The hide and seek of cricket officials 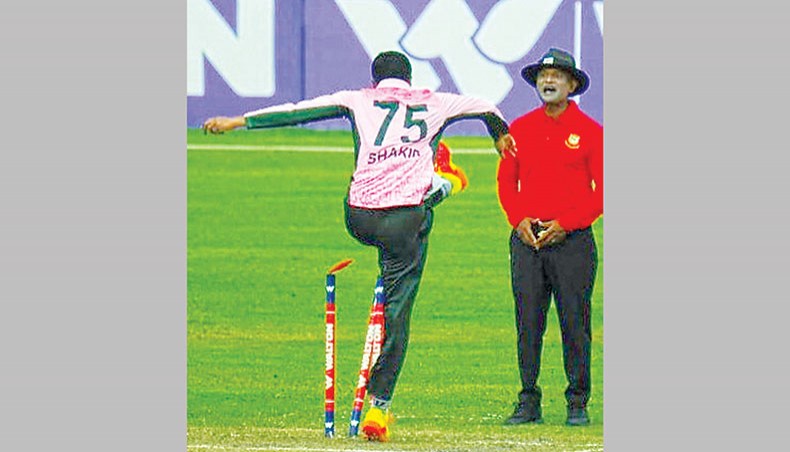 The officials of the Bangladesh Cricket Board and Mohammedan Sporting Club are busy playing hide and seek to dodge the burning issue of Shakib Al Hasan’s sanction which he received for his misconduct during the match against Abahani Limited on Friday.

Mohammedan Sporting Club, through a press release circulated on June 13, invited the media for a press conference where Shakib was supposed to clear his stance for kicking and uprooting the stumps during the Dhaka Premier League match, which cost him a three-match sanction and a penalty of Tk five lakhs.

But on Monday morning, the club circulated another statement where they said that due to unavoidable circumstances the press conference scheduled to take place at 3:30pm in the club pavilion has been suspended.

Mohammedan then issued another statement where they apologised for Shakib’s behaviour and also said that the governing body, club officials and players had a meeting where the cricketers were instructed to follow the rules properly.

New Age tried to contact Mohammedan president and former Army Chief General Md Abdul Mubeen and the club’s cricket committee chairman Masuduzzaman to learn why exactly the media interaction got cancelled but their phones were switched off.

This is not the first instance of officials playing hide and seek with the media regarding this issue as the governing body of DPL, Cricket Committee of Dhaka Metropolis, had done so earlier on Saturday.

The media and communication department of the BCB invited the reporters for a media conference on 7:30pm at Meena Bazar, Dhanmondi which is the personal office of CCDM chairman Kazi Inam.

The message was sent at 6:15pm, which compelled the reporters to rush to the above mentioned address to attend the briefing.

However, the reporters had to return midway as at 6:52pm the media and communication department of the BCB cancelled the briefing.

But soon after the cancellation, the CCDM chairman and BCB’s media committee chairman Jalal Yunus briefed few journalists regarding the sanction of Shakib at the garage of BCB president Nazmul Hasan’s residence in Gulshan.

This sudden change of plans meant that most of the leading media representatives couldn’t be present at the briefing, which shielded the officials from a barrage of scathing questions on the matter they otherwise would have had to answer.

The ongoing DPL has been marred by accusations of biased umpiring and suspicious matches, which have gained more wind due to the added stake to this year’s league.

The top six clubs in this year’s league will get to cast two votes in the forthcoming BCB elections.

BCB is organising this year’s league entirely in a bio-secure bubble, where they had to keep all players, officials and support staff at four different hotels in the capital, which is costing the board a fair bit.

The board is already facing allegations of holding the league in such difficult circumstances to ensure some select teams could end up with the extra vote in the election.

BCB and Mohammedan officials are seemingly playing hide and seek with the media to keep them from spilling the beans on the situation but their attempts to dodge the questions  is only worsening the vulnerable situation they currently find themselves in.