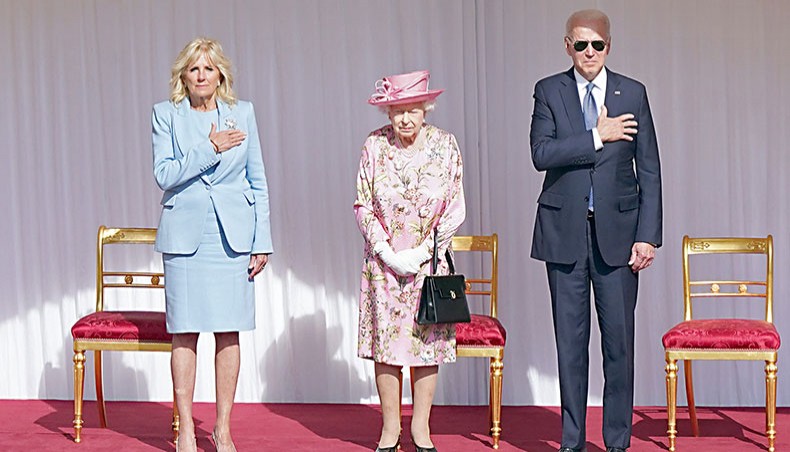 US president Joe Biden, right, and US First Lady Jill Biden, left, stand beside Britain’s Queen Elizabeth II as a Guard of Honour formed of The Queen’s Company First Battalion Grenadier Guards give a Royal Salute during the US National Athem at Windsor Castle in Windsor, west of London, on Sunday. — AFP photo

Joe Biden on Sunday ended the first leg of his maiden overseas trip as US president, inspecting a military guard of honour and taking tea with Queen Elizabeth II.

In bright sunshine, the 78-year-old US leader’s Marine One helicopter landed at Windsor Castle, west of London, after the three-day G7 summit in Cornwall, southwest England, wrapped up.

The Queen, 95 and wearing a pink floral dress with a matching hat, is now back on frontline royal duties after the death of her husband, Prince Philip, in April.

She had met Biden and his wife, Jill, at the summit of G7 leaders on Friday, hosting a reception at the Eden project eco-visitor attraction.

And on Saturday, she reviewed a scaled-down Trooping of the Colour, also at Windsor, as part of her official birthday celebrations.

Sunday’s high-profile reception for the Bidens, which included a military band playing both the British and US national anthems, means she has now formally met 13 of the last 14 sitting US presidents — barring Lyndon B. Johnson — since she took the throne in 1952.

Biden’s predecessor, Donald Trump, visited in June 2019. It was also the monarch’s first in-person meeting with a foreign leader in more than a year, after she was forced into self-isolation because of the coronavirus pandemic.

Biden, in a dark suit, inspected the Grenadier Guards in their red tunics and black bearskin hats on the immaculate lawns of the historic royal palace’s quadrangle.

Some of the soldiers had been involved in the funeral of the Duke of Edinburgh, the queen’s husband of 78 years who died just weeks short of his 100th birthday.

The Bidens at the time paid tribute to the duke, saying: ‘His legacy will live on not only through his family but in all the charitable endeavours he shaped.’

They saluted ‘eyes left’ as they marched past the monarch and the Bidens, who stood to attention under a white canopy, before the dignitaries disappeared inside.

The US First Lady, who is set to return to Washington after the regal reception, while her husband flies on to Europe for further meetings, said Friday it was ‘an exciting part’ of their UK visit.

Afterwards at London’s Heathrow Airport, a short drive away from Windsor, Biden told reporters on the tarmac before boarding Air Force One they had a long talk and the queen was ‘very gracious’.

Biden said he extended an invitation to the monarch to the White House, and added: ‘I don’t think she’d be insulted. She reminded me of my mother.’