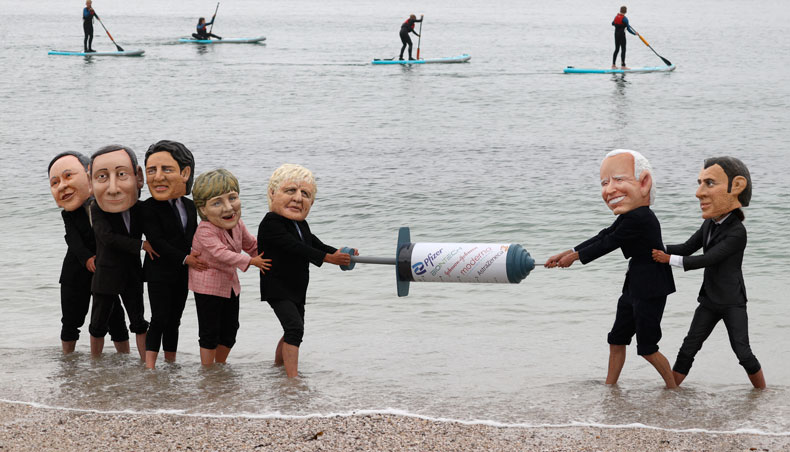 Activists wearing giant heads of the G7 leaders tussle over a Covid-19 vaccine syringe during an action by charity Oxfam to highlight intellectual property for vaccines on Swanpool beach in Falmouth, Cornwall on the sidelines of the G7 summit on June 11, 2021. — AFP photo

G7 leaders on Sunday vowed to start delivering one billion doses of Covid vaccines and to step up action on climate change, in a US-led summit call to arms that also took on China and Russia.

In a final communique issued at their first physical summit in nearly two years, the leaders of the elite club largely hewed to US president Joe Biden’s push to regain the West’s cohesion after Donald Trump’s tumultuous tenure.

‘We will harness the power of democracy, freedom, equality, the rule of law and respect for human rights to answer the biggest questions and overcome the greatest challenges,’ Biden and his colleagues from Britain, Canada, France, Germany, Italy and Japan said.

At a G7 news conference before he headed on to a NATO summit and showdown talks with Russian President Vladimir Putin, Biden said his fellow leaders agreed ‘America is back at the table and fully engaged’.

NATO’s mutual defence was a ‘sacred obligation’ for the United States, he added, arguing that democracies were in a ‘contest with autocracies’ while insisting that Washington was not seeking ‘conflict’ with Beijing or Moscow.

British prime minister Boris Johnson, host of the summit in southwest England, had described Biden as a ‘big breath of fresh air’ and told reporters Sunday that the G7 stood united anew in its ‘democratic values’.

But the pledge on vaccines for poorer nations fell far short of the 11 billion doses that campaigners say are needed to end a pandemic that has claimed nearly four million lives and wrecked economies around the globe.

Likewise, the G7’s pledges to deliver more aid for countries at the sharp end of climate change, and to phase out fossil fuel investments, were decried as too little, too late ahead of a UN summit in November.

‘This G7 summit will live on in infamy,’ said Max Lawson, head of inequality policy at aid group Oxfam.

‘Faced with the biggest health emergency in a century and a climate catastrophe that is destroying our planet, they have completely failed to meet the challenges of our times.’

India and South Africa, who took part in the G7 talks as guests, had pressed for the gathering to waive intellectual property rights on Western vaccines. But Britain and Germany were notable holdouts.

Campaigners also complained the G7 had failed to flesh out how it will pay for a newly agreed ‘Nature Compact’ – aimed to protect 30 per cent of the world’s land and oceans from despoliation by 2030.

Johnson also touted a G7 pledge to get 40 million more girls into schools over the next five years, as part of the post-pandemic reconstruction.

He said such initiatives would marry the West’s intentions to promote democratic values with concrete actions, ‘helping the world’s poorest countries to develop themselves in a way that is clean and green and sustainable’.

For the G7, none of those virtues apply to China’s trillion-dollar Belt and Road infrastructure initiative, which has been widely criticised for saddling small countries with unmanageable debt.

Instead, the allies adopted a US initiative to ‘collectively catalyse’ hundreds of billions of infrastructure investment for a rival G7 plan called the ‘Build Back Better World’ project.

Calling B3W a ‘momentous commitment’, Biden said it would be ‘much more equitable’ than China’s own lending spree in the developing world.

‘China has to start acting more responsibly in terms of international norms on human rights and transparency,’ he added, as the G7 leaders condemned Beijing over rights abuses in Xinjiang and Hong Kong.

French president Emmanuel Macron welcomed the G7’s resurgence under Biden as a ‘collection of democracies’, but said the West also had to work with Beijing.

Biden has ordered US intelligence agencies to report back on whether it came from an animal source or from a laboratory accident.

The G7 also demanded that Russia ‘credibly explain’ the use of chemical agents on its soil, end its ‘systematic crackdown’ on opposition groups and media, and ‘hold to account’ hackers waging ransomware attacks.

Biden will meet Putin on Wednesday in Geneva, and said he would be ‘making myself very clear what the conditions are to get a better relationship with Russia’.

A lingering row between Britain and the European Union over post-Brexit trading arrangements in Northern Ireland hung over the talks.

But London sought to bring all sides together using the ‘soft power’ diplomacy of Queen Elizabeth II and her heir Prince Charles, at a Friday night reception for leaders and EU chiefs.

They then enjoyed an evening beach barbecue Saturday around fire pits, featuring a sea shanty band and toasted marshmallows.

Biden on Sunday became the 13th out of the last 14 sitting US presidents to formally meet the queen, inspecting a royal honour guard at Windsor Castle.

He then jetted out of Heathrow to Brussels for two days of summits with leaders from the NATO military alliance and the European Union.