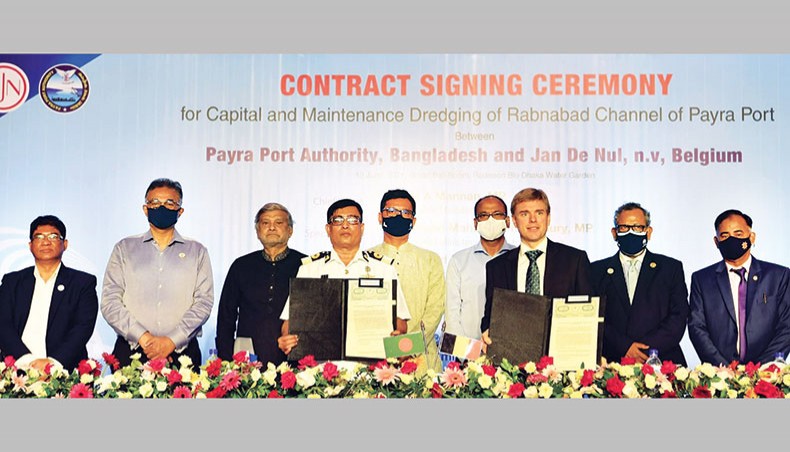 Planning minister MA Mannan is seen along with others at the signing ceremony of a fresh deal with Belgian company Jan de Nul to dredge Rabnabad channel in the Bay of Bengal at a city hotel on Sunday. — New Age photo

The Payra Port Authority on Sunday signed a fresh deal with Belgian company Jan de Nul to dredge Rabnabad channel in the Bay of Bengal at a cost of Tk 56.29 billion over 20 months.

The deal was signed in the presence of planning minister MA Mannan at a city hotel.

The PPA will receive Tk 54.17 billion in euro for the work from the Bangladesh Infrastructure Development Fund, formed by taking funds from the country’s foreign currency reserve.

On March 15, the government announced formation of the development fund with an initial size of $2 billion to finance port and power-related projects.

Under the deal with the PPA, the Belgian company will run a capital dredging to remove around 74.26 million cubic metres of silt for making a draft of 10.4 metres in the 75-kilomtere long channel in 14 months.

Besides, Jan de Nul will run a maintenance dredging for six more months to remove around 14.80 million cubic metres of silt to help the PPA to host 40,000-tonne ships on its docks situated at Kalapara in Patuakhali.

Since the establishment in 2013, the PPA has been trying to dredge the silt-prone channel to enhance viability of the port.

The PPA signed an agreement with Jan de Nul to dredge the channel at a cost of Tk 86.43 billion, which was approved by the cabinet committee on economic affairs in a meeting in October 2020.

Jan De Nul was supposed to arrange the fund as loans.

In February, the government scrapped the deal and decided to fund the project from the foreign currency reserve. The government decided to appoint the Belgian company again and revised the cost to Tk 56.29 billion.

Planning minister MA Mannan hailed the decision of implementing the scheme with the government’s own fund, saying that the move has reduced the overall cost of the Rabnabad Channel Capital and Maintenance Project substantially.