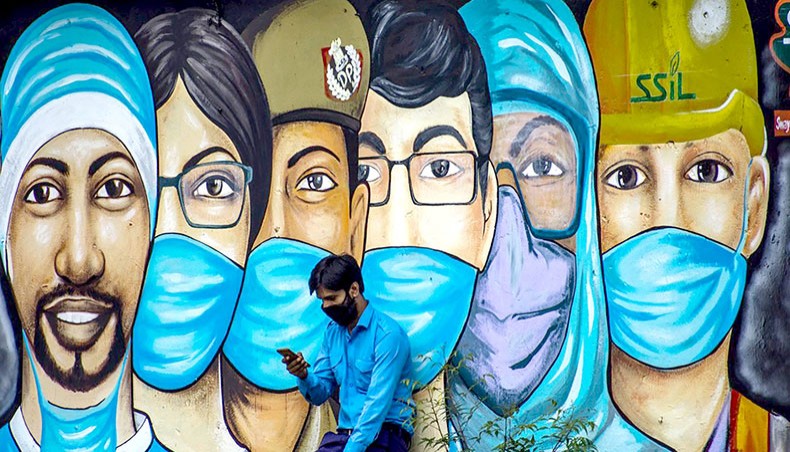 THE first wave of the 1918–1919 influenza pandemic did not have much impact in India; it was the second wave that was the most devastating.

It is now thought that 12 million people died in India during the flu pandemic, the equivalent of four per cent of the population at that time. Most of these deaths were concentrated in a few short months from September to December 1918. This quote is from Punjab’s sanitary commissioner at the time:

‘The hospitals were choked so it was impossible to remove the dead quickly enough to make room for the dying….; the burning ghats (cremation site) were literally swamped with corpses; the depleted medical service was incapable of dealing with more than a minute fraction of the sickness requiring attention.’

Yet, amazingly, this incredible event was barely recorded. While photographic images are widely available for the 1918–1919 flu pandemic in Europe, the United States, and the United Kingdom, there are virtually no such images for India.

A century later, another deadly pandemic is sweeping India, and watching our screens it feels like the only thing that has changed from a century ago is that the impact of the novel coronavirus in India is not hidden; it is on 24-hour news across the world. The Covid-19 pandemic is many terrible things, but unlike the 1918 flu, it at least seems to be being clearly recorded and understood across the world.

Yet, in fact, I think this is far from the case. Instead, brutal historical and existing inequalities are not just shaping how we fight this pandemic but how we are recording it and how we will remember it too.

Twenty years before influenza hit India, there was an outbreak of the bubonic plague. While it did not take nearly as many lives, it was still very serious. Unlike the influenza epidemic, there is a relatively strong photographic and written record of this outbreak. So why no pictures of the influenza pandemic?

One of the obvious differences was that, unlike the flu, other countries were not impacted by India’s bubonic plague. I think part of the reason events in India today are getting so much coverage in the western press is probably because widespread vaccination in rich nations has meant Covid deaths at home have collapsed to very low levels.

Perhaps events in India are so terrible that they would have broken through even during the height of the coronavirus pandemic in the United States and Europe. Yet the pandemic has been as bad in Latin America from the beginning as it has been India, but this has barely registered. Queues for oxygen, overwhelmed graveyards, deaths on the street, privatised health systems leaving the poor to die — all have been pretty much a constant in Latin America for the last year.

This also says a lot about our colonial ties and historic connections. That news from Latin America barely registers time and again is partly because of a linguistic and cultural gap that itself is a product of colonialism.

The other main similarity with the influenza pandemic is something that is perhaps the ultimate inequality: lives and deaths that are not even recorded at all. The official numbers of those testing positive for Covid-19 in most countries have been hugely underestimated — not least because rich countries bought almost all the tests. In Kenya, the government is still testing about 3,000 people a day, and tests cost as much as $100. The United Kingdom is testing a million people a day.

The Economist magazine estimates that the true death toll from Covid-19 so far is more like 10 million people, not three million, and that two-thirds of the deaths have not been in rich nations but in poor and middle-income countries. In Egypt, the level of excess deaths (the difference in the total number of deaths in a crisis compared to those expected under normal conditions) is 13 times the number of official deaths from Covid-19. Yet the story of the last year has been dominated by deaths in rich nations, and the history of the first year of this pandemic is likely to be so too.

This inequality in reporting and measuring, leading to the sense that this pandemic was not very serious in the developing world over the last year, has in turn had a major impact on the response. The drive to get vaccines to the developing world has been criminally inadequate and continues to be so.

The scenes in India, in contrast to a rich world now rapidly heading towards full vaccination, are only now finally making the issue of global vaccine apartheid and the suffering in developing countries bigger news.

Part of the reason the dramatic scenes in India are getting more coverage is in turn a result of inequality. It is because they are happening in Delhi, where global media outlets have their correspondents, and the middle classes are being impacted so tragically. The huge suffering of the poorest and of those in the countryside where there is literally no hope of any medical care of any substance is once again being barely recorded — just as it was in 1918. Independent epidemiologists believe India could be seeing not the official 4,000 deaths a day but in fact as many as 32,000.

Without hard facts, the void is filled by anecdotes and personal stories. It seems likely to me, for instance, that the coronavirus is also raging across Kenya as we speak and is probably more serious now than at any point in the last year — not because the official numbers show this, but simply by the number of people I know who have lost loved ones or been sick themselves in recent weeks and months.

When my friend Doreen died suddenly and tragically from Covid-19 earlier this year, I found out by WhatsApp. I woke up one morning and sent a message to her husband Stuart to see how she was doing. Only the day before her oxygen levels had been stable and things were looking positive. Stuart’s reply was short and devastating: ‘Max she is no longer with us.’

My friends in India dread switching on their phones in the morning for fear of seeing messages about friends who have died in the night. Beyond the selective headlines, maybe these intimate communications are the more accurate record of this terrible moment in our history.

I was reminded of this last week when I heard from colleagues and friends in India. It made me reflect on the many thousands of heart-breaking messages being sent each day, each one bringing with it sadness, loss, rage, and disbelief.

There is no doubt that Covid-19 is a huge global trauma, operating on a personal, family, community, national, and global scale all at once. Its ramifications and implications will be felt for decades to come. In her book on the 1918 influenza pandemic, Pale Rider, the author Laura Spinney asks how we can have forgotten the most lethal episode of the 20th century. I don’t think there is the same danger of humanity forgetting Covid-19.

But I do think that inequalities in the way we measure and record this pandemic have direct implications for how it is understood at the time, how it is responded to, and how it will be remembered.

And it is frightening to think that after all that the world has been through in the last year, that unless something dramatic changes, most deaths from Covid-19 are yet to come. A year ago, the main barrier to beating Covid was science. Today it’s inequality.