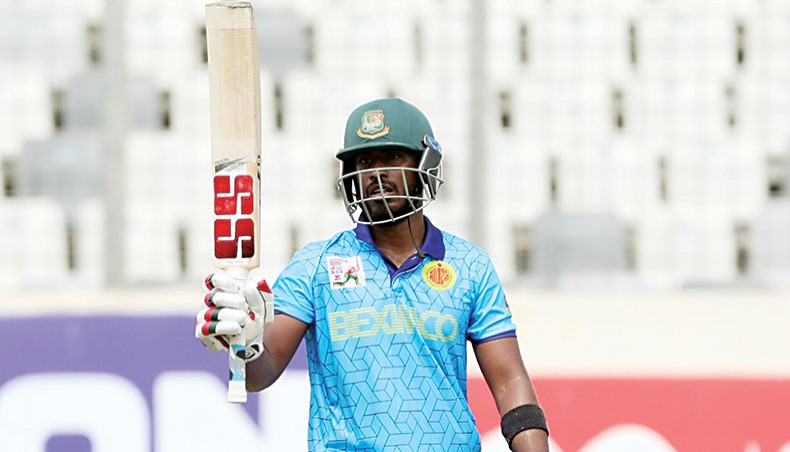 A blistering knock of 92 off 50 balls from Munim Shahriar powered Abahani Limited to a 30-run win in Duckworth and Lewis method over Prime Bank Cricket Club in their eighth round match of the Dhaka Premier League at the Sher-e-Bangla National Stadium in Dhaka on Sunday.

The win took Abahani on par with table-toppers Prime Bank in terms of points, as both teams now have 12 points, but the latter edged the former by the virtue of a better net run rate.

Abahani matched its own record of the highest team total in this season so far, posting 183-5 after opting to bat first.

Munim, who brought up his career best T20 score and also the highest innings in the league so far, got some support from Nazmul Hossain (30) and Mohamad Naim (29) to take Abahani to a daunting total.

Due to rain interruptions, Prime Bank was set a revised target of 174 off 19 overs, which they fell well short of.

Tamim Iqbal made 55 off 41 balls but did not receive any support from the other end as Prime Bank kept losing wickets at regular intervals and finished on 143-6.

At BKSP, Mohammedan Sporting Club, who took the field without skipper Shakib Al Hasan who is serving a three-match ban for his actions during the Abahani match, beat Old DOHS Cricket Club by five runs in the D/L method.

In reply, Old DOHS were 115-4 after 16 overs when the rain came and later Mohammedan was declared the winners by five runs in D/L method.

In the other matches, Sheikh Jamal Dhanmondi Club beat Legends of Rupganj by seven runs and Brothers Union beat Shinepukur Cricket Club by one run, both games getting decided in D/L method.