BRAC to strengthen advocacy to safeguard employees from sexual exploitation 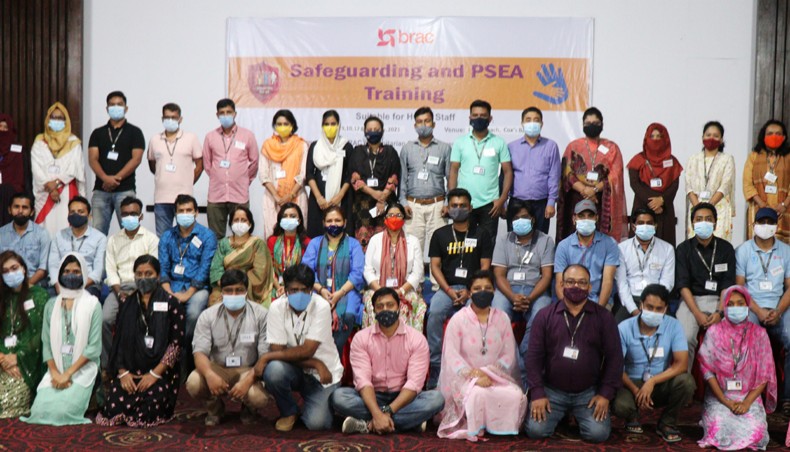 Participants in the concluding session of ‘Safeguarding and PSEA Training’ organised by BRAC at a hotel in Cox’s Bazar pose for photo on Sunday. --- Press release

BRAC, one of the largest non-governmental organisations in the world, will strengthen advocacy activities on safeguarding its employees from sexual exploitation and abuse.

This was disclosed at a training programme on safeguarding employees and Protection from Sexual Exploitation and Abuse, which concluded at a hotel in Cox’s Bazar on Sunday.

About 160 trainees under different programmes of HCMP of BRAC participated in the four-day training, organized by HCMP of BRAC.

BRAC will further strengthen advocacy activities in the days to come by raising awareness among its employees through such training programmes.

The training was aimed at raising awareness on the issue of ensuring a safe atmosphere for employees, partners, beneficiaries, volunteers, suppliers, Rohingyas and the host community of BRAC by protecting them from abuse and exploitation.

Hasina Akhter Huq, area director of HCMP of BRAC, Hasne Ara Begum, technical head of Gender-Based Violence of HCMP, among others, spoke on the concluding day.

Farzana Siddiqua, manager of the training and safeguarding unit of HCMP of BRAC, moderated the event.   Khondoker Shafiqul Alam and Nitu Barua of Learning and Leadership Development Programme of BRAC conducted the training at the concluding session.

Kirtee Bejoya and Rezaul Kabir were present as trainers on behalf of BRAC.

In her speech, Hasne Ara Begum said that BRAC was eager to create a good culture for protecting its employees and keeping atmosphere of workplace safe by utilizing its values.

In her speech, Hasina Akhter Huq said that safeguarding was not merely an issue of employees’ protection.

‘Rather, it should now be considered as a responsibility so that we ourselves being conscious can maintain the proper atmosphere at our workplace,’ she said.