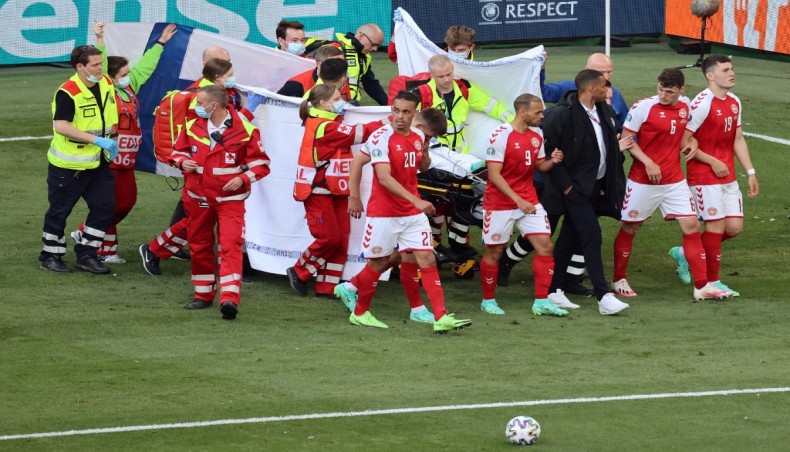 Denmark players gather as paramedics attend to midfielder Christian Eriksen during their UEFA Euro 2020 match against Finland at the Parken Stadium in Copenhagen on Saturday. — AFP photo

Denmark's team doctor said Sunday there was still ‘no explanation’ for why midfielder Christian Eriksen collapsed during his country's opening Euro 2020 game against Finland, but confirmed he had suffered a cardiac arrest.

‘He was gone, and we did cardiac resuscitation,’ team doctor Morten Boesen told a press conference.

‘How close were we? I don't know. We got him back after one defib (defibrillation), so that's quite fast,’ Boesen added.

However, the physician also said they had yet to discover that cause of the 29-year-old's heart attack.

‘There's no explanation so far,’ Boesen said, adding that all tests done so far on the player, who is still in hospital, have come back fine.

‘That is also one of the reasons that he is still in the hospital,’ the physician added.

The Inter Milan star suddenly collapsed in the 43rd minute of Denmark's Group B game against Finland on Saturday, laying motionless as medical personnel administered CPR.

He laid on the field for about 15 minutes before being carried off the pitch and rushed to hospital.

The game was temporarily suspended awaiting updates on Eriksen's health, but resumed later in the evening after reports filtered through that the player was in a stable condition and awake. It ended in a 1-0 win for debutants Finland.

Players in the Danish team were given the option to continue the game or postpone it, but on Sunday head coach Kasper Hjulmand said he regretted the decision.

‘I honestly don't think that we should have been on the pitch again,’ Hjulmand told reporters.

Hjulmand added that Eriksen had told him he wished for the team to carry on playing in the tournament.

‘Christian wishes that we should continue playing, so we will do that. We want to play for Christian,’ Hjulmand said.