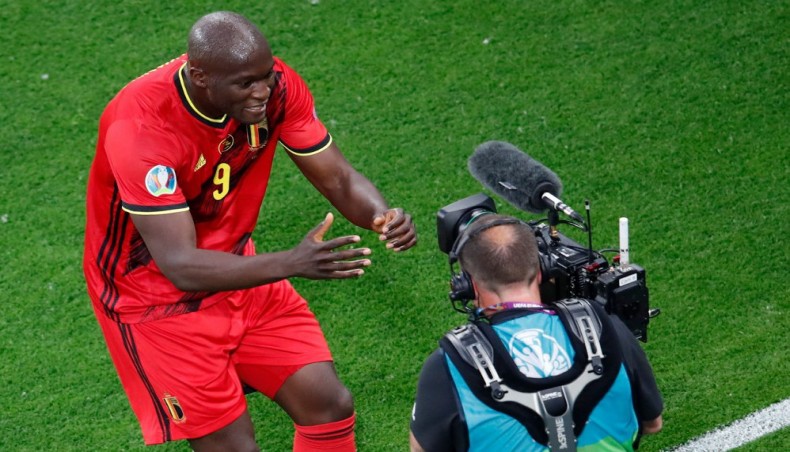 Belgium forward Romelu Lukaku (L) celebrates in front of a camera after scoring his team's first goal during their UEFA EURO 2020 match against Russia at the Saint Petersburg Stadium in Saint Petersburg on Saturday. — AFP photo

Belgium striker Romelu Lukaku sent a message of support to his stricken Inter Milan team-mate Christian Eriksen after scoring, as his double helped the Red Devils open their Euro 2020 campaign with a 3-0 win over Russia on Saturday.

Lukaku gave Belgium an early lead in Saint Petersburg, then shouted ‘Chris, Chris, stay strong -- I love you’ into a pitchside camera during the celebration for his opening goal.

His club team-mate Eriksen is recovering in hospital in Copenhagen after collapsing on the pitch during extraordinary scenes which overshadowed Denmark's 1-0 home defeat by Finland in Saturday's earlier Group B game.

Substitute Thomas Meunier doubled Belgium's lead on 34 minutes before Lukaku put the result beyond doubt with a late second goal.

Belgium, the world's top-ranked team, are under pressure to deliver at the European Championship as some pundits claim this is Roberto Martinez's last chance to win a title with an ageing squad.

Yet even with Manchester City playmaker Kevin De Bruyne and Borussia Dortmund midfielder Axel Witsel sidelined by injury, Belgium were too strong for Russia.

The hosts got off to a bad start when Andrei Semenov failed to deal with a cross by Dries Mertens in the build-up to the opening goal.

The ball fell to Lukaku, who span away and drove his shot into the bottom far corner on 10 minutes.

Belgium's Timothy Castagne and Russia's Daler Kuzyaev had to be helped off following a nasty clash of heads which saw both players substituted.

Meunier, Castagne's replacement at right-back, grabbed Belgium's second by slotting home the rebound after his Dortmund team-mate Thorgan Hazard swung in a cross which Anton Shunin failed to hold.

It stayed 2-0 at the break, but Russia raised the tempo in the second half as Roman Zobnin fired over the Belgian goal.

With two minutes left, Lukaku swept Meunier's pass into the Russian net to claim his 20th goal in his last 15 international games.

Before kick-off, the Belgium team were booed for taking a knee to highlight racial injustice, while their Russian opponents stood.

Jeers echoed around the Krestovsky Stadium as the entire Belgian team, as well as Spanish referee Antonio Mateu Lahoz, knelt, while Lukaku, whose parents come from the Democratic Republic of Congo, raised his right fist.

England have said they will do the same for their opening game of the European Championship against Croatia on Sunday.

The gesture has become a familiar sight across a range of sports since George Floyd, who was black, was killed by a white police officer in the United States last year.