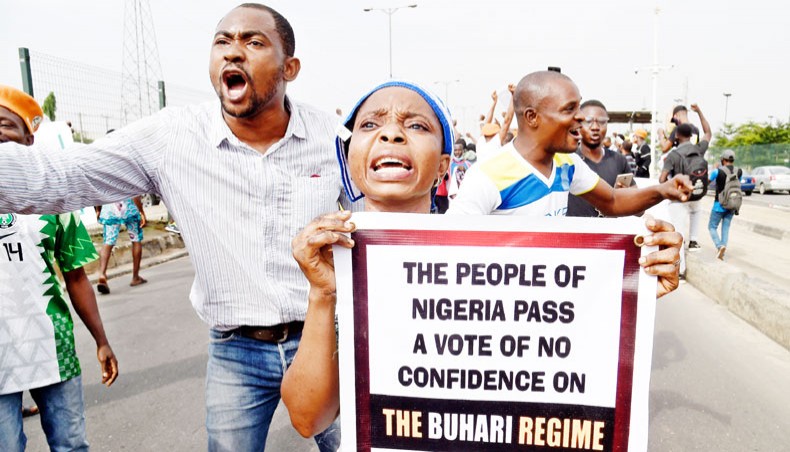 A woman carries a banner during a demonstration at Ojota in Lagos on Saturday, as Nigerian activists called for nationwide protests over what they criticise as bad governance and insecurity, as well as the recent ban of US social media platform Twitter by the government of president Muhammadu Buhari. Hundreds of protesters gathered on Saturday in Lagos, a sprawling megapolis of over 20 million people, and police fired tear gas to disperse the crowd. —AFP photo

Scores of motorcycle-riding gunmen called bandits by locals on Thursday through Friday, invaded the villages of Kadawa, Kwata, Maduba, Ganda Samu, Saulawa and Askawa in the Zurmi district, shooting residents, they said.

The gang attacked farmers in their fields and pursued others who fled to escape the assaults.

Zamfara police spokesman Mohammed Shehu said 14 bodies had been taken to the state capital Gusau on Friday, and added that "policemen deployed in the area following the attacks."

Local residents said 39 more bodies had been recovered and buried in the neighbouring town of Dauran.

‘We recovered 28 bodies yesterday and 11 more this morning from the villages and buried them here,’ said Dauran resident Haruna Abdulkarim.

‘It was dangerous to conduct the funeral there because the bandits are harbouring in the Zurmi forest and could return to attack the funeral,’ said another resident, Musa Arzika who reported the same death toll.

Villages in the Zurmi district have been repeatedly raided by bandits, and local residents blocked a major highway last week, calling on the authorities to end the attacks.

Northwest and central Nigeria have in recent years fallen prey to gangs of cattle thieves and kidnappers who raid villages, killing and kidnapping residents in addition to stealing livestock after looting and burning homes.

The criminals have begun to focus on raiding schools and kidnapping students for ransom.

More than 850 students have been abducted since December but most have been released after ransom payments.

The gangs are largely motivated by financial gains and have no ideological leanings but there is growing concern of their infiltration by jihadists from the northeast waging a 12-year-old insurgency to establish an Islamic state.

Military operations and amnesty offers have failed to end the attacks.

In a broadcast on Friday, Zamfara state governor Bello Matawalle urged residents to defend themselves against ‘killer bandits.’