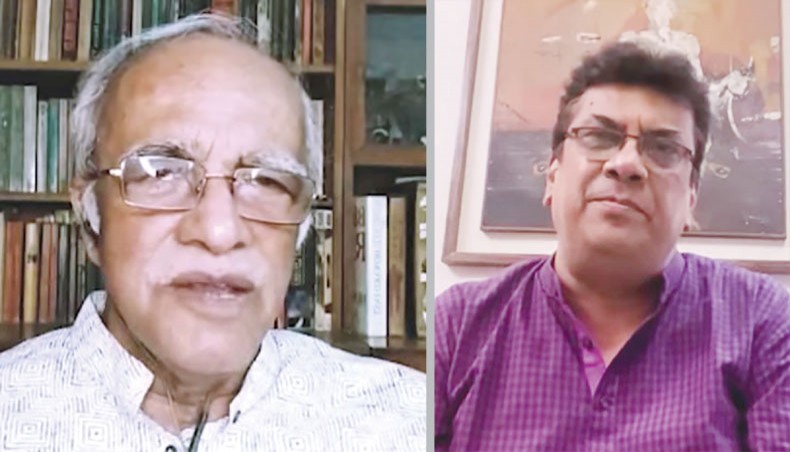 Cultural organisation Chhayanaut paid tribute to the late renowned musicians, who died in 2020 and 2021, organising an online programme on Friday night.

The programme titled ‘Tomader Smari’ was streamed live at the Facebook page of the organisation and YouTube channel named Chhayanaut Digital Platform at 8:00pm on Friday.

‘We are going through a tough time. We lost many artistes who taught at Chhayanaut. We want to pay tribute to them in today’s programme,’ said Laisa Ahmed Lisa.

Mofidul Hoque spoke on the life and work of Nilotpal Sadhya at the programme.

Cultural activist, singer and music teacher Nilotpal Sadhya was born in Dhobaura village under Mymensingh district on December 6, 1955. He died on March 17, 2020.

‘Nilotpal Sadhya started learning music at an early age. He was greatly inspired by Pankaj Kumar Mullick’s singing when he was an adolescent. He was a dedicated music teacher and involved with Chhayanaut and Bangladesh Rabindra Sangeet Sammelan Parishad,’ said Mofidul Hoque.

Following which, a song Kheya ghater patni esechhe, recorded by Nilotpal Sadhya, was streamed at the event.

‘Flora Ahmed was a leading Tagore singer, even though not many videos of her songs can be found today. Her songs help me find peace,’ said Lopa Ahmed.

Khairul Anam Shakil shared his memories of Azad Rahman at the event.

Noted music maestro Azad Rahaman was born to Khalilur Rahman and Ashrafa Khatun in Bardhaman, India on January 1, 1944. He was the eldest among eight children of the couple.

‘I met Azad Rahaman for the first time in the late ‘60s, when I was a first year student at Chhayanaut. Azad Rahaman had to struggle a lot to make a name for himself as a musician in the country’s music industry after he migrated to Dhaka from India,’ said Khairul Anam Shakil.

‘He joined as a music director at Bangladesh Betar and continued to pursue classical music. He made outstanding contribution to the country’s music scene,’ added Shakil, who also paid tribute to Azad Rahman rendering a kheyal.