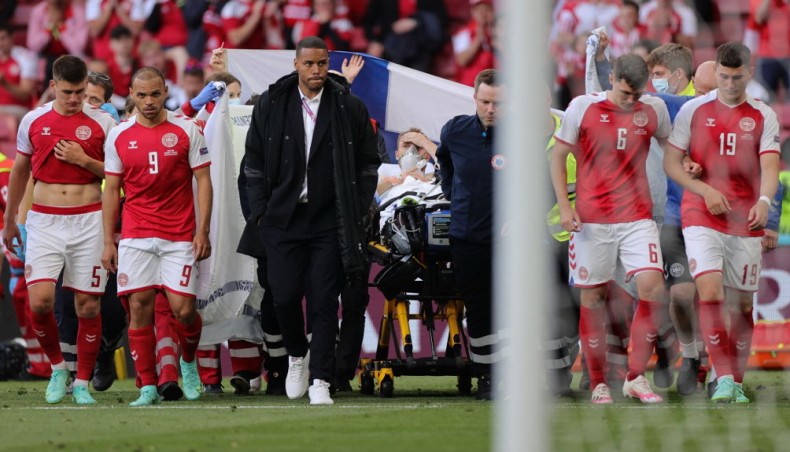 Denmark's players escort midfielder Christian Eriksen (C) as he is evacuated after collapsing on the pitch during their UEFA EURO 2020 match against Finland at the Parken Stadium in Copenhagen on Saturday. —AFP photo

Finland beat Denmark 1-0 in their opening match of Euro 2020 which was overshadowed by Christian Eriksen collapsing and having to be revived on the field by medics.

Joel Pohjanpalo scored the only goal on the hour mark of a Group B match which was stopped for nearly two hours after Danish playmaker Eriksen slumped to the turf towards the end of the first half.

There were fears for his life as he was given CPR by medics on the pitch as his teammates, some distraught, formed a circle around him.

The stadium had fallen into a shocked silence as the medics worked but Eriksen was eventually carried off the field at the Parken Stadium in Copenhagen and a photo showed him apparently holding his head as he laid on the stretcher.

The Danish Football Union (DBU) said the Inter Milan player was awake and had been able to speak to teammates.

‘We've been in contact with him, and the players have spoken to Christian,’ DBU director Peter Moeller told Danmarks Radio (DR).

‘That's the great news. He's doing fine, and they are playing the game for him,’

The match, which had kicked off at 1800 local time (1600 GMT), resumed two-and-a-half hours later in front of a passionate crowd at the Parken Stadium.

Chants of ‘Christian’ and ‘Eriksen’ from both sets of supporters rang around the stadium as news of his status began to filter through to supporters.

The two teams played out an uneventful final few minutes of the first half after both sets of players returned to the pitch with several Danish players in tears.

After a short break of five minutes the second half of the match continued with a similar pattern as before Eriksen's collapse, with Denmark pressing Finland back but failing to find a way past the opposition defence and Finnish 'keeper Lukas Hradecky.

Pohjanpalo stunned the crowd into silence with when he headed home Jere Uronen's cross, capitalising on Finland's one true chance of the game.

Shorn of the creativity of their shining light Eriksen, the Danes struggled even more to break down the tightly-organised Finns and looked as though they would need some good fortune to get something from the match.

They thought they had got it when Yussuf Poulsen was brought down in the area by Paulus Arajuuri in the 73rd minute, but Pierre-Emile Hojbjerg's weak spot-kick was easily saved by Hradecky.

The Danes piled on the pressure but apart from a few skirmishes in the box failed to cause their opponents much trouble and had to deal with defeat which will likely seem unimportant given what happened earlier in the evening.