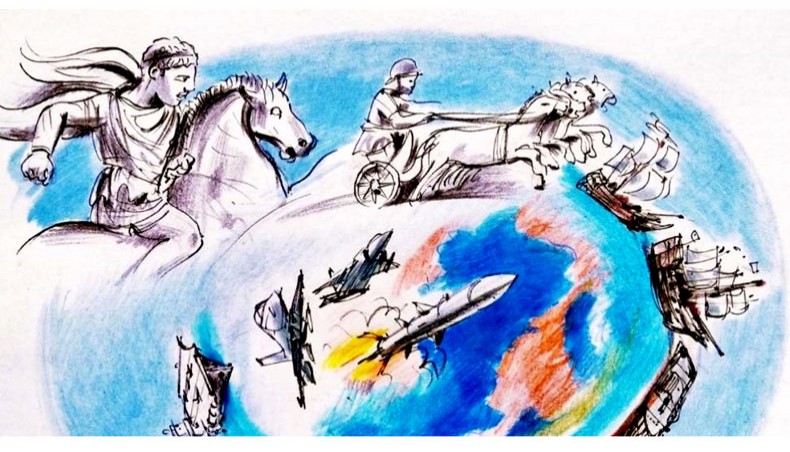 DEVELOPMENTS on the world stage are stunning. Almost every day, geopolitical incidents and moves appear magical.

The developments challenge the empire’s geopolitics in regions. Months ago, the empire gave an impression that it will regain ground whatever has been lost, prestige that slipped down from its crown. Immediate moves were taken, at least for public view. Those were image-rebuilding moves and some other ‘things’.

As part of that image-rebuilding exercise and something extra, war ships were ordered to cross certain straits, a carrier group was ordered to navigate a certain sea, a certain country — China — was identified as the chief foe, a certain leader — Putin — was identified as ‘killer’ and certain talks were held in Tokyo and some other capital cities and in a certain city — Anchorage in Alaska — attempts were made to press Iran to go back to a position not comfortable for Tehran, the Ukraine border was made hot, which led at least one analyst to write that Ukraine was back at the centre of geopolitics (Vijay Prashad, ‘Why Ukraine’s borders are back at the center of geopolitics’, MR Online, April 8, 2021) — a dead analysis that was.

The entire pose was — ‘see, the Empire is back again’. But those were the empire’s public postures, for public consumption, for regaining lost seat in public mind.

Within days, reports appeared that war ships were not crossing that strait used to reach Russia, the carrier group failed to coerce China to change China’s course, Iran was standing fast with its stand on withdrawal of sanctions, Moscow called back its ambassador from Washington DC for ‘consultation’ on the ‘killer’ utterance, who passed weeks in Moscow, the US ambassador in Moscow was called to the Russian foreign ministry and was told to visit Washington DC for consultation, and many such moves by Moscow and Beijing, Moscow ordered limiting employing locals in diplomatic missions, and raised the issue of treatment of Capitol demonstrators.

Around the same time, China reminded the empire of COVID deaths, etc. in the empire whenever the power considering guardian of rights around the world raised the issue of rights in China. (‘In the United States hundreds of thousands of innocent people died of Covid-19, people like George Floyd cannot even breathe freely,’ Chinese foreign ministry spokesperson Zhao Lijian said during a regular press conference in mid-January.) Beijing also raised the issue of democracy that the empire markets around the world. (In late April, Chinese foreign minister Wang Yi urged the United States to abandon its ideological approach to foreign policy, arguing that it is wrong of the United States to try to model the rest of the world in its own image. Speaking with the US Council on Foreign Relations via video link, Wang called on the United States to seek peaceful coexistence with Beijing and accept that China has chosen an independent path and system. ‘Democracy is not Coca-Cola, which, with the syrup produced by the United States, tastes the same across the world. The world will be lifeless and dull if there is only one single model and one single civilization’, the Chinese minister noted.) The Anchorage meeting was extraordinary in real terms: China talked tough — unexpected to the empire.

There are the mobilisation and de-mobilisation of Russian forces near its border — a message that was from Moscow. Putin was not rough in making response to a claim by a president that Putin was ‘mmm killer’. Rather, his response was sober and mild — the Russian president cited a proverb from his country: A man sees his image around. The ‘killer’ utterance was so embarrassing that it turns difficult to refer.

Days later, Putin cautioned: Teeth will be knocked out whoever tries to bite Russia. (Russia’s president Vladimir Putin said in late May that Moscow would ‘knock out the teeth’ of any power that tried to take a chunk of Russia’s territory.) The tone was non-submissive. Days later, a high Russian official said: Russia will respond to acts hostile to it not by sanction, but by actions.

The duo — China and Russia — is going for gold at a tremendous speed. Someone can satirically say Russia and China are ‘hoarding’ gold — building up a huge gold godown. The gold speed is almost unprecedented; and the gold size is significant. Russia is swiftly de-linking a part of its financial arrangement from the imperial dollar. The quantity of oil China consumes now, and going to consume, carries a deep meaning. The strategic relation that Iran has established recently with China should not be ignored. With Russia, Iran’s similar move in the future should not go unnoticed.

China and Russia are conducting a significant portion of their trade with many countries with local currencies, not the imperial buck. All of those countries are not in the Russia or China ‘periphery’. In reality, no such periphery exists now. A few of these countries are strongly tied to the imperial geo-strategy or boundary.

The world has changed a bit since Trump ascended the throne in his country. The planet has changed further, bit by bit, since Trump left the famous house symbolising a presidency.

The current occupants of the house are well aware of the changed reality. So, they have not jumped into any adventure immediately after their ascension to the throne. That — jumping into something without a thorough homework — is not the way. They, the non-Trumpian faction, are that much smart and wise.

So they are testing waters, fathoming depths, withdrawing from areas and regrouping, posturing and re-posturing, trying to coordinate with allies, some of whom are not always in tune, and fine-tuning the already framed strategy and tactics. Building tension on the Ukraine border, ordering a few warships and a carrier group to certain areas, the Anchorage meeting, NATO exercise in Europe, etc are part of these — posturing, etc.

But something is coming to light — a significant change on the world theatre. The imperial world order is not going without questions. ‘Sceptics’ or the wise keeping eyes to the wind direction — investment and market opportunities included — are not banking solely on the imperial world order as they know military might is not the sole determining factor in a competition or war. Even, that might — military — is changing the existing equilibrium. More changes are coming. Moreover, military might does not dwell on tank turrets and in gun barrels. Neither does it stay awake with AIs. It has a basis — economy and society. Military history is full with this description. If someone dislikes going through the pages of that history, analysts can look towards the hated Nazis and its leader — the hated Hitler. The empire’s economy is to be examined. It is in a difficult condition. Putin has recently expressed condition that empires face: The problem of empires is that they think they are so powerful that they can afford small inaccuracies and mistakes. Empire rulers are confident they can intimidate, persuade or buy loyalty of various nations or groups and think that all their problems can be solved this way. But Putin indicated that empires fail with that approach.

This condition is reflected in the factional fight, another story to be told some other day, of the ruling classes in the empire. The people in the empire are now war-weary. Are there other parts of the state machine war-tired? Reports will find. A few reports claim that the empire is not in a position to repair its damaged war ships if there is a war with China or Russia today.

The ongoing pandemic has a role in exposing or shattering myth with the empire’s power, might, capacity, arrogance. Should the pandemic not be cursed? Even, the empire’s pandemic diplomacy — the doling out of vaccines — is incapable of satisfying all its allies and possible allies, some of whom consider money can buy vaccines, which is not a correct assumption, or imagination, now, on this vaccine market.

The entire scene now unfolding on the world stage, thus, is not like the usual. It is, rather, a challenging appearance to the imperial geopolitics.