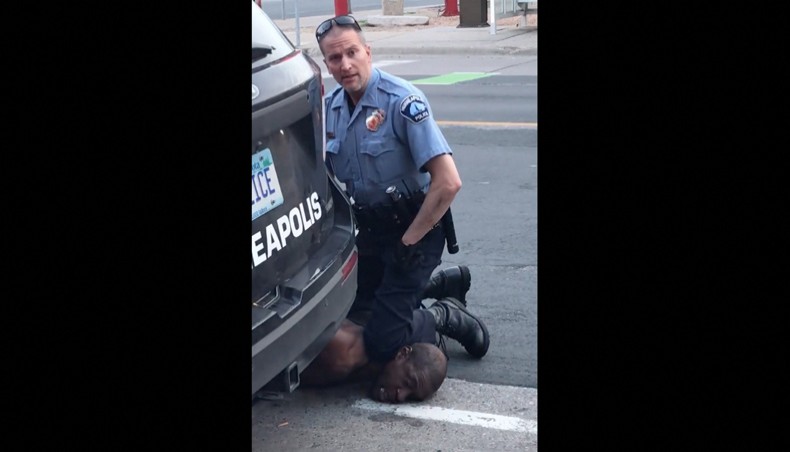 This still image taken from a May 25, 2020, video courtesy of Darnella Frazier via Facebook, shows Minneapolis, Minnesota, police officer Derek Chauvin arresting George Floyd. The Pulitzer Prize Board awarded a ‘special citation’ on June 11, 2021, to Darnella Frazer, whose video of the murder of George Floyd by a police officer, sparked worldwide protests against racial injustice. Frazer was honored at a ceremony announcing the 2021 prestigious journalism awards for her "courageous" reporting of Floyd's May 2020 murder. -- AFP photo

The Pulitzer Prize Board awarded a ‘special citation’ on Friday to the teenager whose video of the murder of George Floyd by a white police officer sparked worldwide protests against racial injustice.

Frazier was being recognized ‘for courageously recording the murder of George Floyd, a video that spurred protests against police brutality around the world, highlighting the crucial role of citizens in journalists' quest for truth and justice,’ the citation said.

Frazier was also among the witnesses who testified at the trial of former Minneapolis police officer Derek Chauvin, who was convicted in April of Floyd's May 25, 2020 murder.

In the video taken by Frazier, Chauvin is seen kneeling for more than nine minutes on the neck of Floyd, a 46-year-old Black man, as bystanders urge him repeatedly to get off and Floyd says that he can't breathe, before losing consciousness.

The staff of the Star Tribune of Minneapolis was awarded the Pulitzer in the breaking news category for its coverage of Floyd's death and its repercussions.

The New York Times was honored with the public service prize for its ‘courageous, prescient and sweeping coverage’ of the coronavirus pandemic.

Online outlet BuzzFeed won its first Pulitzer -- in the international reporting category -- for coverage of prison camps built by China for mass detention of Muslims.

Ed Yong of The Atlantic received the prize for explanatory reporting for a series of ‘lucid, definitive pieces’ on the Covid-19 pandemic.

Reuters was honored in the same category for an examination of the legal doctrine of qualified immunity and how it is used to shield police from prosecution.

The Associated Press won the Pulitzer for breaking news photography and an AP photographer, Emilio Morenatti, was honored for feature photography.

‘The Night Watchman’ by Louise Erdrich was awarded the prize for fiction while ‘Wilmington's Lie: The Murderous Coup of 1898 and the Rise of White Supremacy’ by David Zucchino was honored for non-fiction.

The biography prize was given to ‘The Dead Are Arising: The Life of Malcolm X’ by the late Les Payne and Tamara Payne.

‘Postcolonial Love Poem’ by Natalie Diaz was the winner in the poetry category; ‘The Hot Wing King’ by Katori Hall won the drama prize, and ‘Stride’ by Tania Leon won for music.