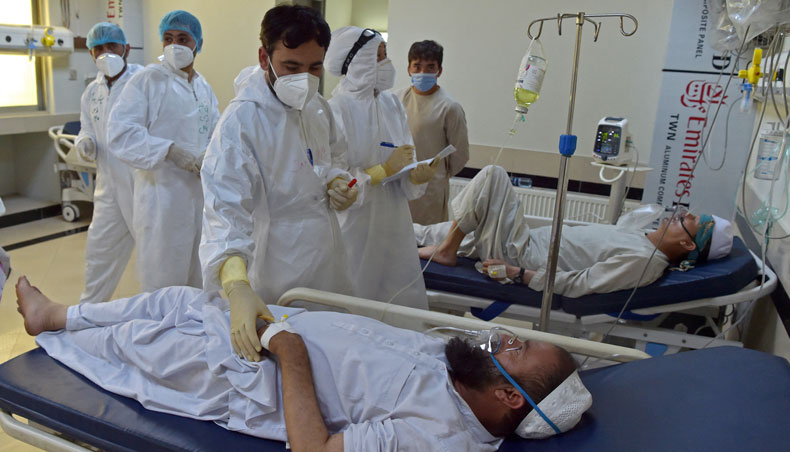 In this photograph taken on June 8, 2021, medical personnel treat Covid-19 patients at the intensive care unit of the Muhammed Ali Jinnah hospital in Kabul. — AFP photo

On his emergency room bed in Afghanistan’s capital, you can barely hear Said Ali Shah speak through the oxygen mask plastered to his face.

He was taken to the Muhammed Ali Jinnah hospital ‘out of breath’ by his wife, he says, and is only just able to sit up after four days in intensive care.

The 50-year-old, like some other Afghan patients, refuses to accept the reality of his condition.

‘He has tested positive, but we avoid telling patients who arrive in this unit. Otherwise, they think they are going to die and lose all hope.’

Officially Afghanistan has recorded fewer than 90,000 infections, with around 3,400 deaths, but health experts say a lack of testing and the refusal of patients to seek treatment hides the true figures.

And the situation is only getting worse.

‘In one week, we recorded an increase of nearly 200 percent in cases,’ said minister of health Wahid Majrooh.

Now, the main concern for officials is ensuring they have enough oxygen.

‘The next four weeks will be difficult,’ said Majrooh. ‘We must prepare for the worst.’

In a country wracked by decades of war, with foreign forces hastening their withdrawal, and having to live daily with the threat of bomb blasts or targeted assassinations, many Afghans feel they have bigger things to worry about than a virus.

‘You see people without masks in front of hospitals, accompanying their loved ones in critical condition,’ said doctor Amiri.

At the hospital entrance, a nurse offers Covid-19 tests and masks to those bringing sick relatives for treatment.

‘People prefer to stay at home and self-medicate without being tested,’ he said, adding that there was a stigma attached to having contracted Covid-19.

‘They arrive here much too late, when they are already breathing badly,’ said Akbari, adding that sometimes three or four members of one family test positive at the same time.

A national vaccination campaign has moved slowly, with less than a million doses administered in the country of nearly 34 million people.

Part of the fault lay in starting it during Ramadan, as many people believed that having a vaccine jab would break their fast.

The recent Eid al-Fitr holiday that ended the holy month also saw large numbers of people travelling across the country to reunite with families, spreading the virus on crowded public transport.

Add to that the fact that India is one of the few countries that still has regular flights to Afghanistan, bringing the fast-spreading Delta variant that emerged there.

‘There are a lot of exchanges between the two countries,’ said Akbari, adding that the new variant appeared to be hitting younger people more.

Akbari and the health minister both agree that the official figure of around 55-60 deaths a week is wrong.

‘You can easily multiply it by two or three – even more,’ said Akbari, adding, ‘And who keeps count in rural districts?’