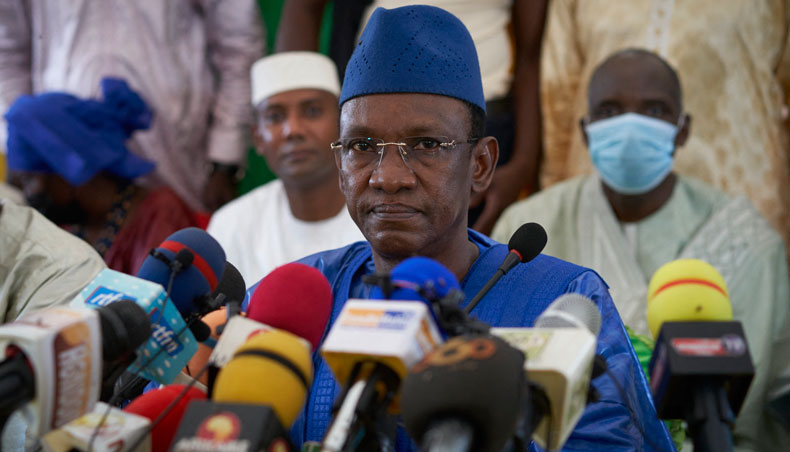 In this file photo taken on May 28, 2021 Choguel Maiga, leader of the coalition Mouvement du 5 Juin-Rassemblement des Forces Patriotiques, speaks to the press as the coalition proposed his candidature to the primature after that colonel Assimi Goita led a coup to overthrow the government. — AFP photo

Mali announced a new government on Friday in which key roles were retained by army figures, according to a statement read out on the national broadcaster.

The announcement comes after Colonel Assimi Goita, who led a coup last month, was named transitional president on Wednesday and appointed a civilian as his prime minister.

Goita had already led a coup last August, when he and other army officers ousted elected president Ibrahim Boubacar Keita after weeks of mass protests over corruption and the long-running jihadist conflict.

After the West African ECOWAS bloc imposed sanctions, the military junta handed power to a civilian-led transitional government, which promised to restore civilian rule in February 2022.

But Goita deposed its leaders on May 24 over a government reshuffle that side-lined some officers involved in the August putsch.

The second coup in nine months sparked diplomatic uproar, with the African Union and the 15-nation Economic Community of West African States suspending Mali in response.

France, which has thousands of troops stationed in the war-torn country, also suspended military cooperation with Mali.

The former colonial power followed on Thursday by announcing that it would wind down its 5,100-strong Barkhane force that has battled jihadists in the Sahel since 2013.

Earlier, Goita had pledged to restore civilian rule in the poor nation of 19 million.

The colonel appointed a civilian prime minister on Wednesday, in keeping with international demands, and said that he would stage elections next February.

ECOWAS had been pushing for the prime minister, Choguel Kokalla Maiga, to form a government from an inclusive cross-section of Malian society.

According to the statement announced on Malian television, military officers have received the strategic ministries of defence, security and national reconciliation.

Sadio Camara, one of the officers side-lined in the reshuffle that provoked the latest coup, was reappointed as defence minister.