BUDGET 2021: No reinforcement for youth and education sector 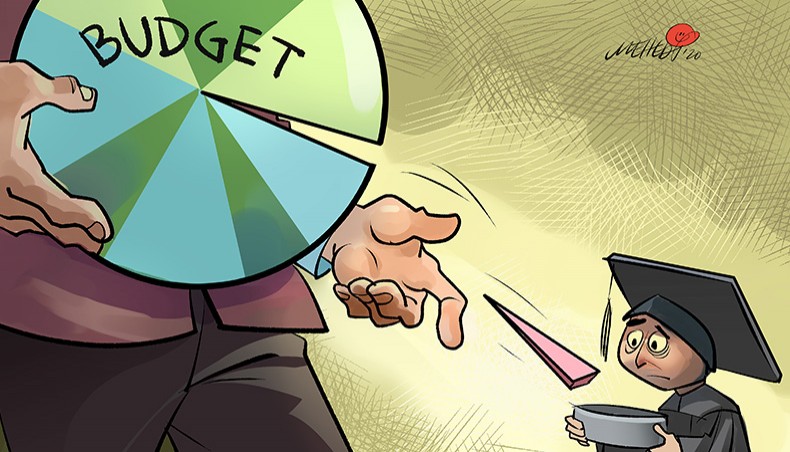 National budget for the 2021-22 financial years shows little to no regard for the education sector and for the youth. A manifold increased budget to compensate the lost time of the students due to the pandemic and a solid plan was of utmost importance. Creating an online education-friendly inclusive infrastructure and skill development training for school dropouts could help the country and the economy in the long run. The policymaking authorities certainly think otherwise, writes Nahid Riyasad

All the educational institutions are closed for more than a year now due to the COVID-19 pandemic. Private schools, colleges and universities have opted for online education while public ones are yet to formulate a definitive plan for their reopening. In this condition, the Bangladesh government announced the budget for the financial year 2021-22 with little to no regard for the education sectors new needs and skill development of youths.

The budget needed to address two specific areas — allocation for creating a robust online education-friendly network among students of all socio-economic backgrounds and offering skill-building opportunities for the youths who dropped out due to the pandemic.

On April 29, 2021, in an online government dialogue titled ‘Education Devastated by Covid-19: What type of budget do we want?’ speakers emphasised a beefed-up budget for the education sector and the youths.

The dialogue revealed that around 40 million students of 200,000 educational institutions of the country had been affected by the ongoing pandemic. Both the planning minister and education secretary said that the education budget needed to be increased to meet the crisis posed by the pandemic.

The current government’s narrative of development and boasting about high GDP growth is indeed short short-term infrastructural development rather than long term nation-building — both philosophically and in terms of skills. Otherwise, the government would have maintained at least the south Asian standard of four per cent of the GDP to the education sector.

One of the major factors overlooked in the budget is the specific allocation and plans for including the majority of the students on online educational platforms. In a series of stories, New Age Youth discussed that how the infrastructure to execute an inclusive online education programme is non-existent. Poor network connection with high data price, the economic ability to afford a smart device and teachers’ lack of training in online education are some of the obstacles.

According to the Bangladesh Bureau of Educational Information and Statistics 2019 report, there are a total of 171,779 educational institutes across the country with a little over 39.83 million students.

The Bangladesh government is aiming to bring 40 million students under a programme Amar Ghare Amar School with the help of online platforms, national radio and community radio.

However, only 14 million primary students have managed to receive online education as of yet. Also, online classes have been introduced in 15,676 out of 20,499 secondary schools and 700 among 4,238 colleges.

42 out of 49 public universities and 92 among more than 100 private ones are conducting online classes, according to the finance minister.

A World Bank survey shows that less than 50 per cent of students in Bangladesh have access to radio, television or any digital platform.

The Education Watch Report 2020-21, published by Campaign for Popular Education found that 58 per cent of students surveyed were not technologically equipped with electronic devices or smartphones to access distance learning services. This clearly shows that nearly half of the students cannot afford online education at this moment.

The second challenge that should be addressed in the budget was to allocate a sufficient fund to the youth and sports ministry to create skilled youths for the job market. Dropout rates among secondary-level students stand at 45 per cent, according to a survey conducted by the South Asian Network on Economic Modeling.

The rate was 36 per cent before the pandemic.

However, the youth and sports ministry budget are reduced by 24.36 to Tk1, 115 crores. Among the sum, Tk 897 crore is operational cost and Tk 230 crore is development budget. The budget does not reflect the demands of the youths who have been dropped out from educational institutes due to the pandemic.

Formulating a concrete plan for the dropout students with an adequate budget could train them in different skills and they can contribute heavily to the economy with their skills. This segment of the youth is completely overlooked in a budget of over Tk 6 trillion.

Bangladesh Awami League is serving their third consecutive term in the office and they have been vocal about their emphasis on youth development. However, numbers tend to differ their claim and prove that their youth-friendly narrative is hollow political rhetoric.

The lowest educational budget in south Asia, which is less than half compared to neighbouring countries and a reduced budget for youth development shows that they have little regard for the students and the youth.

A manifold increased budget to compensate the lost time of the students and a solid plan was of utmost importance. Creating an online education-friendly inclusive infrastructure and skill development training for school dropout could help the country and the economy in the long run.