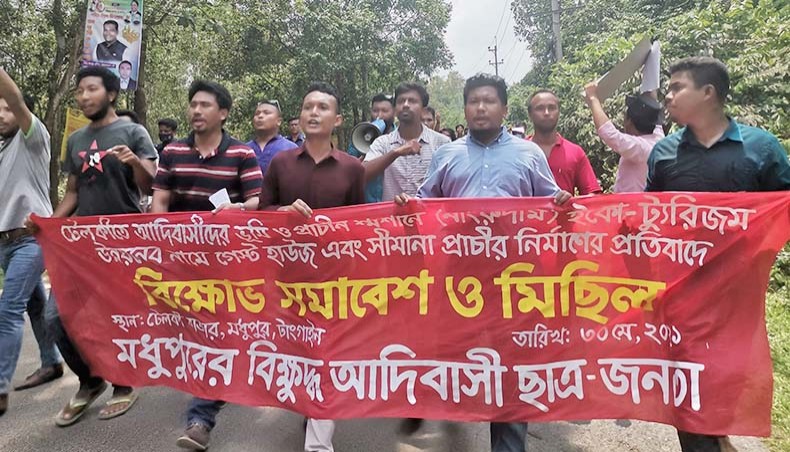 During different governments’ period, the local ethnic minority people in Madhupur were evicted from their ancestral land and the forests were destroyed in the name of the national park, eco-park, eco-tourism, firing range and conservation forest. The ethnic people want to live with forests and hills. If there are no forests and hills, the ethnic community people will not exist, writes Jadil Mree

Madhupur tract is called ‘Aa’Bima’ by the Garo people. The Bengali meaning of it is the mother of the land or the fertile land. In 1860, a treaty was made between king Jagadindra Nath Roy Bahadur and the village chiefs of the Garo community; from then on people started to pay tax to the king continued till 1982. The forest department was established in 1972. So even before the British rule, there were Garo, Koch, and Bamarna people living in the Madhupur tract which is witnessed by the establishment of schools and various institutions during the British rule.

The lives of ethnic minority people are deeply involved with nature. Why do these communities like to live here amidst forests, mountains and fountains? Why do these people want to live with the forest, mountain, stone, medicinal plant, flower and fruits? It is because only the people who are deeply involved with nature know the consequences of disrupting the laws of nature. If the laws of nature are not obeyed, then all living beings will suffer from the consequences.

So, as animals and human beings need forests for their existence, in the same way, forests are needed for the purity of nature. During my childhood, I read in my textbook that a country must have 25 per cent forest but it is needless to say what percentage of our country now has forest lands. Chakma circle raja Debashish Roy once said, ‘When there was a forest, there was no forest department. The deforestation started as soon as the forest department was created.’

Seeing the reality, I cannot but agree with the words of Debashish Roy. The forest that I saw in my childhood in Madhupur is no more. Those who are in charge of forest protection, I do not know how much they understand the forest, but they understand how to destroy the forest. Forest department officials can avoid the responsibility of deforestation, looting of forest resources, destroying the habitat of animals, and the consequences of the ecological cycle changes.

Many of you are aware of the ongoing issues in Madhupur. These issues exist even before the country became independent. The local ethnic minority communities are trying to protect the existing forest by staging continuous movements. But, how long the move will continue? Is it possible to protect the forest if the state does not have the will to protect it?

During different governments’ period, the local ethnic minority people were evicted from their ancestral lands in the name of the national park, eco-park, eco-tourism, firing range and conservation forest. Though they were evicted but have not received any compensation even today. The fear of eviction is still going on as well as the movement for protecting the forests. On May 30, a demonstration and a protest rally were held under the banner of students and people at the Telki Bazar where 4-point demand was pressed.

Why the local community and the people of the country will suffer due to the misdeeds of the forest department? I do not know if there will be a fair solution to their misdeeds! When will the state realise that there is no development if the forest is destroyed and a rest house is built? Is it better to have an air conditioner’s cold air instead of natural pure air? The forests would be saved if the forest department worked to protect these forests as the local ethnic communities are trying their best to protect nature.

The movements in Madhupur are still going on. Moreover, the project of building walls and other facilities are also going on over the ancient burial ground (Mangrudam) of the followers of Sansarek Dharma.

With the help of social media, people can know the sufferings of the country’s ethnic minority communities. The movement is going on in Madhupur, where the light of fair solution is not yet seen.

In addition to that, miscreants recently chopped down more than one thousand betel leaf trees from the jhum land in Moulvibazar. On the betel leaf trees, 48 families were dependent and those were the only earning source of them but now how will they survive?