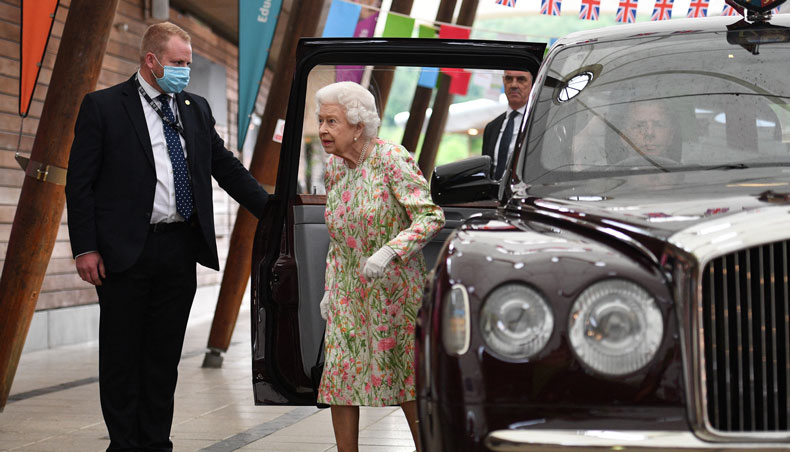 Britain’s Queen Elizabeth II arrives to attend an event in celebration of ‘The Big Lunch’ initiative at The Eden Project in south west England on June 11, 2021. — AFP photo

Sarah Gilbert, lead developer of the Oxford/AstraZeneca vaccine, and Kate Bingham, the former chair of Britain’s vaccine taskforce, are both to receive damehoods – one of the highest honours bestowed by the monarch.

Bingham said she was ‘humbled’ to be recognised, paying tribute to National Health Service workers who have ‘risked their health and their lives in fighting Covid.

‘The development of vaccines has been a triumph of scientific and industrial collaboration,’ she added. ‘Just a year ago we were assembling an unproven portfolio of vaccines for the UK.

‘Yet in the last six months nearly 70 million vaccine doses have provided unprecedented protection and saved thousands of lives.’

Gilbert paid tribute to her ‘talented and dedicated’ team of colleagues, ‘who made it possible to develop a vaccine in less time than anyone thought possible’.

Gilbert’s Oxford colleagues Andrew Pollard and Peter Horby will both receive the equivalent knighthoods, allowing them to be called ‘sir’, in a list dominated by those involved in the pandemic response.

Brother and sister team John Brownhill and Amanda Guest will be honoured with a British Empire Medal after setting up a service that delivered more than 200,000 meals to the state-run NHS during the health crisis.

Almost a quarter or 262 people on the main honours list, which rewards individuals’ bravery, service or achievement in their field, have been recommended for coronavirus-related activities.

Elsewhere, England footballer Raheem Sterling will receive an MBE for services to racial equality in sport while actor Jonathan Pryce, who was last year nominated for an Oscar for his role in ‘The Two Popes’, will be knighted.

‘After almost 50 years as an actor I am proud to think that the work and ideals that I have shared with my friends and colleagues is being honoured in this way,’ said Pryce.

Wakeman, 72, said he was ‘stunned and genuinely very proud’ by the award. ‘I have always been very patriotic,’ he said.

‘I am a devout royalist, a patriot as they say. I feel very proud, and always have been, to be British. I feel proud to be in the profession I am in.’

Liverpool football captain Jordan Henderson will receive an MBE after helping to raise £4 million for the NHS from fellow Premier League players.

Former England football team manager Roy Hodgson will be awarded a CBE for his service to sport.