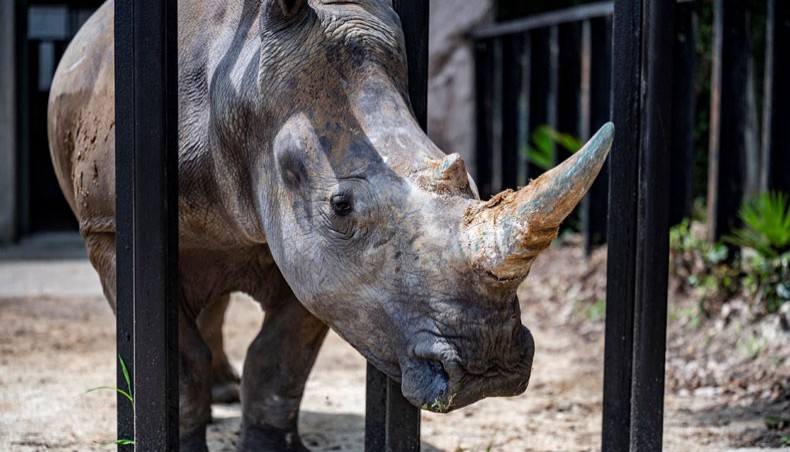 Japanese zookeepers are praying that a newly arrived white rhino will hit it off with her blind date when they meet later this year as ‘Emma’ settles in to her new home near Tokyo.

The horned herbivore, hand-picked by Taiwan's Leofoo Safari Park to start a family abroad, arrived in Japan this week, months later than planned due to pandemic complications.

Yasushiro Shimo, zoo division manager at Tobu Zoo in Saitama outside Tokyo, said the mild-mannered five-year-old would be introduced to her first suitor in September -- but a love match is far from guaranteed.

‘The male is 10 years old, and is big. We will put them together and let them get acquainted. We think breeding will take a year,’ he told AFP.

‘Of course, if they are not compatible, they won't breed. All we can do is pray.’

On Friday, Emma could be seen relaxing after her travels, eating, napping and wandering around her paddock.

She was picked from a herd of 23 rhinos because of her even temper and small size, which made her easier to ship overseas.

When her departure was delayed from March by the virus, keepers started teaching her Japanese words such as ‘come’ and ‘no’ to get her ready for the trip.

‘Emma is very used to people. In Taiwan, the keepers put mud on her body and cared for her in other ways like that, so she's familiar with humans. In general, she's quite calm,’ Shimo said.

She is likely to double in size from her current slender 800 kilograms, he added. ‘She's still young. I think she will grow to two tonnes.’

Zoo breeding programmes have played a key role in repopulating herds of southern white rhinos, which are not in fact white.

The species currently numbers around 19,000, found in the wild across southern Africa, according to the conservation group Save the Rhino.

Their northern cousins have not been so lucky, however. Only two northern white rhinos remain, both female, rendering the species functionally extinct.

Rhino poaching is fuelled by a market for their horns in Asia -- especially China and Vietnam.

The horns are made of nothing more than keratin, the same material as fingernails and hair. But scammers erroneously market horns as an aphrodisiac or cancer cure.