23 die as bus overturns in Pakistan 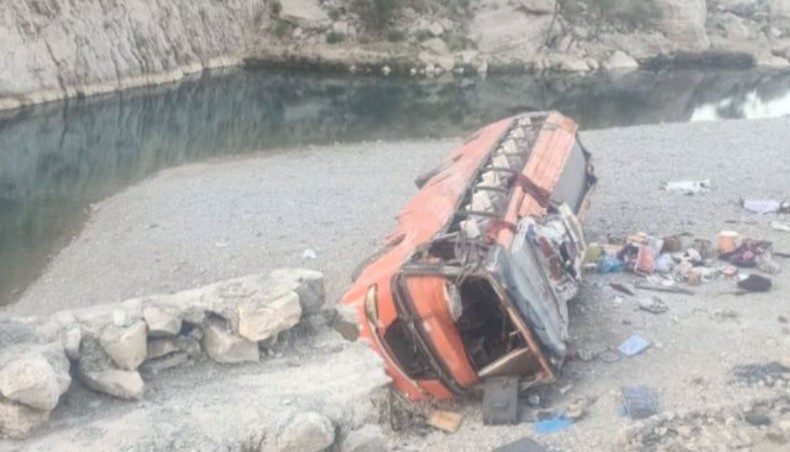 At least 23 people are killed when a bus carrying pilgrims in Pakistan overturned and fall into a ravine in Khuzdar district of the country. — DawnNewsTV

At least 23 people were killed and several others sustained injures when a bus overturned on the M8 motorway in Khuzdar district in Pakistan and fell into a ravine early Friday, reports the Dawn.

The deputy commissioner told Dawn.com that the bus was carrying pilgrims from Wadh in Balochistan to Dadu in Sindh.

He added that 15 of the victims died on the spot, while three others died from injuries during treatment at a hospital.

Levies personnel and rescue workers shifted the bodies and the injured to the hospital.

The DC said two brothers and four others of a family were among the deceased, adding that the bodies had been sent to the victims’ hometowns via ambulances after the completion of medico-legal formalities.

According to DC Ahmed, the pilgrims were residents of Dadu who were returning home after attending the annual urs at Sufi saint Abdul Qadir Naqshbandi’s shrine in Wadh.

He said the bus driver lost control of the vehicle while making a sharp turn, adding that the bus was overcrowded and several pilgrims were sitting on its roof.

Ahmed said the bus driver was among the injured and some of them were in critical condition.

‘There is not a single passenger who does not have an injury because of the bus accident,’ Ahmed told the AP by phone.

Separately, Imam Bakhsh, one of the injured passengers, told AP by phone that the passengers had repeatedly warned the driver to drive more carefully. He blamed the driver for the accident, saying that he was enjoying music and driving recklessly.

However, Levies official Imran Ahmad said that while the driver’s negligence was the apparent cause of the accident, officials were still investigating the matter.

The accident has come as the grim reminder of a similar incident in 2020, in which five of a family were killed and 24 others were injured as a bus carrying pilgrims overturned near Shah Noorani crossing in Lasbela district, Balochistan.

The bus, carrying over 30 pilgrims, was going to the shrine of Hazrat Bilawal Shah Noorani in the Wadh area of Khuzdar district from Karachi. It had also overturned at a sharp turn in the hilly area near Shah Noorani crossing.

The bus overturning had left five people dead on the spot.