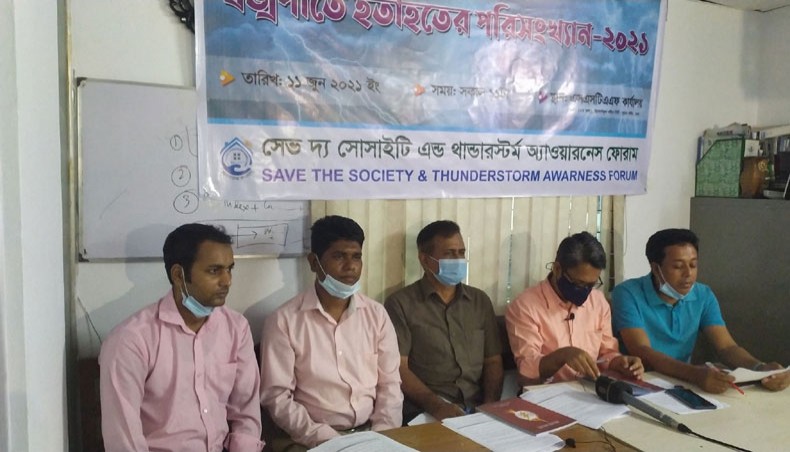 Speakers attend a Save the Society and Thunderstorm Awareness Forum press conference in Dhaka on Friday. — New Age Photo

At least 177 people including 13 children were killed by lightning strikes across the country in the past four months between March and June, said a report unveiled on Friday.

Safe the Society and Thunderstorm Awareness Forum unveiled the report in a press conference held in the city.

Among the dead, 18 died in Sirajganj, 14 Jamalpur, 13 Netrakona, 16 Chapainawabganj and 10 in Chattogram, said that report.

Among the dead 149 were male and 28 female victims. Another 47 people were injured.

Thunderstorm Awareness Forum demanded that the government should make people aware through mobile messaging 15 minutes before lightning starts to strike as part of steps to reduce deaths.

In the six-point demand, the organisation also wanted duty exemption on devices used for protection against lightning strikes.

Jahangirnagar University zoology professor and president of the forum Kabirul Bashar presided over the press conference where Rashim Mollah, general secretary of the forum, its research team head Abdul Alim and Nure Alim were present, among others.