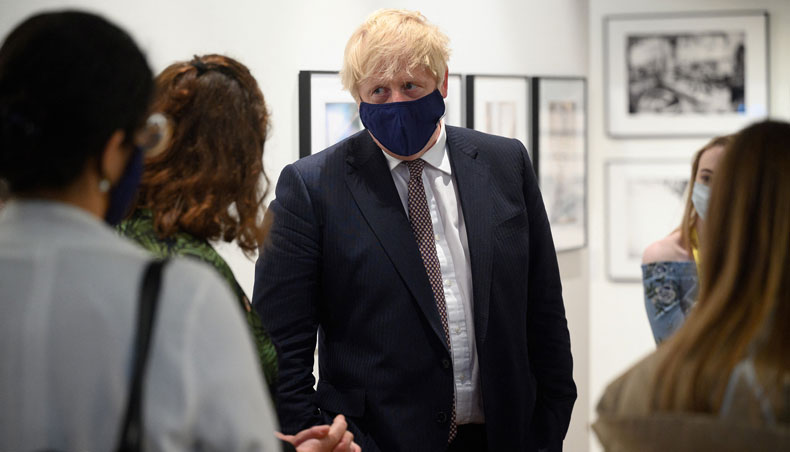 Britain’s prime minister Boris Johnson discusses the foreign aid cap with a member of an engagement group during a visit to Falmouth’s Maritime Museum, where he met and thanked volunteers hosting the media centre for the G7 Summit, in Falmouth, Cornwall on June 10, 2021, ahead of the three-day G7 summit being held from 11-13 June. — AFP photo

G7 leaders meet this weekend for the first time in nearly two years, after the global coronavirus pandemic forced last year’s event to be cancelled.

But the health crisis is still presenting hosts the UK with a major challenge, to prevent the virus spreading among participants.

The leaders of Canada, France, Germany, Italy, Japan, the UK and the United States will notably discuss post-pandemic reconstruction at the three-day talks in Carbis Bay, Cornwall.

Fair distribution of anti-Covid vaccines and climate change will also be on the agenda at the picturesque seaside resort in southwest England.

All leaders have been at least partially vaccinated against Covid-19.

They will be joined by their counterparts from the European Union, and invited guests from Australia, India, South Korea and South Africa.

Most will attend in person, although India’s prime minister Narendra Modi will take part virtually because of the rapid spread of a new variant of the virus back home.

Normally, G7 summits are attended by thousands of journalists but the number of accreditations this year has been drastically reduced because of social distancing requirements.

And most of those who have managed to secure a pass will be kept at a distance, at a media centre in Falmouth, some 36 kilometres by road from Carbis Bay.

Although the UK has rolled out a successful mass vaccination programme, there is lingering concern about outbreaks of the Delta variant first identified in India, and fears about it spreading.

Summit participants, including country delegation members and journalists, have to undergo regular screening using rapid tests two days before the start of the event.

They then have to be tested twice the following week.

Proof of negative results is required for access to the media centre and other areas.

Anyone who tests positive for coronavirus will have to self-isolate and a dedicated tracking system has been put in place.

UK coronavirus restrictions also apply: masks must be worn in enclosed areas, social distance of two metres must be maintained, hands must be washed frequently, and indoor interactions must be limited to six people or two households.

But the heads of state and government will not be masked for the family photo, which will be held outside. UK prime minister Boris Johnson will not shake hands – something he insisted on doing in the early stages of the pandemic.

Four sites — Plymouth, Falmouth, Truro and Exeter — have been set up by the police to host protests planned during the summit, which will be under very high security surveillance.

But several groups have already indicated that they will boycott the official areas, with the aim of disrupting the meeting in Carbis Bay as much as possible.

Some 6,500 police officers in total will be mobilised – 5,000 reinforcements in addition to the local Devon and Cornwall Police, which has called the event ‘the largest police and security operation in its history’.

Hundreds of armed service personnel, including explosive ordnance disposal teams, naval vessels and aircraft, will also be on hand.

About 1,000 officers will be housed on a ship moored in Falmouth, the MS Silja Europa, which usually sails the Baltic Sea.

On its website, its owner, the Estonian company Tallink, describes it as the ‘biggest and most beautiful cruise ship on the Baltic’.

But it will not be possible to enjoy the spa and bars on board: anti-Covid rules will be in place.