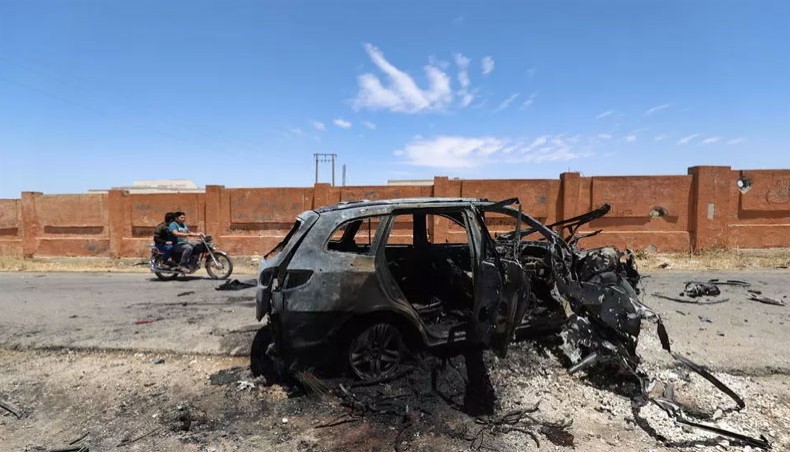 Syrians on a motorbike drive past the carcass of a charred car, hit in reported bombardment by government forces on the village of Iblin in the Jabal al-Zawiya region in Syria's rebel-held northwestern Idlib province on June 10, 2021. -- AFP photo

Syrian regime shelling on the opposition-held Idlib enclave killed 10 people Thursday, one of the deadliest violations of a 15-month-old ceasefire, a war monitor said.

An AFP correspondent in the area saw the remains of a house destroyed by the rocket fire as well as a charred vehicle parked outside.

The bodies of several victims were lined on the floor and covered with blankets.

The incident started with rocket fire near the village of Iblin, which lies around 25 kilometres southwest of the city of Idlib. The Syrian Observatory for Human Rights said three civilians, including a man, a woman and her child, were killed in the shelling, which occurred near the line separating regime forces from the opposition-held enclave.

A second attack killed seven people who had gathered at the site of the first, said the monitor.

They were all members or affiliates of the Hayat Tahrir al-Sham alliance, a jihadist organisation that includes ex-members of Syria’s former al-Qaeda franchise, the Observatory said.

The attack was one of the deadliest since a March 2020 ceasefire, which was brokered by the conflict’s main Russian and Turkish brokers and has largely held since.

An HTS spokesman and an HTS media coordinator were among the seven killed, added the Observatory. In a statement sent to local journalists over Whatsapp, HTS confirmed that three of its members were among those killed.

Standing in front of a house levelled by rocket fire, Ibrahim Harmoush said many people had gathered on the street following the first attack, which led to rising casualties when the second followed

‘We woke up in the morning to the sound of shelling and artillery fire,’ said the 30-year-old area resident.

HTS and its allies control around half of Idlib province as well as slivers of territory in the neighbouring provinces of Aleppo, Hama and Latakia.

More than three million people live in the region, half of whom have been displaced from other parts of the country.

Since the ceasefire deal, the Russian-backed regime has stopped short of launching a fully-fledged land offensive to deliver on its promise to reconquer the entire country.

But violations of the ceasefire are relatively frequent as government forces try to maintain their stranglehold on the enclave.

This past week, Russian warplanes have pounded the southern Idlib region in tandem with artillery shelling by regime forces, according to the monitor.

The war in Syria has killed nearly 5,00,000 people since it started in 2011 with the brutal repression of peaceful demonstrations.