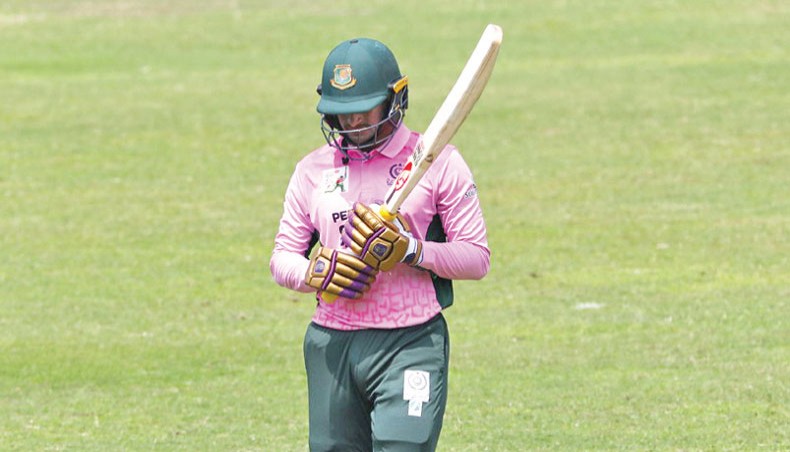 Mohammedan captain Shakib Al Hasan returns to the pavilion after being dismissed for a duck during their DPL match against Legends of Rupganj at the SBNS on Thursday. — BCB photo

Mohammedan Sporting club lost its third match in a row in the Dhaka Premier League, suffering a nine-wicket defeat against Legends of Rupganj at the Sher-e-Bangla National Stadium on Thursday.

This defeat came a day before their seventh round match against arch rivals Abahani Limited, who were victorious on Thursday, beating Shinepukur Cricket Club by 25 runs in Duckworth and Lewis method in BKSP, Savar.

Mohammedan, led by Shakib Al Hasan, made a good start to their season by winning the first three matches but slipped after they lost to Sheikh Jamal Dhanmondi Club which was followed by two more defeats.

At Mirpur, Mohammedan amassed a paltry total of 113-9 after opting to bat first.

Shakib’s bad patch continued in the match as he was out for a duck, his second duck in six premier league games and third out of the last ten matches.

Shuvagato Hom then made 52 off 32 balls to push Mohammedan’s total over 100.

Meanwhile at BKSP, Abahani piled up 183-5 in 20 overs after being sent to bat.

Abahani openers Mohammad Naim (70 off 50 balls) and Afif Hossain (54 off 42 balls) formed a 111-run stand, the first century opening partnership and the highest stand for any wicket in the ongoing league.

Shinepukur’s reply was interrupted by rain and after the forced break they were given a revised target of 149 runs from 17 overs.

But three wickets from Mohammad Saifuddin restricted them for 123-5 to give Abahani its fifth win and ascend to the top of the table.