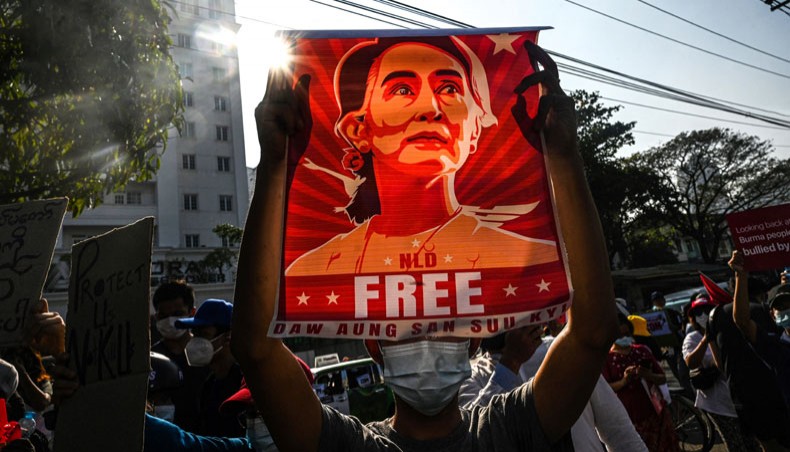 In this file photo taken on February 15, 2021, a protester holds up a poster featuring Aung San Suu Kyi during a demonstration against the military coup in front of the Central Bank of Myanmar in Yangon. Myanmar’s deposed leader Aung San Suu Kyi has been hit with fresh corruption charges, state-run media reported on June 10, 2021. – AFP photo

The Myanmar junta has hit deposed civilian leader Aung San Suu Kyi with corruption charges over claims she accepted illegal payments of gold and more than half a million dollars in cash, state media reported Thursday.

The country has been in turmoil since the generals ousted Suu Kyi on February 1, with more than 850 civilians killed in a brutal crackdown by security forces on near-daily protests against the coup.

The 75-year-old Nobel laureate, who has been in custody since the putsch, is facing a raft of wide-ranging criminal charges, including sedition and breaching a colonial-era secrecy law.

The latest charges relate to allegations by the former Yangon region chief minister that Suu Kyi illegally accepted $600,000 in cash from him along with around 11 kilograms of gold.

The Anti-Corruption Commission found evidence that Suu Kyi had committed ‘corruption using her rank’, according to the Global New Light of Myanmar, a state-run newspaper.

‘So she was charged under Anti-Corruption Law section 55.’

She is also accused of abusing her authority when renting two areas of land for her charitable foundation.

After weeks of legal wrangling, two of Suu Kyi's trials are due to start in earnest next week, hearing evidence from witnesses.

In Naypyidaw, the remote capital purpose-built by the previous military regime, her trial on charges of violating restrictions during last year's election campaign and possessing unlicensed walkie-talkies will start on Monday.

A separate case is scheduled to start on June 15, where she is charged with sedition alongside ousted president Win Myint and another senior member of her National League for Democracy (NLD) party.

‘There is an undeniable political background to keep her out of the scene of the country and to smear her prestige,’ he told AFP, saying she could face long prison terms on the secrecy and corruption charges.

‘That's one of the reasons to charge her -- to keep her out of the scene.’

Suu Kyi spent more than 15 years under house arrest during the previous military rule before her 2010 release.

The junta has previously said it would hold fresh elections within two years but has also threatened to dissolve the NLD.

‘That election -- I cannot say if it will materialise or not, and maybe NLD will not be able to compete,’ Khin Maung Zaw told AFP.

‘But for Aung San Suu Kyi, if she is convicted under these charges she will not be allowed to compete.’

Richard Horsey, senior advisor on Myanmar to the International Crisis Group, told AFP that smearing opponents with corruption was a longstanding tactic of the military.

‘Their ludicrous charges of illegal walkie-talkie use and Covid violations will allow them to lock Aung San Suu Kyi away, but corruption charges are a way to try and besmirch her reputation,’ he said.

Elsewhere in Myanmar on Thursday, twelve people were killed when a military plane carrying a senior monk and several donors to a religious event crashed in a central region of the country.

Two others on board -- a boy and a sergeant from the plane's crew -- survived the crash and were taken to a military hospital, a junta spokesperson said.