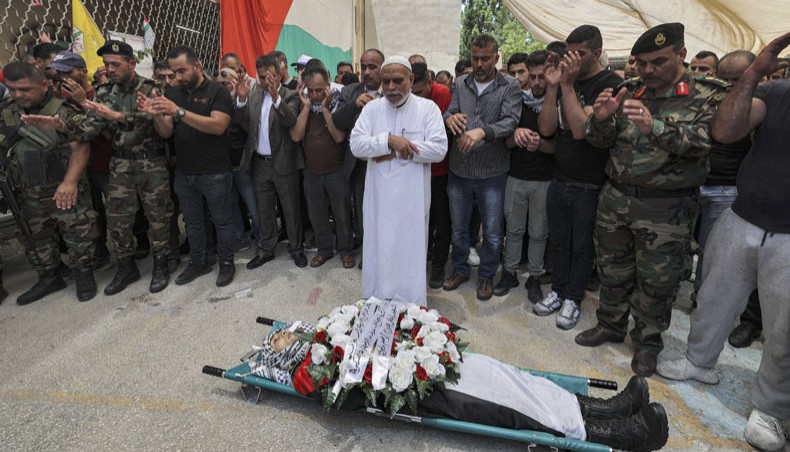 Mourners pray by the body of Adham Eleiwi, a Palestinian military intelligence agent who was killed in a confrontation with Israeli special forces, during his funeral in the village of Zawata, west of Nablus in the occupied West Bank on June 10, 2021. Three Palestinians were killed early on June 10 by special Israeli forces who were on an arrest mission in the northern West Bank, sources on both sides said. One of the Palestinians killed was suspected of having carried out a shooting attack against Israeli soldiers, an Israeli security official said. The other two were members of the Palestinian Authority security forces who witnessed the initial exchange of fire. ---  AFP photo

Three Palestinians, including two Palestinian military intelligence officers, were killed early Thursday by Israeli special forces who were on a mission to arrest suspected ‘terrorists’ in the occupied West Bank, sources on both sides said.

An Israeli security official told AFP that special forces were in the West Bank city of Jenin seeking ‘to arrest terrorists’ who had carried out shootings attacks against soldiers in recent months.

‘One Palestinian who opened fire on the forces was shot dead,’ he said, with Palestinians security forces identifying him as Jamil al-Amuri, a former prisoner.

Another suspect, Wissam Abu Zeid, was seriously wounded in the exchange.

The Israeli security official told AFP the two were members of the Islamic Jihad militant group.

According to a senior Palestinian security official, the Israeli forces were using a civilian car, which raised the suspicions of two Palestinian officers at a nearby base, who opened fire at the Israelis and were killed in the exchange.

Videos circulating online appear to show a Jenin resident yelling that the people in the car were Israeli undercover officers, while the Palestinian security men fired at it.

No Israeli personnel were wounded in the incident, the Israeli official told AFP.

The Palestinian presidency condemned the Israeli operation, with spokesman Nabil Abu Rudeina calling it a ‘violation of international law’ that would bring a ‘dangerous escalation’.

Abu Rudeina ‘held the Israeli government responsible for this escalation and its repercussions, calling on the international community to provide protection for the Palestinian people,’ in remarks carried by official news agency Wafa.

Factions in Jenin from across the political spectrum called a general strike in the city to mark the deaths of the three men.

Israeli forces frequently carry out arrest raids in the occupied West Bank. On May 25, Israeli forces killed a Palestinian during one such raid near Ramallah.

Violence in the West Bank increased in early May, with at least 30 Palestinians killed in clashes with Israeli forces and in alleged attacks, amid a flare-up in Israeli-annexed east Jerusalem that led to 11 days of fighting in and around Gaza between Israel and the territory's Islamist rulers Hamas.

The May 10-21 military escalation saw Hamas firing rockets into Israel in response to what it considered provocations in Jerusalem against the Palestinian population.

Israeli strikes killed 260 Palestinians, including 66 children and some fighters, and wounded more than 1,900 people, the Gaza health ministry says.

Rockets and other fire from Gaza killed 13 people in Israel, including a child, an Arab-Israeli teenager and an Israeli soldier, medics and the military say. Some 357 people in Israel were wounded.