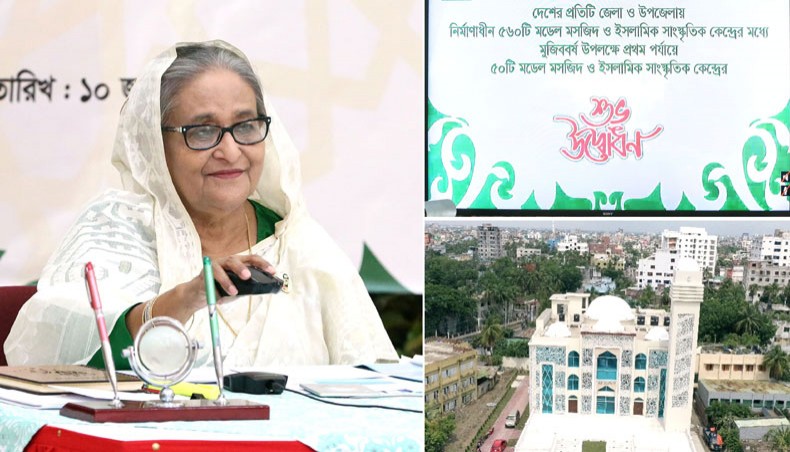 Prime minister Sheikh Hasina on Thursday said that the model mosques would help spread Islamic practice and culture so that people irrespective of religions and castes could realise the core essence of Islam.

She made the remarks while addressing the inaugural function of 50 luminous model mosques constructed across the country fulfilling one of her election pledges.

She opened the mosques virtually from her official  residence Ganabhaban on the occasion of the Mujib Year.

The mosques have been built as part of the government’s move to set up 560 such mosques-cum-centres of excellence at district and upazila levels, aiming to spread Islamic fraternity and real Islamic values and practices, conduct research, create strong infrastructures for prayers for both men and women, provide religious teaching and training and enhance public awareness against social diseases.

The prime minister said that Bangladesh is a Muslim majority country. So, it is essential that Islamic rituals and values will be practiced properly and Islamic culture will be developed in the country, she said.

The most important is that the people can realise the core essence of Islam, she added.

She called upon all to be aware further to keep the society free from child-marriage, dowry, violence against women and drugs.

Hasina urged Islamic clerics, teachers and guardians to make their efforts to keep away the younger generation from the path of militancy, which tarnishes the image of Islam.

Noting that Islam is the best religion in the world, she said that the most unfortunate matter was that a handful number of people gave a bad name to the holy religion creating militancy, killing people and blasting bombs.

She said that Islam is the most tolerant religion which allows all people to enjoy their rights and teaches for treating the people as human beings.

Later, the prime minister heard from devotees virtually from model mosques in Khulna, Rangpur and Sylhet.

On April 5, 2018, Hasina laid the foundation stone for the construction of model mosques and Islamic cultural centres involving Tk 8,722 crore.

The government is implementing the project with its own fund to fulfill the pledge Hasina made in the election manifesto before the 2014 national elections to build a model mosque in every district and upazila in the country.

One-hundred more model mosques will be opened in the second and third phases by 2021, marking the birth centenary of the country’s founding president Sheikh Mujibur Rahman, according to officials of the project.

Each model mosque is being constructed on a 40-decimal plot under three categories.

A district model mosque has enough space for some 1,200 devotees to simultaneously offer prayers. The upazila-level mosques can accommodate 900 devotees at a time.

In a model mosque-cum-Islamic cultural centre, there are separate prayer halls and ablution places for men and women.

The centres have Islamic libraries, Islamic book sale corners, training centres and pre-registration for hajj aspirants and Imams, Hifzkhana (where the Quran is taught and memorised by students) and the offices of Islamic Foundation.

Another significant addition to the mosques is autism corners and guest rooms for tourists. They also have arrangements for Islamic research and religious activities and funeral activities. Besides, facilities are there for educating children and the mass people, said officials.