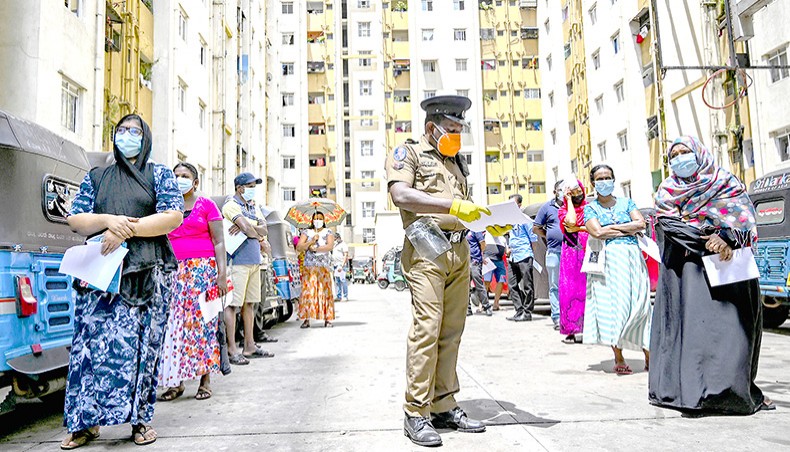 People stand in a queue as they wait to get a dose of the Chinese-made Sinopharm Covid-19 coronavirus vaccine in Colombo on June 1, 2021. — Agence France-Presse/Ishara S Kodikara

THE US government has decided to include Sri Lanka as one of the countries to which it will donate the excess stock of Covid vaccines it has purchased. The US announced its framework for sharing at least 80 million vaccine doses globally by the end of June and the plan for the first 25 million doses which will include seven million to specified Asian countries, including Sri Lanka. This is a welcome action that will have a tangible impact on the lives of millions of people in the beneficiary countries. The explosion in the numbers of Covid victims, particularly in poorer countries that have less access to vaccines, has driven up the demand which outstrips supply and to an increase in prices. Sri Lanka which originally was paying only $5.50 for a single dose is now paying $15 which it can ill afford.

The beneficial action of the US government led by president Joe Biden is an indication of the complex nature of democratic countries. The Biden administration’s decision to give Sri Lanka the benefit of free Covid vaccines comes at a time when the US has been open about its dissatisfaction with the direction of the Sri Lankan government in terms of both its internal policies especially those relating to national reconciliation, and also foreign policy in relation to China. This has led to verbal sparring between Sri Lankan leaders and US government representatives on issues such as the human rights resolution on Sri Lanka at the UN Human Rights Council in Geneva, the scuttling of the MCC grant of approximately $500 million and Sri Lanka’s growing geopolitical linkage with China.

The US government’s decision to include Sri Lanka in its Covid vaccination package may be considered as an opportunity for Sri Lanka to step forward with appreciation and accept the goodwill of the United States and transcend the recent past. The value of the US system of government, as indeed any democratic system, is that there is no one source of power in them as is the case of one party states. There are multiple sources of power in democratic countries. If the relationship with one power centre is not positive, it may be possible to approach another power centre. In the US, there is not only the presidency, there is also the Congress, the judiciary, the civil society including human rights organisations, and there is the media. Each of them is powerful and can act as counter balances and an appeal can be made to them in case of injustice.

President Biden’s administration has currently reached out to Sri Lanka and to its people in our time of need, with around half a million people vulnerable to the Covid infection due to their inability to get the second dose of Astrazaneca vaccine. It is unfortunate, however, that also at this time Sri Lanka is gearing up for an angry exchange of words at the very least with the US on the issue of Sri Lanka’s national reconciliation process. This is on account of a resolution that has been presented to the US Congress by some of its representatives that calls for a political solution to Sri Lanka’s ethnic conflict. Unless wiser counsel prevails, government leaders will soon be seeking to demonstrate their patriotism by denouncing the US for its interference in our internal affairs and depicting worst case scenarios to mobilise popular opinion behind them.

SOME analysts may look upon the move of a bipartisan group of US legislators to take up the issue of Sri Lanka’s post-war reconciliation process in Congress as due to unhappiness with Sri Lanka’s growing geopolitical links with China. Other analysts see the power of diaspora lobbying and bringing to the consciousness of the US government that it too bears a measure of responsibility as one of the four co-chairs of the Norwegian-led peace process, which unfortunately did not go through. The resolution ‘acknowledges the 12th anniversary of the end of the war in Sri Lanka and offers its deepest condolences to all those affected by the conflict.’ It then goes on to ‘urge the international community to advocate for and protect the political rights and representation of the historically oppressed north-eastern region of Sri Lanka and work towards a permanent political solution to address the underlying issues that led to ethnic conflict.’

There are many assertions in the resolution that the government will find unacceptable. The resolution has background information that ‘the north-eastern region of the country, the traditional Tamil homeland, remains heavily militarised with up to one soldier for every two civilians in the most war affected regions’ which can be contested. While the assertion about the military presence might be true if an army camp is next to a village, it will not be true of the northern and eastern provinces taken as a whole, whose combined population is about three million. Another contestable feature will be the description of the northern and eastern provinces as being the traditional Tamil homeland. The Indo-Lanka Peace Accord of 1987 which was signed by both the governments of India and Sri Lanka stated ‘that the Northern and the Eastern Provinces have been areas of historical habitation of Sri Lankan Tamil speaking peoples, who have at all times hitherto lived together in this territory with other ethnic groups.’

The Indo-Lanka agreement which led to the 13th amendment, to the provincial council system and to the temporary merger of the northern and eastern provinces, which was subsequently undone by judicial decision, was one that was developed for peace in a situation of war. From a Sri Lankan perspective, giving special status to any part of the country to any particular community would be unacceptable as Sri Lanka is the country of all Sri Lankans regardless of ethnicity or religion. It is a pointer to the need for the government leadership to desist from describing Sri Lanka as a Sinhala Buddhist country with the implication that the ethnic and religious majority has a special place in it. The use by anyone of the concept of ownership and primacy will invariably lead to its counter with similar racist imagery and eloquence.

The appropriate stance for the Sri Lankan government to take would be to repeat the words of foreign minister Dinesh Gunawardena when he addressed the UN Human Rights Council in January 2021. The minister stated that ‘No one has the well-being of the multi-ethnic, multi-lingual, multi-religious and multicultural people of Sri Lanka, closer to their heart, than the government of Sri Lanka. It is this motivation that guides our commitment and resolve to move towards comprehensive reconciliation and an era of stable peace and prosperity for our people.’

ON THE other hand, there are sections of the resolution in the US Congress that need to be taken seriously not to satisfy the US but also for the sake of the people of Sri Lanka. The resolution states that ‘arbitrary arrests and threats by the state, and impunity prevails in the country with the outdated and the excessively harsh Prevention of Terrorism Act, which does not comply with international standards and has still not been repealed despite repeated promises by the government.’ One of the promises made by the previous government was to replace the Prevention of Terrorism Act with a national security law that is more in conformity with international standards. Even if this draconian law was justified during the war, it is now 12 years since the end of the war and there is no need for it to remain in force and to tie the hands of the judiciary.

On May 18, Tamil people in the north and east prepared to commemorate the loss of their loved ones in the final battles at the end of the war. However, the government has regularly the position that these commemorations to mark loss of life at the end of the war are really to valorise the LTTE and to pave the way for their return. Accordingly public commemorations were prohibited or restricted on May 18 for reasons of public safety and Covid related health regulations. On the other hand, the position of the Tamil people and their political and religious representatives has been that large numbers of Tamil civilians died in the last stages of the war and they need to publicly remember their loved ones.

In Batticaloa, as reported in the Tamil language media and told to me by a lawyer who was present at the case, a group of about ten members of a family who had lost their loved ones in the war met privately on the sea beach and held a memorial ceremony at which only they were present. One of them posted this event on social media. Shortly thereafter they were all arrested under the Prevention of Terrorism Act and have been in remand custody for over two weeks with the magistrate before whom the case was heard unable to release them on bail as it is under the Prevention of Terrorism Act. One of them is a mother of a two year old child. The inequity of the punishment is compounded by the fact that there were commemorations held in other parts of the country without similar harsh action taken against those who engaged in those commemorations.

The government may feel the need to ensure that its orders are followed and those who violate them are punished. At the same time it should not create a system where even the courts of law, which are part of the Sri Lankan state, cannot demonstrate mercy because a harsh law ties their hands. These words of Shakespeare have a special meaning for Sri Lanka in the context of the Biden administration’s decision to grant Sri Lanka a share of its Covid vaccines, and the resolution before the US Congress: ‘The quality of mercy is not strained. It droppeth as the gentle rain from heaven Upon the place beneath. It is twice blest: It blesseth him that gives and him that takes. ‘Tis mightiest in the mightiest; it becomes The thronèd monarch better than his crown.’