Investors to be allowed to trade T-bonds thru brokerage houses 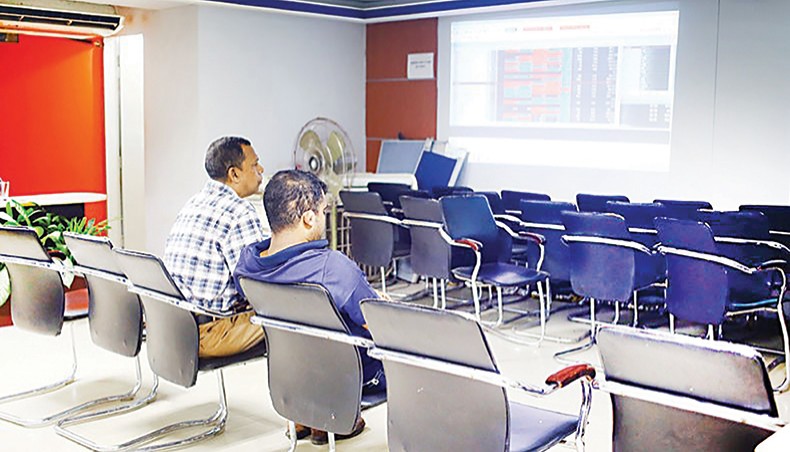 A file photo shows investors monitoring share price movement on a computer screen at a brokerage house in the capital Dhaka. The Bangladesh Bank and the Bangladesh Securities and Exchange Commission have decided to allow stock market investors to trade government’s treasury bonds through their beneficiary owners’ accounts opened with brokerage houses. — New Age photo

The Bangladesh Bank and the Bangladesh Securities and Exchange Commission have decided to allow stock market investors to trade government’s treasury bonds through their beneficiary owners’ accounts opened with brokerage houses.

A senior BB official told New Age that the central bank had almost completed its process to make the bond tradable on the Dhaka Stock Exchange.

He also said that investors would be allowed to trade treasury bonds through both current Market Infrastructure (MI) Module of the Bangladesh Bank as well as the DSE platform as both models would be kept open.

Only a couple of months may be taken to start the trading of the government securities as the DSE is working to upgrade its software, he said.

Now, there are 221 government treasury bonds listed on the DSE.

The BB official, however, said that the central bank might reduce the number considering the nature of the bonds.

BSEC officials said that if the decision was finalised, general investors could buy or sell bonds through their BO accounts with brokerage houses. The bonds in the BO accounts will remain under the Central Depository Bangladesh Limited custody.

However, the central bank will control activities of all treasury bonds.

The BB has its own depository system for the transaction and settlement of government securities in the MI Module. In 2011, the central bank introduced the automated system to expedite the primary auction and secondary market.

Currently, an investor has to open a business partner identification number (BP ID) through any bank in the country and the bank opens a BP ID for the investor through the BB in MI Module. Investors then will select suitable bonds and request his/her bank to buy the available one following depositing fund to his/her bank account.

After that, the bank buys bonds on behalf of its client from the secondary market and the bank collects coupon periodically or matured amount and deposits it to the client’s account.

Stocks investors will not need to open the BP ID as they would be allowed to trade through their BO accounts.

They will buy or sell bonds through their respective brokerage houses. The Bangladesh Bank will collect list of the bonds periodically to send coupon to the investors’ respective bank accounts.

BSEC commission Shaikh Shamsuddin Ahmed told New Age that the finance ministry, the BB and the BSEC had been working to make the treasury bond tradable.

The government wanted to ease the process to make the bond market vibrant, he said.

He also said that it might take less than two months to commence trading of the treasury bonds on the DSE.

T-bonds and T-bills are the major government securities in Bangladesh.

T-bonds are risk-free fixed coupon bearing debt instrument that have two to 20 years of maturity periods.

Primary dealers (PDs) can place bids in auction of the BB for investing in T-bonds. Other commercial banks and non-banking financial institutions, insurance companies, corporate, individuals, provident fund can also participate in auction through the PDs.