BRAC to work for safeguarding its employees from exploitation 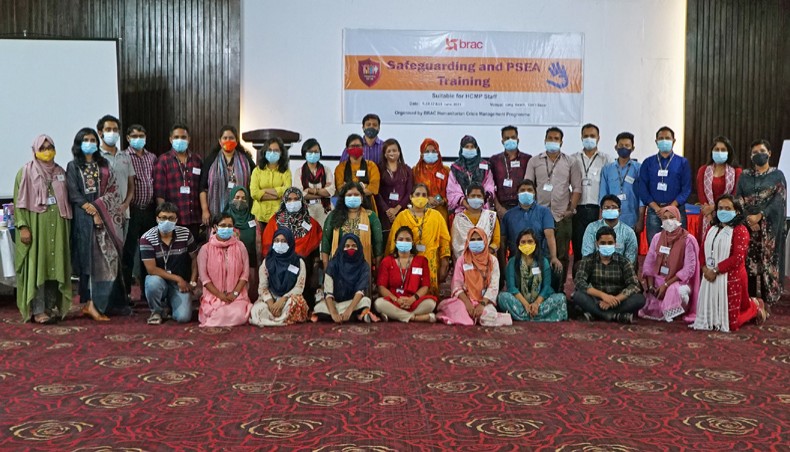 BRAC trainees and trainers pose for a photo in the inaugural session of a training programme on ‘Safeguarding and PSEA Training’ at a hotel in Cox’s Bazar on Wednesday. – Press release photo

BRAC, one of the largest non-governmental organisations in the world, is planning to work for safeguarding and protection from sexual exploitation and abuse issues for its employees.

BRAC will attach due importance to the safeguarding issue for its employees. Advocacy activities aimed at raising awareness more among the employees will be carried out in the future.

Speakers said this while addressing a training programme on ‘Safeguarding and PSEA Training’ at a hotel in Cox’s Bazar on Wednesday, said a press release issued by BRAC.

The Humanitarian Crisis Management Programme of BRAC organized the four-day programme that began on Wednesday.

The training will end on June 13.

Farzana Siddiqua, manager of the human resources division (training and safeguarding) of HCMP of BRAC, moderated the event.

Khondoker Shafiqul Alam and Nitu Barua of the learning and leadership development programme conducted the training session.   Sharmin Akhter and Sutonuka Barua Tupur attended as trainers on behalf of the HCMP of BRAC.

The training was aimed at raising awareness on the issue of ensuring a safe atmosphere for employees, partners, beneficiaries, volunteers, suppliers, Rohingyas and the host community of BRAC by protecting them from abuse and exploitation.

In her speech, Farzana Siddiqua said BRAC was giving importance to the issue of protection, capacity building and skill development of its employees along with the development of marginal people.

Hasina Akhter Huq, area director of HCMP of BRAC, said that safeguarding was not a matter of women now. ‘Rather, it is an essential matter for keeping the work environment safe for both men and women.’