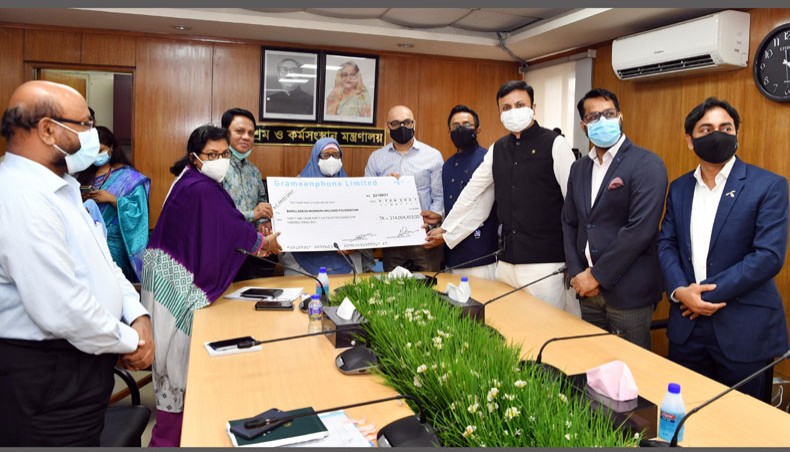 Grameenphone authorities donate around Tk 31.4 crore to the Bangladesh Labour Welfare Foundation Fund under the Ministry of Labour and Employment on Tuesday. — Press Release

Grameenphone has donated around Tk 31.4 crore to the Bangladesh Labour Welfare Foundation Fund under the Ministry of Labour and Employment for the welfare of the workers.

A five-member delegation led by Grameenphone’s chief human resources officer Syed Tanvir Husain handed over the cheque to Monnujan Sufian, state minister for labour and employment, in the conference room of the ministry on Tuesday, said a press release on Wednesday.

‘The government has formed a foundation fund under the Bangladesh Labour Act for the welfare of working people. This fund provides assistance to the workers of the formal and informal sectors in the treatment of accidental deaths in workplaces, injuries, incurable diseases, and also for the higher education of meritorious children of the workers. During this disastrous time of coronavirus, around two thousand workers have been provided assistance worth Tk 6.25 crore from this fund,’ said Monnujan Sufian at the check handover ceremony.

On behalf of Grameenphone, Syed Tanvir Husain said, ‘ We are firmly committed to standing beside the country during these unprecedented trying time of Covid-19, and we will continue to do so. As a nation, our efforts to fight back socio-economic challenges resulted from Covid-19 is exemplary. We believe that our humble contribution to the labour welfare fund will inspire many others to come forward and stand by the workers in need.’

Around 165 local, foreign and multinational companies, including Grameenphone, have been regularly contributing a certain portion of their dividends to this fund. It was revealed at the cheque handover ceremony that the number of companies submitting dividends is increasing every month. At present, the amount deposited in this fund is about Tk 442 crore. It is mentionable that a certain portion of Grameenphone’s dividend is regularly deposited in the Bangladesh Labour Welfare Foundation. As the highest contributor to the fund, Grameenphone has so far deposited Tk 183,00,84,363, said the press release.