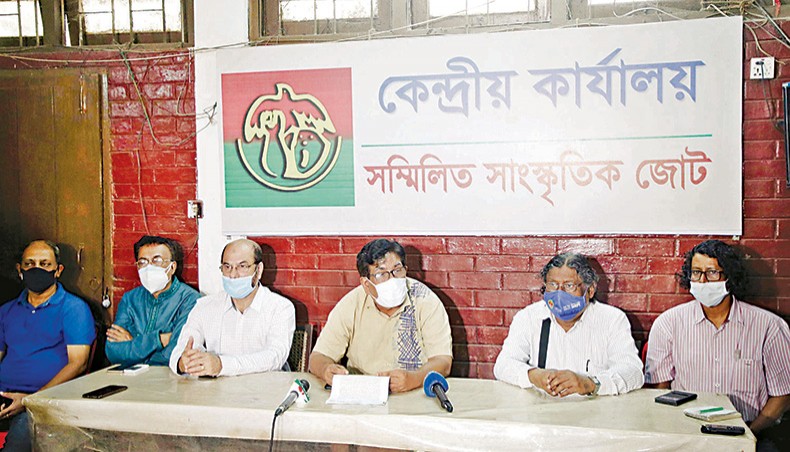 Sammilita Sangskritik Jote arranges a press conference at TSC of Dhaka University demanding an increase in the budgetary allocation for culture in the newly proposed budget for the financial year 2021-22 on Tuesday. — Sony Ramany

Sammilita Sangskritik Jote, an umbrella platform of cultural organisations, demanded raising monthly incentive for destitute artistes to Tk 10,000, which is now at Tk 1,400-3,000, as well as an increase in the budgetary allocation for culture in the newly proposed budget for the financial year 2021-22.

Sammilita Sangskritik Jote president Ghulam Quddus placed a nine-point demand through a written statement at a press conference held at its central office at Teacher-Student Centre of Dhaka University on Tuesday.

The proposed national budget is TK 6,03,681 crore for the financial year 2021-22, in which the budgetary allocation for the cultural affairs ministry was proposed at Tk 587 crore, which is only the 0.0987 per cent of the total budget.

In his written statement, Ghulam Quddus said that the proposed budget once again made it clear that the government largely ignored cultural practices as it has been more than a decade that the demand for raising allocation for culture failed to attract due attention.

‘The government should increase the budgetary allocation for culture and raise it to at least 1 per cent in the newly proposed budget. We are aggrieved, frustrated and astonished after watching the newly proposed budget for culture. If it does not happen, cultural organisations across the country will organise various programmes after the improvement of the coronavirus situation,’ said Ghulam Quddus.

‘We are not organising any programmes as the Covid infection rate in the country is on the rise and there is a government-imposed restrictions on such programmes,’ Ghulam added.

The demands also included construction of art galleries for exhibiting artworks and mini auditoriums for screening short and documentary films in districts across the country.

The statement also demanded that a cultural network should be developed across the country under a special project.

Additionally, the statement also proposed that a writer, artiste or educationist should be appointed as the district Shilpakala Academy president instead of a deputy commissioner.

The statement demanded infrastructures such a Jatra pandal in each district as no Jatra pandals were inaugurated in Bangladesh after 50 years of its independence. It also demanded a modern auditorium for every five lakh people in Dhaka so that the people living in different areas in the capital have the scope for cultural activities.

The government has given incentives to 1,230 cultural organisations for the financial year 2019-2020 and Tk 20,000 to 60,000 were paid to each organisation. The statement urged the government to increase the incentive to at least TK 1 lakh and proposed that the number of the organisations should be increased to five thousand.

Many artistes have lost their livelihoods after the emergence of Covid 19, said the statement and demanded that loan without interest from Tk 2 lakh to 5 lakh should be given to each artiste.