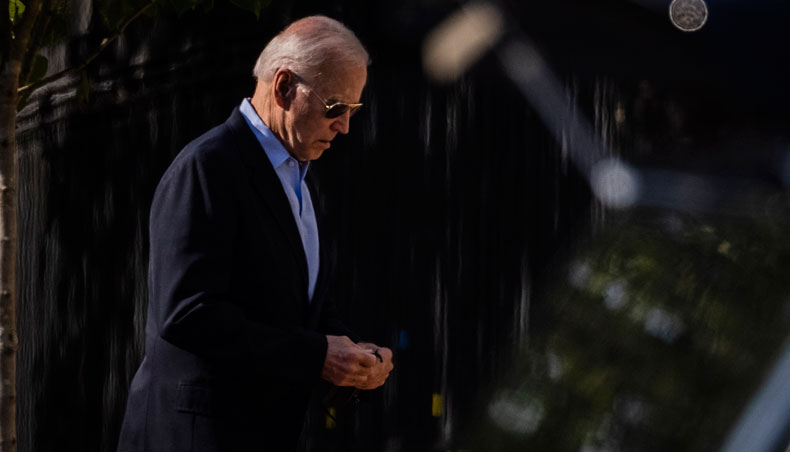 Joe Biden will fight what he calls a ‘defining’ battle for democracy on his first foreign presidential trip, meeting top US allies in Europe ahead of a tricky summit with Russia’s Vladimir Putin.

The busy agenda — with G7, NATO and European Union summits ahead of the Putin sit-down in Geneva — will see Biden fly the flag for a West he sees at an ‘inflection point.’

‘This is a defining question of our time,’ Biden wrote in The Washington Post ahead of his trip.

‘Will the democratic alliances and institutions that shaped so much of the last century prove their capacity against modern-day threats and adversaries? I believe the answer is yes. And this week in Europe, we have the chance to prove it,’ he added.

Biden’s pitch marks a return to a traditional US worldview after four years during which Donald Trump flirted with autocrats and recast multilateralism as a dirty word.

From there he flies to Brussels for NATO on June 14 and the EU meeting on the 15th, before heading to see Putin, whom Biden recently characterized as a ‘killer,’ in Switzerland.

That choreography — by far the most intense travel schedule since the 78-year-old took office — is designed to send a clear message to Putin: Biden will represent a democratic bloc, not just the United States.

‘He will go into this meeting with the wind at his back,’ National Security advisor Jake Sullivan said.

Trump argued that the United States can’t afford to be the world’s policeman, an isolationist stance popular with his voters.

But as the world crawls out of the coronavirus disaster, Biden is positioning the United States as the lynchpin for vaccine sharing and ensuring economic recovery. He has re-entered nuclear talks with Iran and reclaimed leadership over the planet’s climate crisis.

‘America is back,’ goes the Biden mantra. The alternative, secretary of state Antony Blinken told Axios, is China taking over or even ‘chaos.’

There was friction last month when Washington blocked French attempts at the United Nations to demand a ceasefire between Israel and Hamas in Gaza. Biden’s ramping up of vaccine donations around the world also follows what critics saw as a long period of hoarding.

Biden’s meeting on the side-lines of NATO with Turkish president Recep Tayyip Erdogan promises to be especially prickly.

In his first three summits, Biden can at least be assured of a friendly audience. Not so much in Geneva.

The White House sees extension of the New START nuclear arms treaty in February as an example of where business can be done. Biden also needs the Kremlin to make progress with Iran, which is close to Russia.

Biden blames Russia for the massive SolarWinds cyber-attack, election interference, and at the very least harbouring criminals behind ransomware attacks against the vital Colonial fuel pipeline and the US subsidiary of Brazilian meatpacking giant JBS.

Biden will also press Putin about sabre rattling on the Ukrainian border, the imprisonment of opponent Alexei Navalny, and his support for Alexander Lukashenko, the Belarussian strongman who forced a Ryanair airliner to land in Minsk, then arrested an opponent on the flight.

‘We should not expect any sort of US-Russian reset,’ he said, adding, ‘Relations will remain confrontational.’

For all his tough talk, Biden faces limitations, as illustrated in the US decision to drop sanctions meant to stop the Nord Stream 2 pipeline, now set to feed Germany with Russian natural gas.

However the Biden-Putin meeting goes, it is unlikely to end with the kind of performance Trump put on in 2018 after meeting the Kremlin leader in Helsinki.

Trump shocked even his own Republican loyalists by saying he believed Putin over his own US intelligence agencies that Russia had not interfered in the 2016 presidential election.

This time, the idea of a joint Biden-Putin press conference itself is up in the air.