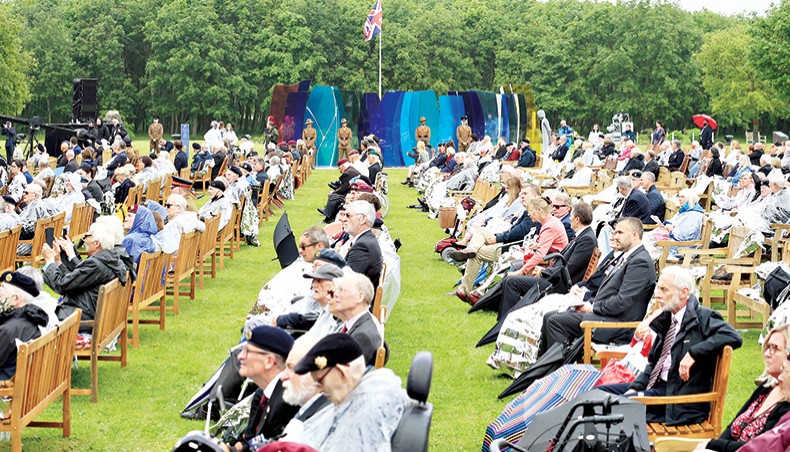 A memorial to almost 22,500 servicemen and women under British command killed during D-Day and subsequent battles is to be unveiled on Sunday in northern France, a tribute seen as a long overdue commemoration of their sacrifice.

The British Normandy Memorial, inscribed with the names of 22,442 men and women who lost their lives during the invasion of Nazi-occupied France in the summer of 1944, will open on a hillside in the Normandy village of Ver-sur-Mer on the 77th anniversary of the landings.

It overlooks Gold Beach, one of three beaches where British forces landed on the morning of June 6, 1944 to begin the liberation of Western Europe from Nazi occupation.

The memorial — constructed at a cost of £33 million ($47 million) met by both the UK government and private donors — is the first such in Normandy to commemorate those who fell under British command.

‘The construction of a national memorial in Normandy has been a long-held ambition of Normandy Veterans, frustrated that Britain alone among the main wartime allies did not have such a memorial,’ the Normandy Memorial Trust said in a statement ahead of the ceremony.

It consists of a series of 160 standing white stones where the names of the soldiers who fell are inscribed in chronological order from June 6 to August 31, 1944. Some 4,000 tonnes of stone were used.

The British heir to the throne Prince Charles, in a video message shared by the Normandy Memorial Trust, described the memorial as ‘long overdue’.

‘I have long been concerned that the memory of these remarkable individuals should be preserved for generations to come as an example of personal courage and sacrifice,’ he said.

‘The memorial... will provide a place of private and perpetual contemplation where visitors will be able to reflect on what we owe to all those who so gallantly carried out their duty with such extraordinary selflessness and resolve,’ Prince Charles added.

Soldiers from over three dozen nationalities, including from across the Commonwealth and French resistance fighters, served under British command in the landings.

Steven Dean, the manager of the project, said he hoped that the site could draw in a quarter of a million visitors every year.

Until now, the main site of pilgrimage for paying respects to those who died under British command has been the cemetery in the nearby town of Bayeux.

The American cemetery in Colleville-sur-Mer, whose 10,000 graves overlook Omaha Beach, used to welcome some one million visitors annually before the pandemic struck.

The ceremony, presided over by the British Ambassador to France Ed Llewellyn, accompanied by French defence minister Florence Parly, begins at 0830 GMT.

It will have added symbolism as a sign of the strong historical bonds between the cross-Channel neighbours in the wake of Britain’s exit from the European Union.

The site also includes a French Memorial, dedicated to the memory of estimated 20,000 French civilians who died in Normandy as a result of bombing and fighting.

Seventy-seven years on from the Normandy landings, the Covid-19 pandemic means that British survivors will not be able to travel to France for the event. However they can take part in an online relay being broadcast in the UK.

The June 6, 1944 landings by Allied forces on five Normandy beaches were the biggest naval operation ever in terms of the number of ships deployed and the troops involved.

By the end of what became known as ‘the longest day’, 1,56,000 Allied troops and 20,000 vehicles had landed in Nazi-occupied northern France despite facing a hail of bullets, artillery and aircraft fire.