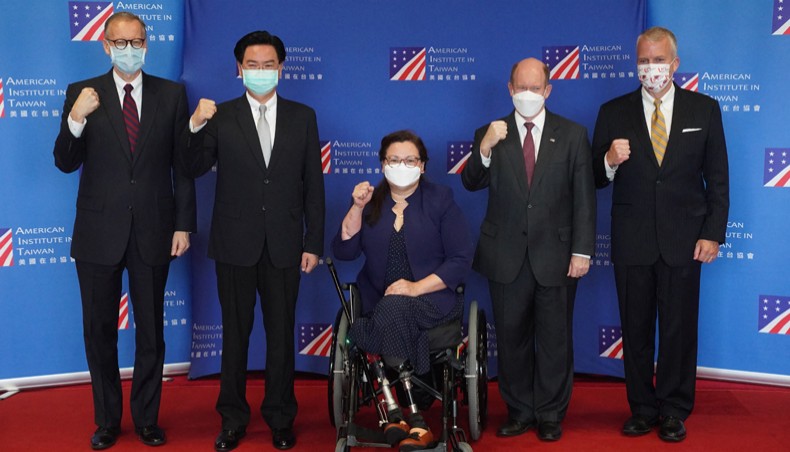 A bipartisan delegation of three United States senators landed in Taiwan on Sunday and announced that Washington would donate 750,000 coronavirus vaccine doses to its ally.

The high profile delegation and gift comes as Taiwan accuses China of hampering its efforts to secure enough doses as part of Beijing's ongoing campaign to keep the island isolated.

Senators Tammy Duckworth, Christopher Coons and Dan Sullivan -- two Democrats and a Republican -- landed on Sunday morning at Taipei's Songshan Airport in a US military plane.

‘We are here as friends, because we know that Taiwan is experiencing a challenging time right now, which was why it was especially important for the three of us to be here in a bipartisan way,’ Duckworth said.

‘It was critical to the United States that Taiwan be included in the first group to receive vaccines, because we recognise your urgent need, and we value this partnership.’

President Joe Biden announced last week that the United States would give around 25 million vaccine doses to countries that needed them, mostly through the global Covax vaccine sharing programme.

It is highly unusual for the United States to use a military plane to fly officials to Taiwan.

Washington remains Taiwan's biggest ally but it does not maintain full diplomatic relations with Taipei because it officially recognises Beijing.

Taiwan foreign minister Joseph Wu was among those greeting the senators.

‘Taiwan is facing unique challenges in combating the virus,’ he said.

‘While we are doing our best to import vaccines, we must overcome obstacles to ensure that these life-saving medicines are delivered free from trouble from Beijing.’

Until recently, Taiwan navigated the pandemic in an exemplary fashion, recording just a handful of deaths.

But cases have soared to more than 10,000 in the last month after an outbreak that began with airline pilots.

Taiwan has struggled to secure enough doses for its 23 million people.

Taipei has blamed Beijing for making it difficult -- a charge China has flat out rejected.

China's ruling Communist Party has never controlled Taiwan but it views the island as part of its territory and has vowed to one day seize it, by force if necessary.

Beijing has heaped economic, military and diplomatic pressure on Taiwan in recent years and keeps it locked out of international bodies such as the World Health Organization.

It bristles whenever countries send delegations to Taiwan or push for its recognition on the world stage.

Earlier this week China hit out at Japan for making a donation of more than one million AstraZeneca vaccine doses to Taiwan.