Ecological restoration far cry as pollution on in Bangladesh 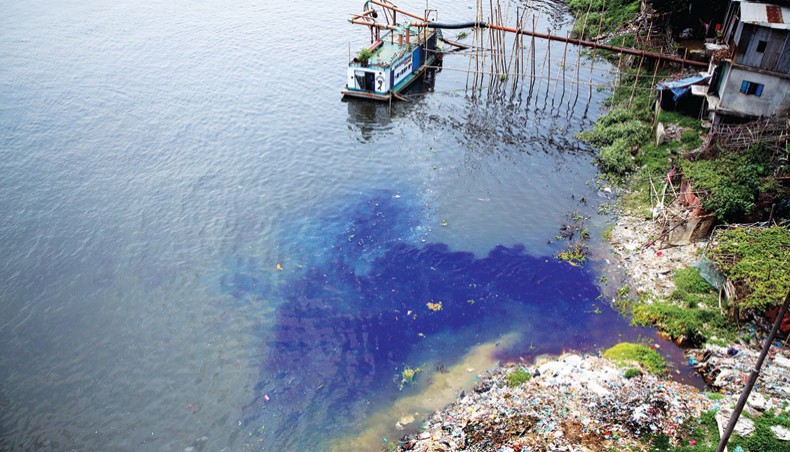 The release of untreated factory wastes and harmful chemicals continues to pollute the water of the River Sitalakhya at Knchpur in Narayanganj. This photo was taken on Friday. — Sony Ramany

All types of environmental pollutions including air, water, soil and sound pollution have continued unabated in the country and in many cases are on the rise risking the loss of ecological balance and posing health risks to the human population.

Against this backdrop, the country is celebrating World Environment Day today.

On the day environmentalists and green activists sent out an urgent call to all across the globe to reimagine, recreate and restore of the environment by planting trees, building greenery, changing diet and cleaning river and coast and making peace with nature. They asked nations to join #GenerationRestoration campaign.

Green activists in Bangladesh said that while the world community was thinking about restoring the environmental damage, Bangladesh is yet to curb the activities in the name of development and progress which are contributing to pollutions.

He said that currently, the coal-based plants in the country have 2.5 per cent of power supply capacity which is going to rise to 30 per cent.

Bangladesh Environmental Lawyers Association chief executive Syeda Rizwana Hasan said that the deforestation rate in Bangladesh is now double the global average, 2.6 per cent, soil degradation is 40 per cent, while illegal activities such as hill cutting, wetland grabbing, plastic pollution in the Bay of Bengal and air pollution continue unabated in recent year.

The strategy of prioritising development over environmental restoration will certainly make people suffer as their lives and livelihood would be affected in the long run, she said.

The green activist demanded some substantial moves addressing climate change and ensuring the protection of forests, wetlands, sea and an end to pollution.

Environmental minister Shahab Uddin, however, contested the allegation that the government move is responsible for the degradation of the country’s environment and told New Age that the ministry was not allowing any project that could harm the environment.

‘We want environment-friendly development,’ he said and added that the government was working to make people aware so that they do not pollute the environment and harm the ecosystem.

Sharif, on the other hand, said that the government was allowing projects that necessitate hill cutting and results in the depletion of forest lands.

Forest land grabbing, deforestation, air pollution and water pollution from industrial sources and domestic sources still continue and in many cases, things are getting out of hand.

‘The way Bangladesh continues to pollute the environment and encroach on the river and forest lands, restoration is a far cry here,’ said the green activist.

Green campaigners said that as pollution continued in different forms endangering wildlife in the country, which is also affecting the environment.

Forest department officials said that so far six dead whales were recovered from seashores of the country in the past 17 months while elephants, dolphins and other wild animals were found dead in places.

On September 2018, the World Bank reported 2.34 lakh deaths among the animal population in Bangladesh in 2015 linked to environmental pollution.

Green activists all these were symptoms of environmental degradation and demanded to take pragmatic steps to stop these.

The prime minister is expected to inaugurate the campaign.