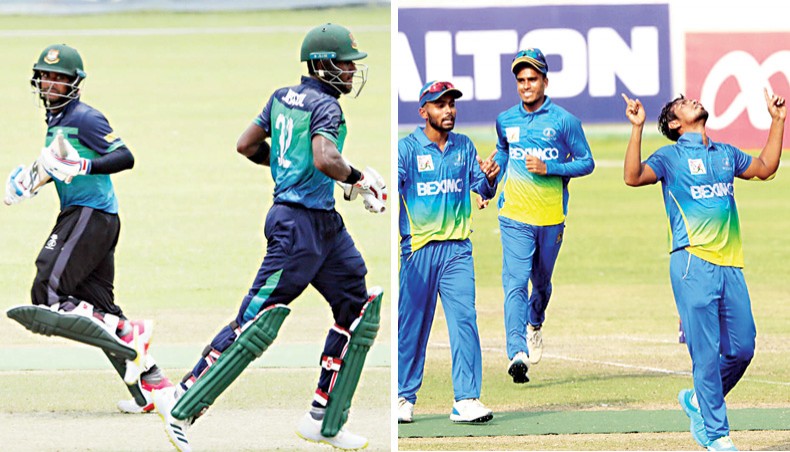 Khelaghar batsmen Mehidy Hasan and Jahurul Islam (L) run between the wickets while Shinepukur spinner Tanvir Islam (R) celebrates one of his three wickets during their respective DPL matches at the SBNS on Friday. — BCB photos

In the first match of the day, Khelaghar beat Legends of Rupganj by seven wickets and in the following game Shinepukur beat Sheikh Jamal Dhanmondi Club by 10 runs.

Khelaghar asked Rupganj to bat first in the opening match of the third round and the runner up team from the previous season managed only 138- 5 in the allotted 20 overs.

Al-Amin was the top-scorer for Rupganj with 51 runs off 42 deliveries while Masum Khan took two wickets for Khelaghar.

In reply, Khelaghar reached 140-3 in 19.3 overs and registered their first win in three matches.

Mehidy Hasan, who was promoted to number three in the batting order, made 54 off 45 balls and skipper Jahurul Islam made an unbeaten 53 runs off 44 balls, which also earned him the player of the match award.

In the afternoon game, Shinepukur posted 137-5 after electing to bat first with Tanzid Hasan and Robiul Islam top-scoring with identical 34 runs, the latter taking 26 balls to score his runs, five fewer than the former, and also remaining unbeaten.

Chasing 137, Sk Jamal were all out for 127 in 19.3 overs which handed Shinepukur their first win in the league so far.

Left-arm spinner Tanvir Islam did the trick for Shinepukur as his miserly bowling of 3-8 in four overs choked Sk Jamal to defeat.

Tanvir was judged player of the match for his fine bowling display, which also earned Shinepukur its first win in this year’s league.

In the evening game, Prime Doleshwar posted 144-6 after opting to bat first with Fazle Mahmud top-scoring with 39 off 31 balls and Saif Hasan making a run-a-ball 31.

Previously, rain interruptions forced Cricket Club of Dhaka Metropolis to organise three matches a day at SBNCS from June 2 to 5, but after today’s match BKSP ground 3 and 4 will once again start hosting matches.

The fourth round matches will be played across the three venues and two matches will take place at each venue on every match day.