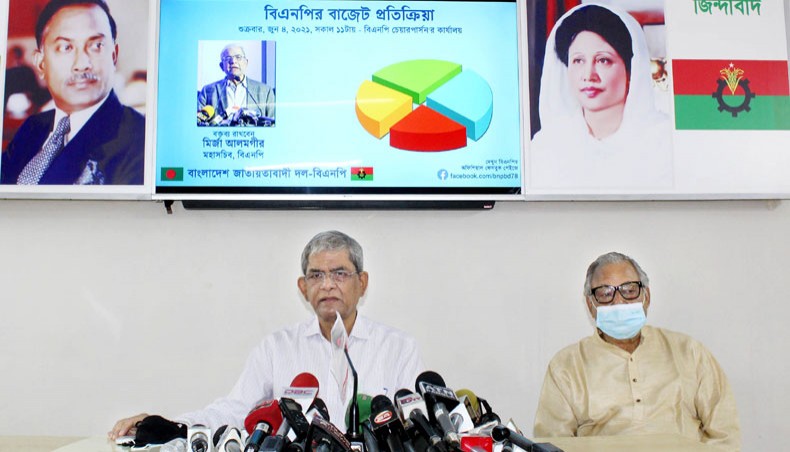 The opposition Bangladesh Nationalist Party on Friday said that the proposed budget for financial year 2021-22 completely failed to address the crisis created by the Covid pandemic.

‘The government shows no accountability towards the people, as a result, it did not try to consider the people as poor, ultra-poor and middle-class,’ BNP secretary general Mirza Fakhrul Islam Alamgir said at a press conference.

The party organised the press conference at its chairperson’s Gulshan office to give the party’s official reaction on the proposed national budget.

On Thursday, finance minister AHM Mustafa Kamal announced the proposed budget of Tk 6.03 lakh crore with tax and duty benefits for businesses but without any specific allocation for people who have newly become poor due to the Covid pandemic.

Fakhrul said that the government made the budget to make those people happy who would help them to continue corruption.

He said that implementation of the proposed budget was impossible and he termed the budget as ‘nothing but a paper-based one’.

‘We want a clear economic agreement to ensure governance and accountability, but this is absent in the proposed budget,’ Fakhrul said.

In this situation, BNP is giving a commitment to the people to establish a pro-people government through a massive mass movement, he said

‘The biggest thing is that the highest allocation has not been given to the health and social security sector in the new budget. But at the moment human health and social protection are most needed,’ Fakhrul said.

He said that about Tk 2 lakh crore would be borrowed from home and abroad. In the next financial year, only the interest of the loan will have to pay Tk 69 thousand crores. In this budget, the nation has been made completely dependent on debt.

He said the allocation for the social security sector is about Tk 1 lakh crore which includes pensions for government employees, interest on savings certificates and scholarships for primary school students.

‘For this reason, the allocation for the social security sector is being shown to be large. This means that even in the name of social security, people are being manipulated. To show the people the support that the government has given to the poor in this sector. It will not cost Tk 100 to Tk 200 per head for 5 to 6 crore poor people,’ he said.

He said that although the budget showed an increase of around Tk 3,000 crore in the health sector, the actual increase was only Tk 160 crore.

Fakhrul complained that the government had promised to vaccinate 25 lakh people a month though it did not mention when the vaccination will be started with this target.

He said that this year’s budget should not be just an annual budget, the budget should have been a guideline for the future economic policy of Bangladesh and a budget for the recovery of the economy.

‘The budget reflects the lack of democracy, human rights, freedom of speech, rule of law and accountability in the country during this government. We want a commitment to an economy that ensures good governance and accountability, which is missing in this budget,’ he said.