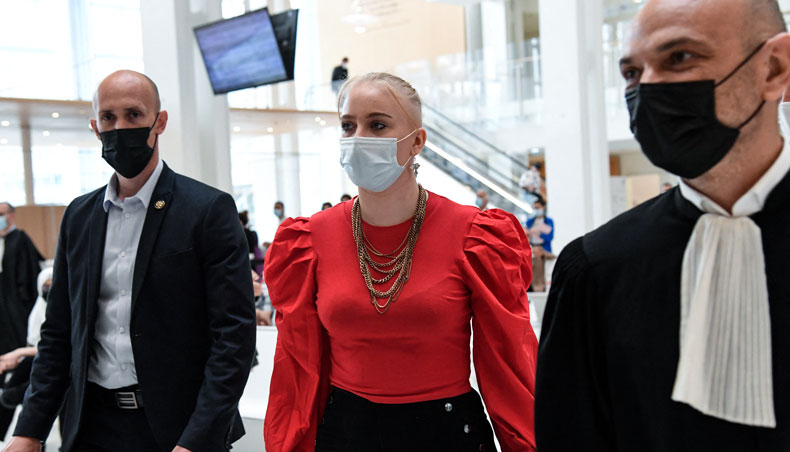 Eighteen-year-old Mila walks back to the courtroom with her lawyer Richard Malka after a break during the opening hearing of the so-called ‘Mila case’ trial where thirteen people face charges of online harassment and in some cases death threats against the then teenager who posted social media tirades against Islam, which saw her placed under police protection and forced to change schools, on June 3, 2021 in Paris. — AFP photo

Thirteen people went on trial in France on Thursday for online harassment, including death threats, against a teenage girl who was placed under police protection after posting anti-Islam rants on social media.

The treatment of Mila, who was forced to change schools over her expletive-laden videos, caused an outcry and fuelled a debate about the right to offend religious beliefs.

‘The Koran is filled with nothing but hate, Islam is a shitty religion,’ the teen said in the first post on Instagram in January 2020. She was 16 at the time.

She posted a second video in November, this time on TikTok, after the jihadist killing of high school teacher Samuel Paty, who had shown students controversial cartoons of the Prophet Mohamed.

The reactions to the video lambasting ‘your mate Allah’ were swift and virulent.

‘You deserve to have your throat cut,’ read one. Another warned ‘I’m going to do you like Samuel Paty’.

Mila was placed under police protection along with her family in Villefontaine, a town outside Lyon in southeast France.

Even president Emmanuel Macron came to her defence, saying that ‘the law is clear. We have the right to blaspheme, to criticise and to caricature religions.’

Investigators eventually identified thirteen people from several French regions aged 18 to 30 and charged them with online harassment, with some also accused of threatening death or other criminal acts.

Mila’s lawyer Richard Malka told the court that she ‘received more than 100,000 hateful messages and death threats promising to have her trussed up, cut up, quartered, beheaded, with images of coffins or doctored pictures of her decapitation.’

‘I cannot believe that these 13 people who have all been through our education system do not know that criticising religions is legal and has nothing to do with racism,’ he said.

France’s staunch defence of the right to mock religion and its crackdown on religious extremists have sparked protests in several Muslim countries, where the French have been accused of stigmatising Islam.

Defence lawyers argue that the 13 on trial are unfairly taking the rap for thousands of people taking advantage of the anonymity offered by social media platforms to settle scores online.

‘My client is totally overwhelmed by this affair,’ Gerard Chemla, a lawyer for one of the accused, said ahead of the trial, adding, ‘He had a fairly stupid instant reaction, the type that happens every day on Twitter.’

The accused face up to two years in prison and fines of 30,000 euros for online harassment.

‘There’s no anonymity. From the moment you commit a crime on internet, you can be found, you can be found and maybe judged before a court,’ Mila later told reporters after the trial had been adjourned until June 21 following a four-hour examination of procedural questions.

‘That’s why we are here today. It’s time to realise it and say it: fear is changing sides.’

Her white blonde hair shaved on the sides, she urged people to join her and form ‘strength in numbers, in the face of threats and harassment which will only worsen if we do nothing, if we continue to submit’.

Mila, now 18, and whose criticism of Islam has endeared her to the right as well as champions of free speech, is publishing a book this month titled ‘I’m paying the price for your freedom.’