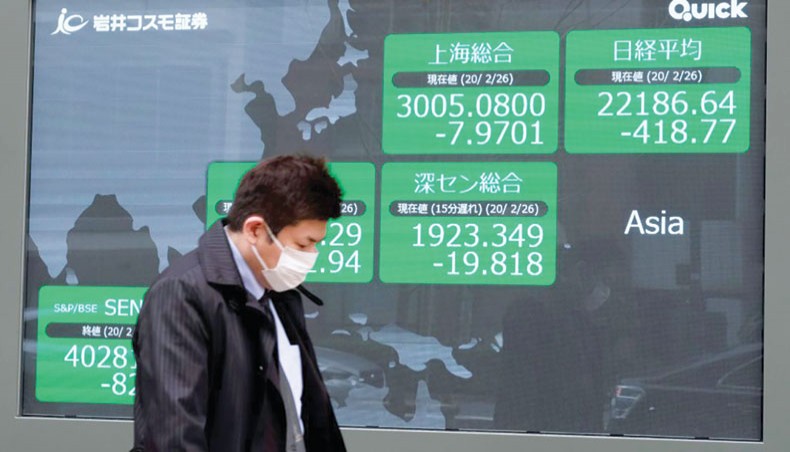 Most Asian markets rose Thursday, with focus on the upcoming release of key US jobs data, while traders were also trying to gauge when the Federal Reserve will begin reconsidering its ultra-loose monetary policies in light of a robust economic recovery. — AFP photo

Most Asian markets rose Thursday, with focus on the upcoming release of key US jobs data, while traders were also trying to gauge when the Federal Reserve will begin reconsidering its ultra-loose monetary policies in light of a robust economic recovery.

Oil prices also extended gains, fuelled by growing optimism that the reopenings and coronavirus vaccine rollouts will lead to a surge in activity over the coming months and ramp up demand.

Friday’s non-farm US payroll figures will provide the most recent snapshot of the world’s top economy, with expectations for a big jump as businesses restart and people return to some semblance of normality.

However, observers pointed out that the recovery in the jobs market is not as smooth as hoped as some choose not to return to work yet owing to a number of issues including lingering virus fears and the handouts in President Joe Biden’s stimulus earlier this year.

And they added that increased demand for labour is adding to upward pressure on inflation — as wages rise and some companies offer cash incentives — which is already being fired along by supply shortages and high energy costs.

This in turn is causing a headache for the Fed, which has pledged to keep its accommodative monetary policy in place for the foreseeable future but also has to make sure price spikes do not get out of control.

The ultra-loose policies, including record-low interest rates, have been a key driver of a surge in equities from their nadir in April 2020.

Vaccinations had contributed to the ‘somewhat faster rate’ of recovery in recent weeks, it said, but ‘significant supply chain challenges continued to disrupt production’.

Employers were having trouble filling posts, which ‘prevented some firms from increasing output’ and in a few cases forced cuts in hours of operation, before warning ‘looking forward, contacts anticipate facing cost increases and charging higher prices in coming months’.

Expectations the Fed will move sooner than expected have increased as some board members have recently started talking about discussing a windback of its bond-buying programme.

Philadelphia Fed President Patrick Harker added to the discussion Wednesday, saying it was ‘appropriate for us to slowly, carefully move back on our purchases at the appropriate time’.

‘We have to be careful in removing accommodation so that we don’t create any kind of ‘taper tantrum’,’ he added. ‘And that’s why we need to communicate very early, very often what we’re going to do.’

While investors took the comments largely in their stride, with all three main Wall Street indexes ending in positive territory, they remain on edge for any sign the bank will change course, particularly at its next policy meeting.

In Asia, the mood remained broadly upbeat though early momentum was lost through the day.

Tokyo, Sydney, Seoul, Singapore, Mumbai, Jakarta and Taipei rose, though Hong Kong was weighed by a drop in property firms. There were also losses in Shanghai, Wellington and Manila.

London, Paris and Frankfurt were all down in early trade.

Oil prices continued their upward spiral, supported by a decision Tuesday by OPEC and other key producers to only gradually lift output in response to the global recovery, while expectations for a return of Iranian crude have dimmed slightly.

Brent peaked at $71.99 and WTI briefly hit $69.40 before both pared their gains, though they remain at multi-year highs and observers say that with demand expected to pick up, they could go even higher.