Thousands rally in Sudan, upping calls for justice over 2019 killings 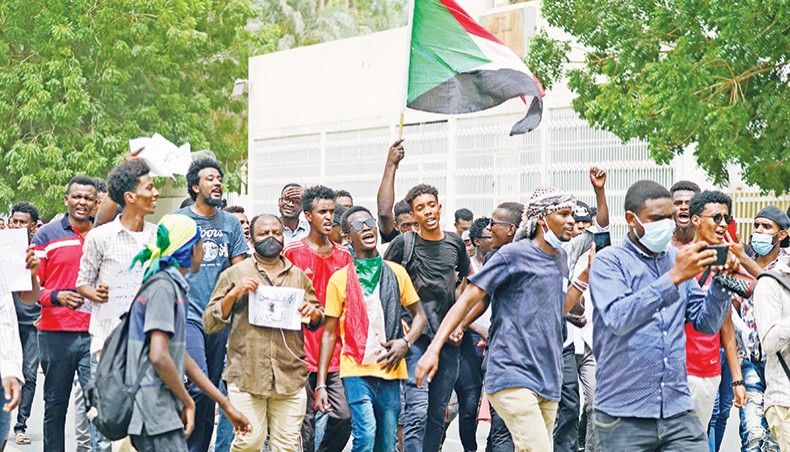 Sudanese protesters shout slogans and wave their country’s national flag as they march in the capital Khartoum, on Thursday, during a demonstration calling for justice for protesters killed during anti-government demonstrations two years ago. — AFP photo

Thousands of Sudanese took to the streets of Khartoum on Thursday, stepping up their demands for justice for protesters killed during a crackdown on anti-government demonstrations two years ago.

The rally falls on the second anniversary of the violent dispersal of a protest camp outside the army headquarters in Khartoum which brought about the ouster of longtime autocrat Omar al-Bashir in April 2019.

‘We came here to mark the sit-in massacre and to show that even after Bashir’s ouster, people are still suffering,’ said 24-year-old Eman Babiker, who complained of rampant unemployment.

Carrying the Sudanese flag and banners demanding justice, the protesters marched to the cabinet building and the public prosecutor’s office, some singing the national anthem, an AFP correspondent said.

‘We want to send a message to the government that we can always take to the streets if they fail to bring justice to those killed,’ protester Walid Shazli said.

Ahead of Thursday’s protests, Sudanese authorities had closed off the main roads leading to the army headquarters in Khartoum and urged demonstrators to stay away from the site.

In a statement, the cabinet said it was holding talks with security apparatuses to speed up the delivery of justice to the victims.

The interior ministry said police had taken all necessary ‘measures to secure safety of protesters as well as strategic and vital facilities.’

In May, a similar rally was held in Khartoum to mark the sit-in dispersal anniversary during the holy month of Ramadan.

Sudan’s army said later it had handed prosecutors a list of army personnel suspected of involvement in the latest killings.

The 2019 protest camp in Khartoum initially called for an end to Bashir’s rule but remained for weeks after his ouster, demanding a transition to civilian rule.

In June 2019 and towards the end of Ramadan, armed men in military fatigues violently dispersed the encampment.

The days-long crackdown left at least 128 people dead, according to medics linked to the protest movement.

The ruling generals at the time denied ordering the bloody dispersal and called for a probe into the incident.

An investigation committee was launched in late 2019 to look into the events, but has yet to finish its inquiry.