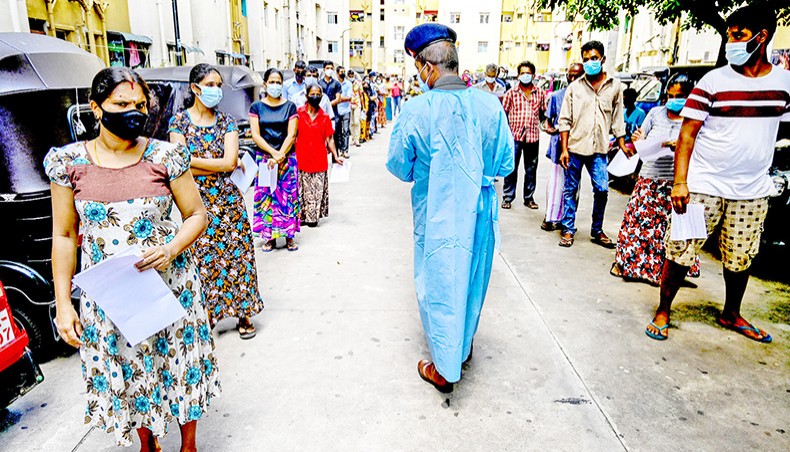 People stand in a queue as they wait to get a dose of the Chinese-made Sinopharm Covid vaccine in Colombo on June 1. — Agence France-Presse/Ishara S Kodikara

A GOVERNMENT minister has pronounced that the vaccine alone may not resolve the Covid emergency perhaps to comfort those who are not able to access the vaccine. For a similar reason another government minister has said that a second dose of the vaccine may not be necessary to give effective protection from the coronavirus. Yet another minister has stated it may be possible to give a second vaccine that is different from the first and that research is underway in the country to ascertain this. There were high expectations when president Gotabaya Rajapaksa was elected that the country would depoliticise its decision-making and a new era of expert decision-making would end the role of politicians in it. This would have reversed the downside of the constitutional change made in 1972 that elevated the power of elected politicians over the state bureaucracy to make decision-making more accountable to the people.

A half century later, even under the administration of a president of whom much has been expected, Sri Lanka runs the risk of becoming the laggard of South Asia even as it borrows dollars from India and now Bangladesh. The politicisation of decision-making has cost the country heavily in a very visible way in terms of dealing with the coronavirus. Sri Lanka enjoyed initial success due to tough measures to implement a two-month lockdown last year implemented primarily by the security forces. The security forces also performed their intelligence function with skill, tracing those who had been infected and those who were their close contacts. But when politics took over it went downhill fast. The manner in which government ministers took on the concoctions of those who claimed metaphysical powers and knowledge that went beyond regular science was beyond belief.

The knowledge of the national universities and professional associations in those fields was set aside and politically connected experts given pride of place. Why turmeric, an essential food item and a household antiseptic, was singled out from all other spices to be banned and imports that were seized were burnt have no rational explanation. In the case of the coronavirus, irrational belief in the occult meant that valuable time was lost. Sri Lanka failed to place the necessary orders for vaccines on time. It may be that as in the case of the ban on chemical fertilisers that was imposed on farmers with hardly any notice, there was a belief that the country could conserve its scarce foreign exchange by relying on indigenous knowledge. The price that is being paid today for irrationality is a heavy one. A minimum of 30 deaths, each one some family’s beloved, are reported each day along with close to 3000 new cases.

THE country is going into its third week of lockdown that was imposed without giving the people sufficient notice to make alternative arrangements with regard to their livelihoods and food supplies.

The impact of political decision-making can also be seen in the priority lists that have emerged in practice to deal with the short supply of vaccines. Decision has been made to prioritise the claims of certain categories of persons who have personal relations with decision makers. This is indicative of the breakdown of the rule of law, which is not just any law, but law that is just. The most shocking omission from the priority list has been the neglect of those over the age of 60 which has not been the practice in countries that have given priority to life over other considerations. As a result entire homes for elders have been infected by coronavirus. In a suburb of Colombo, all 29 inhabitants have tested positive for Covid, and in Kandy an elders’ home with 100 has had 40 inhabitants testing positive. Their chances of survival will be low in relation to those favoured ones have got the vaccine.

A seminal article on this theme has been written by Dr T Jayasingam, professor of botany and former vice-chancellor of Eastern University. ‘It is shocking but true. 70 per cent of the 801 (around 560) persons who had died of Covid until May 10, 2021, as per the statistics by the Epidemiology Unit of the ministry of health dated May 10, 2021 were above the age of 60. Most of them would have been people who had led careful lives to get to that point, only to be struck down by a virus that caught their government unprepared…. There are about 18 per cent of population above 60 years of age and death of 70 per cent of that category is out of proportion. The need for vaccinating the over 60 years age category as done in other parts of the world was highlighted in the media from February 2021 onwards when the possibilities of vaccination was becoming a reality.’

Older people might be less able to work and bring in income to the family and to the country. But they are the repositories of the country’s history and culture and the guides of the younger generations who risk losing their way in the rush to development sans values. It is important that these vulnerable groups are reached by the vaccination process because the protection of the most vulnerable is the sign of a civilised society. The death last week of Ven Baddegama Samitha, aged 68, of Covid induced pneumonia is a great loss to the country at large. The venerable monk was a committed socialist and non-violent activist who had to flee the country during the period of the JVP insurrection in the late 1980s when he was in the university. He went to England and obtained his university degree there and obtained a breadth of learning that he used in his political career. He was the first Buddhist monk to win election to parliament which he did on a socialist platform as a member of a left wing political party. He supported the peace movement and was a champion of inter-ethnic harmony.

COVID also took away former speaker WJM Lokubandara and TNA mp Thurairatnasingam. Another less well known person who died of Covid during the last week was Sunil Jayaweera, aged 60, chairman of the Panduwasnuwara Pradeshiya Sabha whom I met in April this year. This was on the occasion of the opening of an inter-religious harmony centre in a predominantly Muslim village in Kurunegala district. He had come along with other dignitaries from the area, including Buddhist monks and the police as a gesture of inter-ethnic solidarity. He spoke a few words on the occasion. Among the points he made was that the younger generation had fewer inter-community linkages than those of older generations. This may be due to the changing nature of society and the economy where people spend less time with other people and more time with machines or doing narrow and specialised jobs. He showed the value of the older generation that the Covid virus is taking away from us.

When I called the Moulavi at the village who had invited me to inquire about chairman Jayaweera’s untimely death, he said that several people in the village too had succumbed to Covid. He said that his relative had refused to go to hospital until it was too late. The issue of Muslim burial in their home areas is important to Muslims so they prefer to take the risk and stay at home rather than having their bodies cremated or sent to faraway Ottamavedi in the east which is the only place the government has permitted burial of bodies of Covid infected people to take place. With Covid spreading swiftly across country regardless of the ban on burials of Covid bodies, the government needs to reconsider its insistence on cremation which is a harassment to Muslims, outside of WHO guidelines and is not found in other parts of the world.

Instead of digging in its heels, the government also needs to reconsider its policy of not giving priority in vaccination to those in the age group above 60. Now more than at any other time, when the country lurches from crisis to crisis, whether in term of how to deal with its economic debt, the crisis in agriculture due to the fertiliser ban which is causing unrest amongst farmers, or the role of China in Sri Lanka, there is a need to safeguard the repositories of history and culture to the extent possible. The politics of decision making which is led by non-experts in the field of health needs to give way to the opinion of experts who adhere to international practice. The way to restore the waning spirits of the people is to show commitment to the defeat of Covid. In the midst of lockdown the airport is being opened with the promise of tourists. Focusing on boosting incomes through bringing in 2,500 Ukrainian tourists, continuing with mega-highway projects or even Port City itself, is no substitute for saving lives.