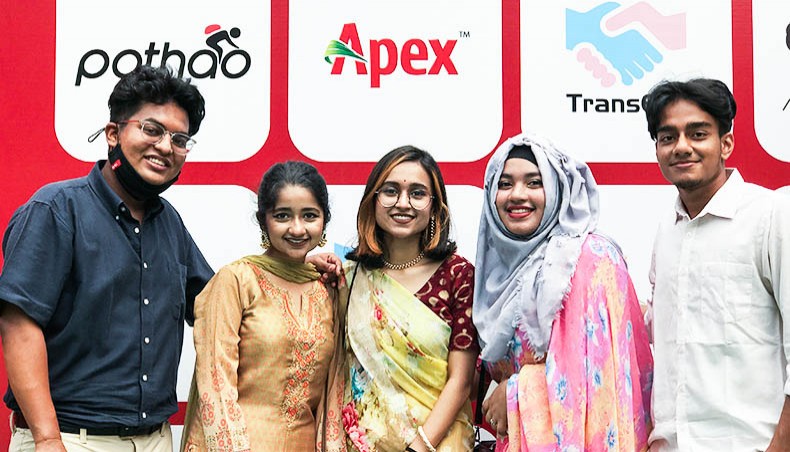 Youth-led non-profit organisation TransEnd, founded in December 2019, is working to empower the transgender community in Bangladesh. Talking with the TransEnd team, Nasir Uz Zaman writes about the organisation

TransEnd is a Bangladeshi youth-led non-profit organisation that is working to empower the culturally-economically marginalised hijra, non-binary, genderqueer, and intersex communities and to bridge the gap between the mainstream community and the transgender community, locally known as hijra. The organisation is trying to meet its goal through education and sensitisation programmes, training sessions, healthcare, employment and entrepreneurship.

Education and sensitisation programme is one of the very important parts of TransEnd which includes various social awareness campaigns, talks and teaching people about the gender spectrum. From the context of Bangladesh, there are many misconceptions about the concept of gender among the people and it is one of the main reasons why transgender people are treated differently and poorly.

Besides two successful campaigns named Intersex Awareness Campaign (Oshadharon Kichu Shadharon) and Trans Awareness Campaign (Transforming Mindsets), the organisation is regularly creating contents in various forms to teach people about gender spectrum — what is the difference between gender and sex? How one should treat a hijra person? What does transgender mean?

According to the data provided by TransEnd, 87 per cent of transgender people have no scope to get proper medication when they fall sick. They often face discrimination while seeking treatments from clinics and hospitals. TransEnd aims to solve these problems by partnering with local hospitals and organisations to avail free mental health service, free personal hygiene equipment and also medical campaigns for the hijra community.

One of the main visions of TransEnd is to empower the community and for this, the organisation arranges workshops and training sessions and helps them through employment opportunities. TransEnd’s workshops and training sessions include various subjects such as English speaking, fashion and lifestyle, etiquette and manner, basic computer skills, graphics designing, arts and crafts and many more.

TransEnd team shared with New Age Youth that there are about one million transgender people in Bangladesh and 95 per cent of them are involved in either sex trading or begging for their livelihood. TransEnd’s vision and mission are to create sustainable development through employment opportunities for those hijra people after the training sessions.

‘But there are a lot of obstacles as most of the mainstream institutions do not want to give jobs to these community people no matter how qualified the person is. This is why we are arranging sensitisation programmes to convince or aware those business persons and inspire them to give jobs to these community people and we have already made some little impacts doing so,’ said the TransEnd team.

To know the story behind the organisation, New Age Youth talked with the founder and chief executive officer of TransEnd Lamea Tanjin Tanha. Tanha said that at the age of 12, her mother shared a story with her about how she interacted with a bunch of hijra people who came to the newborn baby house to give blessings.

Her mother was very welcoming towards them, unlike many others which made the hijra leader, Mala Hijra, in tears with emotion. Then, Mala Hijra shared the life struggles with her that made the mother emotional too. While sharing the story, Tanha's mother advised her to be empathetic towards them and to do something for them in her life.

The story moved her and she determined to help them no matter how challenging it was. In Tanha's words, ‘I did a lot of fieldwork before organising the platform. I believed, if I do not understand the hijra people, I cannot work for them. I used to talk to them in local transports, in parks and also going to their hubs. It helped me to understand their psychology, their needs and their sufferings. Each of them has individual stories and most of them are full of miseries. Those stories made me strong and determined about creating the organisation.’

Though TransEnd is a newly founded organisation the campaigns, projects, activities and initiatives it has taken is quite successful and remarkable.

Tader Tore is a fundraising programme of the organisation for the transgender and hijra community of Bangladesh. In this ongoing project, TransEnd has already helped more than one thousand hijra people with 15-20 days-worth food package and hygiene products.

In 2020, TransEnd helped three hijra people getting appointed in three different fashion houses as freelance models through its training session on fashion and lifestyle. According to Shuborna Hijra, ‘I always wanted to become a model but could not because of my gender identity and I collected money from local bazaars before I met TransEnd. After a training session, they helped me getting appointed to a fashion house as a model. It makes me confident about myself and I dream that someday I can be one of the most popular fashion models in the country.’

The team members of the organisation have already talked to some of the famous fashion designers like Bibi Russel and others to include more hijra people in the fashion industry.

Through Project Nobojibon, organised by TransEnd and sponsored by EMK Centre that was held in February 2021, a training workshop was arranged for the hijra people. The participants of the workshop were taught how to make different handicrafts, sewing, tie-dye, block-batik, tailoring, screen printing and many more so that they will have the scope to work according to the required skills.

Being a communication partner of the initiative Shadinota Shobari (Freedom For All), TransEnd helped Pathao to employ 50 transgender people as food delivery agent on the occasion of the 50th anniversary of Bangladesh. The month-long program consisted of several surveys, interviews, field research, training on cycling, digital literacy, communication et cetera and finally, Pathao, sponsored by Apex, gave 50 cycles and smartphones to 50 transgender people and gave the job as food delivery agents.

Through the project Ushnotar Khoje, TransEnd arranged a crowd-funding campaign collaborated with local non-profit organisations and donated over 900 blankets to poor transgender people who mostly live in the northern part of the country to help them survive in the winter during the COVID-19 pandemic. Moreover, during the pandemic COVID-19, TransEnd has initiated a fund-raising campaign through which we provided more than 1500 unprivileged, jobless hijra people with food, blankets, and hygiene items to tackle the pandemic and survive.

While talking about the upcoming activities of TransEnd, Tanha informed New Age Youth that they are working on building an app named Nirapotta to prevent cyber harassment towards gender-diverse people. Moreover, a social awareness campaign titled Fashion, Identity and Inclusion is going to happen from the middle of May collaborating with fashion brand Broque to showcase the history of fashion and cultural association of transgender and gender diverse community throughout the world.