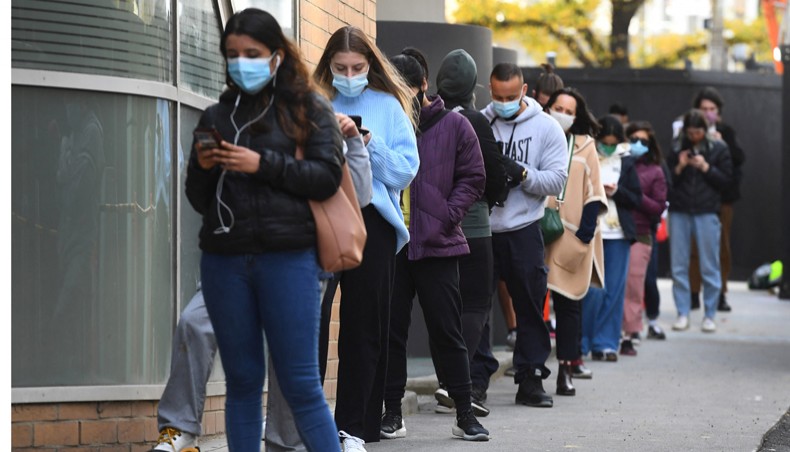 People queue for a Covid-19 test in Melbourne on May 27, 2021 after five million people in Melbourne were ordered into a snap week-long lockdown following another Covid-19 virus outbreak. – AFP Photo.

Five million people in Australia's Melbourne were ordered into a snap week-long lockdown Thursday, with officials blaming Australia's sluggish vaccine rollout and hotel quarantine failures for yet another virus outbreak in the country's second-biggest city.

Facing a cluster of 26 cases linked to the ‘highly infectious’ Indian strain of Covid-19, authorities issued stay-at-home orders for Melbourne and surrounding Victoria state from midnight.

It is the fourth time Melbourne has been plunged into lockdown since the pandemic began, including nearly four months of harsh restrictions last year.

The cluster is believed to have begun with a traveller who returned to Australia from overseas despite a mandatory 14-day quarantine.

The latest outbreak has intensified criticism of flawed quarantine facilities and a national vaccine rollout that, according to acting state Premier James Merlino, is ‘not where it should be’.

‘If more people were vaccinated, we might be facing a very different set of circumstances than we are today. But sadly we are not,’ he said, pointing blame squarely at the conservative federal government.

Some local residents rushed to get jabbed Thursday, as the state opened up mass vaccination hubs to people aged 40-49 for the first time.

Jane Oliver-Read, 56, spent more than an hour in a queue that was "snaking around the building" in central Melbourne to receive her first jab.

‘I'd always planned to come in this week to have it, so the outbreak in Melbourne has confirmed that it's the right thing to do,’ she told AFP.

The virus has leaked out of make-shift hotel quarantine facilities across Australia 17 times in six months, according to the opposition Labor party.

‘If we had an alternative to hotel quarantine for this particular variant of concern, we would not be here today,’ Merlino said.

Before the lockdown was announced, thousands of people across Melbourne were already self-isolating after cases were detected at dozens of locations including two separate Aussie Rules football matches, a series of nightclubs and a medieval battle re-enactment.

The ‘circuit-breaker’ is designed to allow contact tracers to get on top of cases, with residents permitted to leave home only for essential reasons including getting vaccinated.

Schools, pubs and restaurants are set to close, while gatherings will be banned and mask-wearing made mandatory.

But professional sporting fixtures can go ahead without crowds and people living alone can create a ‘single bubble’with another person.

New Zealand has already suspended its travel bubble with Victoria and while residents are now being shut out of other Australian states, prompting major airlines to slash Melbourne services.

In recent months, Australians had largely been enjoying few restrictions after the country successfully contained the spread of coronavirus.

But outbreaks in Taiwan and Japan have underscored how initial success containing the virus can quickly be eroded without widespread vaccination.

So far Australia has administered about 3.7 million vaccination doses in a population of 25 million, with just a fraction of residents fully vaccinated.

‘We will do everything we can to protect the lives and livelihoods of Australians, and we have lost 910 souls to Covid already during the course of this pandemic. Of course that is not anything near what we have seen in other countries,’ he said.

Morrison urged eligible Australians to get vaccinated, saying the ‘wonderful and enviable’ way of life Down Under during much of the pandemic had led to some vaccine hesitancy.

Australia has recorded about 30,000 Covid-19 cases to date -- the vast majority in Victoria during last year's devastating second wave.