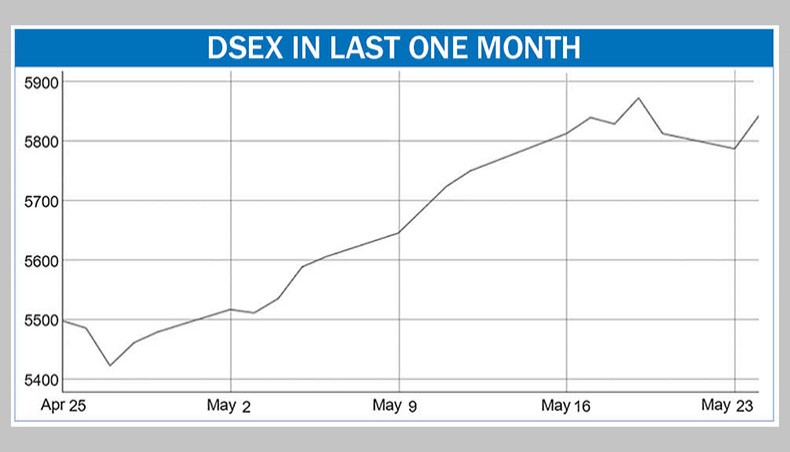 Dhaka stocks advanced on Monday after a fall in the previous two sessions as investors resumed buying shares, especially those of banks and non-bank financial institutions.

Investors went for buying shares of banks and NBFIs after profit booking sales in the last couple of days, they said.

Average share prices of mutual fund, NBFI and bank sectors advanced by 3.9 per cent, 2 per cent and 1.7 per cent respectively.

Market operators said that share prices of many financial companies remained lucrative that provoked the investors to buy the companies’ shares.

Besides, share prices of insurance companies are gaining continuously after the media reported past week that the BSEC had asked the market intermediaries and stock exchanges to provide health and life insurance policy immediately to their employees.

The general insurance soared by 2.5 per cent with logging 21.3 per cent of the day’s total turnover.

Surge in share prices of BRAC Bank, British American Tobacco, Al-Arafah Islami Bank and Eastern Bank contributed most to the rally on Monday.

Share prices of Walton Hi-Tech Industries Limited increased by 2.97 per cent on Monday. The company’s earnings per share for January-March period soared to Tk 12.79 from that of Tk 5.17 in the same period in the previous year.

Share prices of Khulna Power Company Limited plunged by 1.9 per cent for the second day on Monday after the media reported that the Bangladesh Power Development Board asked the company to shut down its production as tenure of power purchase agreement between the KPCL and the BPDB will end this month.

EBL Securities in its daily market commentary said that the rise in the core index was driven by the increase in all the major sectors, including bank and NBFI.

The dominance of buying regained on selective issues while most of the investors rushed to get a hold on the hyped-up insurance stocks on the bourse on Monday, it said.

The key index has gained more than 700 points in the last one and a half months.

BEXIMCO led the turnover chart with shares worth Tk 138.99 crore changing hands on the day.

Republic Insurance and Genex Infosys were the other turnover leaders on the day.