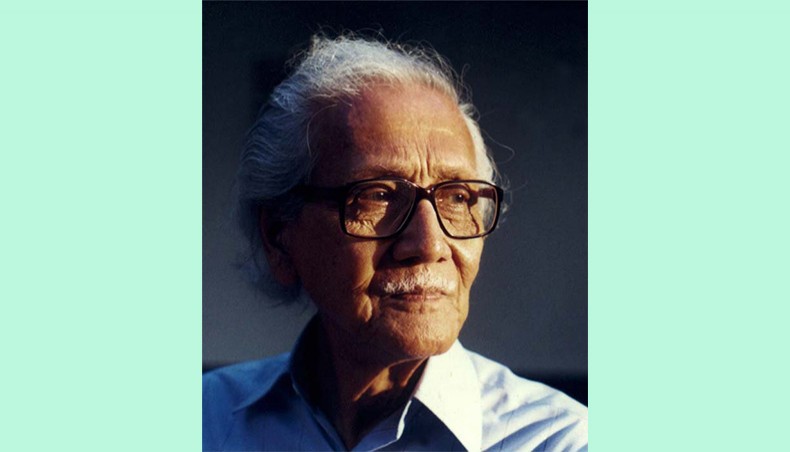 May 20 marks the ninth death Safiuddin Ahmed, a prominent painter who was born in Kolkata in 1922. With Independence Award and Ekushey Padak under his belt, he has influenced art in the port-independence Bangladesh. Susmita Barua talks about his life works

THE art and the artist cannot achieve any success without being immersed in the eternal creation. Art is a meditation, a monastic life — this meaningful pursuit, creation, aesthetics, begins in the work of the artist Safiuddin Ahmed.

He is the artist who has created a place of dignity in India and abroad. In his hunger for self-satisfaction, he went to work. As a modern and life-oriented painter, he has constantly worked on anthropomorphic transformations. Solitary, self-contained, not conventional, but undoubtedly fundamental — are the characteristics of this artist.

He is distinguished by the intensity of feeling, the artist's emotion, sensation, direct life, the sure form of the strong pull line of the brush, and the intense brightness of colour. He has worked till his self-satisfaction and perfection have not come. If he didn't like it, he had ruined that work.

He has studied art at Calcutta Government School of Art in 1936. Somnath Hore contributed to the innovation of his work. In 1956 he went to study at the Central School of Arts and Crafts in London. Famous print artist Stanley Hetter is his teacher. Marilyn Evans was the head of the printing department at the time.

His energy, his temperament, brought a new individuality to the ‘flood’ series, which caught everyone’s attention. He has done polygonal work. Man, nature, surroundings reveal the depth of his work. Real images, boats, sails, shades of traditional motifs are found in his work. Sketches of the river Dumka and oil paintings introduced new trends in his creations. The work of oil painting is solitary, full of self-realisation.

The use of colours and lines is lively and harmonious in his works; I get a concerted effort of subtle technique. Well-planned, well-arranged, individuality in his work disillusionment erupted. The consciousness of beauty is stimulated, elevated in his work. His modesty in his thoughts is exemplary. His work is rich in consonant and multidimensional fine details, excellent idea of fine details in colour and application of bright colours. There are many touches of life in the work of the artist Safiuddin, but no unexplained force seems to be controlling him.

In search of tradition, he has always worked in creation. He has done a lot of work in an oil painting on village houses, scenery, Santals’ way of life and river Dumka’s memory. His work was influenced by Cubism. He has worked to break the signs of folk art in a modern way. Meditation and deep feelings are present in his work. In the style of colour weaving, he has created invaluable art. The artistic balance, the self-awareness, the harmony of tradition, and the global consciousness of an artistic man are found in the work of oil paint, whose work is very perfect. The woodwork is a pie of art and aesthetic splendour.

Santal women, on her way to home, on the way to Santiniketan, Mayurakshi and back home — is the remarkable work of him. By drawing the agitated fish, the longing of the afflicted heart would be expressed in his work, as if it were a deep rebellion. Strong consciousnesses of holding the heat of time, eyes have become a central theme in Safiuddin’s paintings since the language movement. By symbolising the eyes, people’s helplessness and the feeling of persecution of death are being expressed in the work.

These eyes are the centre of the body and mind. The sharpness of the eyes, the depth of vision creates far-reaching thoughts. Fear, uncertainty, and a strong desire for revenge, longing, and crisis - everything he is expressing through his eyes. The experience gained through oil painting, woodcuts, and etching has made his pictorial language even more unique. The effort of helplessness, the screaming of pain, the drawing of frightened expressions, attempts of the central consciousness came to his work as the background of the language movement.

The hard days of the liberation war revolved around his work. Life through uncertainty, he was restrained in the use of colour in its expression. The subject, the colour, is expressed as a complement — a symbol of sorrow, despair, suffering, helplessness, the boundless suffering of the Bengalis, and bravery. Love for homeland and the sorrows of the flood is symbolised in the film. Wisdom, the perspective of art, is expressed in the next film of 1971. The use of melancholy blue colour in creating a cold mood and amazement, on the other hand, the weakness of black colour also touches him.

Engraving is a unique creation of artistic, rhythmic, poetic, linear, artistic knowledge and perspective. He was fascinated by classical music, which we see in the work of the artist. There are similarities between the ups and downs of music and the subtle strokes in print. Richness in musical quality brought perfection to his work.

The source of work energy is grammar. That is not to say that you have always followed grammar. Like himself, he has created new trends for himself by changing the grammar to his own needs. This great artist died on this day in 2012. He was awarded Ekushey Padak in 1978 and Independence Day Award in 1996 by the government of Bangladesh.

Susmita Barua is an independent researcher and art historian.