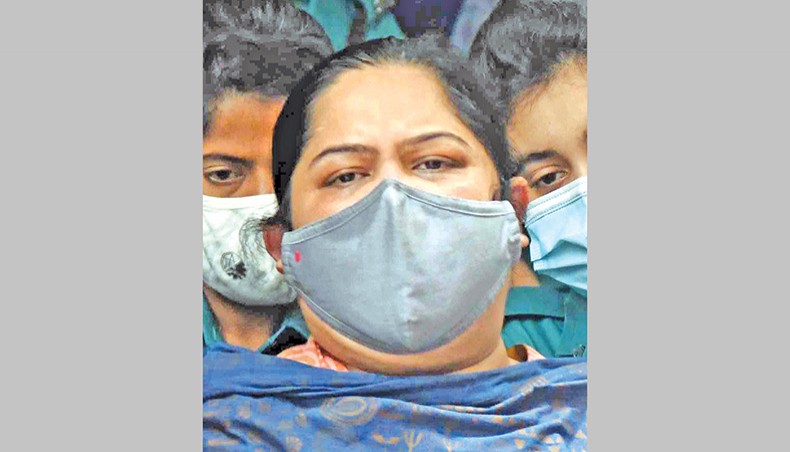 A Dhaka metropolitan magistrate’s court on Thursday set Sunday to give its decision on whether journalist Rozina Islam would be given bail or not in the case filed by a health ministry official on May 17 when she was reportedly gathering documents at the ministry.

Political parties, journalists and cross-sections of people continued protests against harassment during a five-hour confinement at the ministry while she was carrying out her professional duty and called for the urgent release and withdrawal of the case filed with Shahbagh police station on May 17 on the charge of theft and spying, among others.

The Dhaka Reporters’ Unity in a protest rally on Thursday called for another demonstration on Friday morning and declared the deputy education minister, Mohibul Hasan Chowdhury Nowfel, persona non grata in the DRU area for his organised campaigning against Rozina on social media.

They also rejected a committee formed by the health ministry after the incident.

Following a virtual hearing over an hour on Sunday noon, a metropolitan magistrate, Baki Billah, announced that he would give the decision within a shortest possible time after reviewing all the case documents.

However, an hour later, the magistrate announced that he would give the decision on Sunday.

Rozina has been languishing in Kashimpur Jail since Tuesday after another metropolitan magistrate Mohammad Jashim had set Thursday for a hearing on her bail.

Shibbir Ahmed Osmani, a deputy secretary of the health services division, filed the case on Monday night where he said Bangladesh was in negotiations with several countries for purchasing Covid vaccines and there were ‘non-disclosure agreements’ that the government signed to keep things confidential.

During the hearing, the metropolitan court assistant public prosecutor, Hamayetuddin Khan Hiron, claimed that the journalist had collected documents related the Covid vaccine procurements from China and Russia and there was this possibility of espionage as she got her hands of the ‘forbidden’ documents.

He also argued that there was a video leaked on social media where Rozina was seen begging an apology for her offence and the prosecution needed more time to submit the video to the court for further verification.

‘Please post any date in next week so that we can submit the video clip,’ Hamayetuddin added.

Breaking with tradition, the prosecution went live on Facebook during the bail hearing where Hamayetuddin referred to Rozina as Ghaseti Begum, who secretly conspired against the last independent Nawab of Bengal before in the Battle of Plassey in 1757.

In response, the defence counsel, Ehsanul Haque Samaji, argued that the case was ‘faulty’ and there was no mention of espionage in the first information report.

The so-called video has no merit to the court of law under the Section 24 and 25 of Evidence Act, and the seizure list of the case was not completed too, he said.

Ehsanul further argued that the case document did not even explain what exactly the document was and who was looking for it and how she was searched in the health ministry.

The story was a ‘concocted’ one, he emphasised while arguing that Rozina was prosecuted only for her reports on the corruption at the ministry.

The metropolitan magistrate later in his order allowed the prosecution to submit the video clip to the court.

The video which was taken by someone in the room where the altercation between Rozina and the ministry officials took place, shows officials interrogating the journalist while she said that she would be willing to give a written undertaking.

The journalist also requested officials to allow her to use her cell phone and meet the health secretary Lokman Hossain Mian.

Instead, an employee was was trying to squeeze Rozina’s throat in the video.

Rozina wrote several in-depth reports on corruption in the health sector amid the pandemic.

Human Rights Watch on Thursday said that the detention of journalist Rozina Islam was a major blow against media freedom and urged Bangladesh authorities to drop all oppressive charges against her.

‘Rozina Islam’s colleagues believe she was detained over her reporting on corruption and mismanagement in the public health sector, including the government’s response to the Covid-19 pandemic,’ said HRW in a statement.

‘Bangladesh authorities should produce evidence of wrongdoing or immediately release Rozina Islam and stop arresting journalists for doing their job, which is also to highlight governance flaws,’ said Brad Adams, the Asia director of HRW.

In a press conference, foreign minister AK Abdul Momen on Thursday said that the arrest of the journalist might tarnish the image of Bangladesh abroad.

After holding a protest rally at DRU premises, the leaders of the executive committee met information and broadcasting minster Hasan Mahmud at his residence and demanded unconditional release of Rozina.

Leaders of the LDA, a combine of eight left political parties, also demanded release of Rozina and taking steps against the officials of health ministry responsible for assaulting the journalist.

Bazlur Rashid Firoz, the coordinator of the combine who chaired the rally, called on all democratic political parties to be vocal in demand of release of Rozina.

Jatiya Party chairman Golam Mohammad Quader also demanded unconditional release of Rozina and termed the arrest as a pressure of the government on free press.

The journalists in Barishal, Pabna, Narsingdi, staged a demonstration to press home the demands.

Bangladesh Mahila Parishad in a statement condemned the arrest of Rozina.