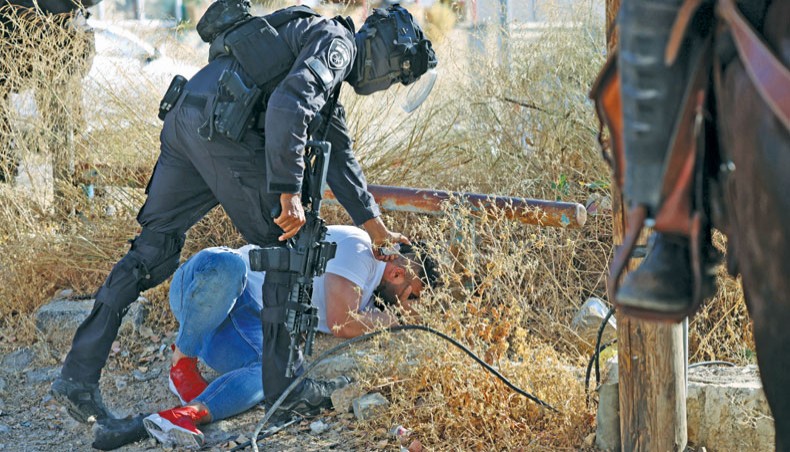 Israeli border police detain a Palestinian during protests against Israel’s occupation and its air campaign on the Gaza strip, at the flashpoint Sheikh Jarrah neighbourhood in east Jerusalem, on Tuesday. — AFP photo

Heavy air strikes and rocket fire in the Israel-Gaza conflict claimed more lives on both sides Tuesday as tensions flared in Palestinian ‘day of anger’ protests in Jerusalem and the occupied West Bank.

The UN Security Council was to hold an emergency meeting amid a diplomatic push to end the fighting, a day after prime minister Benjamin Netanyahu vowed Israel would ‘continue striking at the terrorist targets’.

Israel’s intense bombing campaign has killed 213 Palestinians, including 61 children, and wounded more than 1,400 people in Gaza in more than a week of fighting against Islamist group Hamas, according to the health ministry in Gaza.

The death toll on the Israeli side rose to 12 when a volley of rockets Hamas fired at the southern Eshkol region killed two Thai nationals working in a factory and wounded several others, police said.

Israeli strikes that again sent fireballs, debris and black smoke into the sky have levelled homes and multi-story towers, cratered roads and left two million Palestinians in the enclave desperate for reprieve.

‘They destroyed our house but I don’t know why they targeted us,’ said Nazmi al-Dahdouh, 70, of Gaza City who remained shocked by what he called ‘a terrifying, violent night’.

The humanitarian crisis deepened in the impoverished strip, from where Hamas has launched nearly 3,500 rockets at Israel since May 10, often forcing people living near Gaza into bomb shelters around the clock.

But a convoy of international aid trucks that started rolling into Gaza through a border crossing from Israel, Kerem Shalom, was halted when Israel quickly shuttered it again, citing a mortar attack on the area.

The UN Security Council session, the fourth since the conflict escalated, was called after the United States, a key Israel ally, blocked adoption of a joint statement calling for a halt to the violence on Monday for the third time in a week.

US president Joe Biden, having resisted joining other world leaders and much of his own Democratic party in calling for an immediate end to hostilities, told Netanyahu Monday night he backs a ceasefire, but stopped short of demanding a truce.

Biden’s national security adviser Jake Sullivan said he had spoken to his Israeli counterpart and the Egyptian government, a key intermediary, on Monday, saying that Washington was engaged in ‘quiet, intensive diplomacy’.

The French and Egyptian presidents, Emmanuel Macron and Abdel Fattah al-Sisi, are pushing for a ceasefire deal. Another channel has been opened, via the UN, with the help of Qatar and Egypt.

The conflict risks precipitating a humanitarian disaster, with the UN saying nearly 40,000 Palestinians have been displaced and 2,500 have lost their homes.

Fighter jets have hit what the Israeli military dubs the ‘metro’, its term for Hamas’s underground tunnels, which Israel has previously acknowledged run in part through civilian areas.

Israeli fire has battered crucial Gaza infrastructure, causing blackouts and prompting the electricity authority to warn Monday it only had enough fuel left to provide power for another two to three days.

A strike Monday knocked out Gaza’s only Covid testing laboratory, the health ministry said, and the Qatari Red Crescent said a strike damaged one of its offices in the enclave.

The rate of positive coronavirus tests in Gaza has been among the highest in the world, at 28 per cent.

Hospitals in the territory, which has been under Israeli blockade for almost 15 years, have been overwhelmed by patients.

Palestinians across the West Bank and in east Jerusalem mobilised Tuesday for protests and a general strike that shuttered non-essential businesses, in support of those under bombardment in Gaza.

Palestinian president Mahmud Abbas’s Fatah movement had called for a ‘day of anger’, a call echoed in Arab and ethnically mixed towns inside Israel.

‘We are here to raise our voice and stand with the people in Gaza who are being bombed,’ Ramallah protester Aya Dabour said.

An AFP reporter heard bursts of gunfire as thousands of Palestinian protesters faced Israeli troops north of Ramallah, with one soldier being carried away from the scene after an apparent leg injury.

The army said ‘a report was received regarding a shooting’ in Ramallah district.

Tensions again flared in east Jerusalem’s flashpoint Sheikh Jarrah neighbourhood, where Palestinian protesters faced off against police, ahead of a planned demonstration at the Damascus Gate entrance to the Old City, where hostilities have also surged in recent weeks.

Israel’s army said it had ‘neutralised’ an assailant attempting to attack soldiers in the West Bank city of Hebron on Tuesday. The Palestinian health ministry confirmed the man’s death.

The military conflict was sparked after clashes broke out at Jerusalem’s flashpoint Al-Aqsa mosque compound — one of Islam’s holiest sites — after Israeli forces clashed with stone-throwing Palestinians on May 7.

This followed a crackdown against protests over planned evictions of Palestinians in the Sheikh Jarrah neighbourhood of east Jerusalem.

Israel has been trying to contain violence between Jews and Israeli Arabs, as well as unrest in the occupied West Bank, where Palestinian authorities say Israeli forces have killed 21 Palestinians since May 10.