How to stop apartheid Israel 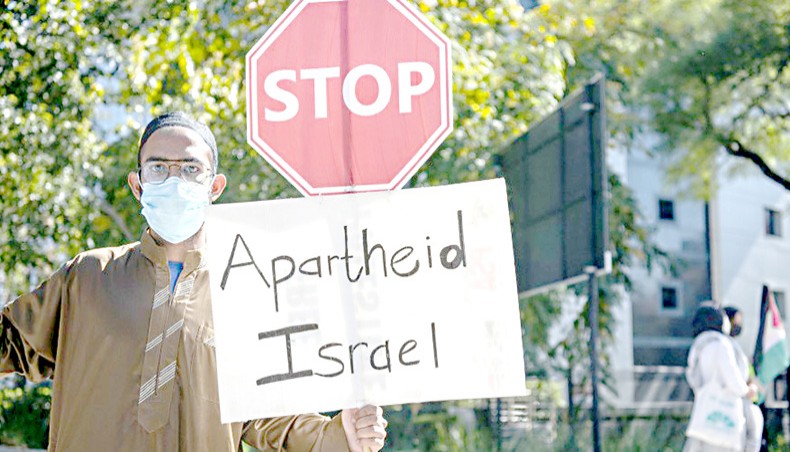 A group of South Africans hold banners during a demonstration to protest Israeli attacks on Palestinians at Masjid al-Aqsa in Jerusalem and Gaza Strip, on May 11, 2021, in Sandton district of Johannesburg, South Africa. — Common Dreams/Getty Images/Ihsaan Haffejee

South Africans, along with international humanity, raise the battle cry Mayihlome in solidarity with the Palestinian people’s just resistance – our anger rises for the battle. There can be no neutrality in the fight for freedom and justice, writes Ronnie Kasrils

NAKBA Day — 73 years since the onset of the ‘catastrophe,’ with Israel having believed Palestinian memories would have faded away has witnessed unity and courage of a people unbowed, relentlessly fighting for their land and rights, and resisting the last of the colonial monsters.

As in all anti-colonial struggles there is an agonising high price to pay. The death toll rises hourly in Gaza, the West Bank and throughout occupied Palestine. The international community cannot remain indifferent, and it has been uplifting for the beleaguered Palestinian people to see they are not alone in their struggle for survival.

Humanity’s voice and resolve must rise in sustained anger and to mourn and mobilise as the best way to respect the dead and wounded, the families grieving over the corpses of mothers, fathers, wives, husbands, venerable elders and broken bodies of children some still infants. At times virtually entire families obliterated. The spreading of awareness and the truth is necessary to break through Zionist Israel’s false narrative, the impunity provided by the west for its heinous crimes, and mainstream media disinformation. Our resolve is more vital with the barbaric onslaught on the people of Palestine as Israel warmongers — and a corrupt, desperate prime minister Benjamin Netanyahu — threaten unrestrained war and a final solution. This is a time for rededication as never before. We must protest our outrage at apartheid Israel’s war crimes, recognised as such in international law. By Sunday night: 188 Palestinians slaughtered, including 55 children — and 10 Israelis. As office blocks in Gaza are turned to rubble, one housing Associated Press and Al Jazeera offices, Israel’s intentions to obliterate media outlets along with Palestinian lives show its fear of the extent of its crimes reaching the outside world. So much for the claim that it is the Middle East’s sole democracy.

Palestinian comrades have asked us to break the criminal international support and appeasement of Israel and match their courage. It is imperative we confront the shameless complicity passed on from Trump to Biden, the legacy of US administrations since 1948. How macabre this Joe Biden is, asserting that Israel is justified in bombing Gaza in self-defence. How insidious the connivance of perfidious Britain, hypocritical France, shameless Germany, the repugnant regimes from Austria, Brazil, Hungary to India, Lithuania and Poland; the white domains of Australia and Canada; along with the treachery of spineless Arab states.

It is South Africa’s sacred duty to mobilise for Nakba Day every day; build the BDS campaign to new heights; rally to the defence of our Palestinian brothers, sisters and children. Stop Zionist liars in their tracks with the truth. Support international Jewish voices for justice, along with humanity, to expose Zionism equating criticising Israel with anti-Semitism and the flawed depravity of the International Holocaust Remembrance definition. Israel’s racism, complicity between the racist mobs and police, and history of colonial settlement shared by the west, has spread the poison of such xenophobia and let loose the pogroms so reminiscent of Czarist times and Kristal Nacht in Germany, 1938. There are Nazi era analogies. One of Ben Gurion’s own ministers, Aharon Cizling, stated after the Deir Yassin massacre in May 1948 — ‘now we have behaved like Nazis and my whole being is shaken.’ Einstein and Hannah Arendt warned of the rise of fascist parties in Israel that very year when Menachem Begin visited New York to raise funds. Future prime minister Begin, leader of the terrorist Irgun, and forerunner of Likud and the butchers Sharon and Netanyahu.

A desperate Netanyahu, seeing his prime ministerial post slipping away, and as a result the increasing likelihood of a prison term on corruption charges, grasps an escape route by fermenting war on besieged Gaza. The Israeli armaments industry is licking its chops at the opportunity to show off its latest and now once again war-proven hardware to greedy international warmongers and arms merchants. It’s time again for good business. Every time Gaza is demolished and lives crushed Israeli sales and shares rocket.

What Netanyahu and the criminal Israeli military did not bargain for was the way in which the eviction of Palestinian households in Sheikh Jarrar, and the sacrilegious assault on the Al Aqsa Mosque, shooting and beating those at prayer, would unite as never seen before the people of Gaza, West Bank and Palestinians living within Israel itself and the support in the diaspora.

President Biden gives Israel carte blanche right to defend itself against home-made rockets launched from within Gaza, even as support for Palestinian rights and condemnation of Israeli apartheid rise across the United States, including members of Congress. The spineless western governments and media bark their accent like poodles; former colonial powers with the same psyche as United States imperialism, never understanding that repression begets resistance. If those rockets came from Iran, they would have precision delivery mechanisms and would be far more sophisticated. No possibility of smuggling into the hermetically sealed Gaza Strip with Sisi’s Egypt dutifully guarding that back door. The rockets, fashioned from water piping, are a testament to the resistance’s inventiveness but hardly on a par with the most advanced ordinance in the world. Witness the disproportionate effect in casualties and destruction. The reason for the response to Israeli occupation and aggression is the justified anger of a people reacting against brutal racist oppression, colonial dispossession of land and rights, destruction of homes and property, murder of their children — for seven decades. That’s just how we South Africans reacted to the apartheid system. The cause of the response is the amazing resilience of a people the Israeli leader, Ben Gurion, an arch-racist and coloniser like South Africa’s unlamented architect of apartheid, Hendrik Verwoerd, told his followers in 1948, when he unleashed the terror and ethnic cleansing that saw 750,000 Palestinians driven from their homes and land, that the offspring of those set to flight would forget where they came from. The Palestinian people, including the youngest, who resist with stones, and some with rockets, are making a mockery of Zionist hopes. It is Palestinian dreams and fortitude that is winning the war as they show they are prepared to accept casualties in the bloody battles on their courageous road to freedom. We stand with them, righteous humanity, Christians. Jews, Muslims, all faith groups, believers and non-believers.

The need for sanctions until these crimes cease

IT IS imperative that we of the international community redouble our efforts to aid the Palestinian people in solidarity actions. The Boycott, Divestment and Sanctions campaign remains the most formidable weapon in our arsenal. It worked to bring about the demise of South African apartheid behind the internal people’s resistance struggle, and is growing in scope and efficacy, to the extent that Israel has identified the non-violent global movement as a strategic threat. Israel, like apartheid South Africa must pay for its crimes — above all by sanctions. We South Africans must continue to urge our government and the African states, to break off all relations with apartheid Israel. We must appeal to Africa to reject Israel’s sugar-coated bribes to ensnare them. We must apply full sanctions against the apartheid state and become an international standard bearer for the Palestinian cause. South Africa should convene an international conference of solidarity with Palestine aimed at discussing a programme of global action by governments, trade unions and civil society to isolate Israel, strengthen the BDS campaign, end the occupation, lift the siege of Gaza, dismantle the illegal settlements, remove the apartheid wall and separation barriers, ensure the right of return of all refugees, ensure freedom of access to East Jerusalem and the rights of Palestinians residing there, declare equal rights for Palestinians within Israel.

Israeli war criminals must face the International Criminal Court. Israel must pay reparations for all the death and destruction it has caused. Some will laugh because of the impunity in which Israel basks. What therefore is additionally required is a boycott of US products, everything from Coca Cola to Caterpillar Tractors, to pressurise the Biden administration and corporate business to end its strategic support for Israel, its $3.8 billion annual blood money of military hardware and aid — together with its diplomatic protection and the emasculation of United Nations resolutions that if implemented could shake Israel’s intransigence to the core. It is a crime against humanity to allow Israel to continue to crush Palestinian lives. The world must place the United States in the dock alongside Israel, an apartheid state. We accuse the western cohort nation states with the same crime of complicity.

South Africans, along with international humanity, raise the battle cry Mayihlome in solidarity with the Palestinian people’s just resistance — our anger rises for the battle. There can be no neutrality in the fight for freedom and justice. A people united will never be defeated. Palestine will be free from the river to the sea — for all who live there in peace, equality and security.

CommonDreams.org, May 17. Ronnie Kasrils is a former minister in the South African government. He was a member of the national executive of the African National Congress and a founding member of uMkhonto we Sizwe.